Retrotainment’s 8-bit game will be on cartridge, along with a contemporary console and PC release. 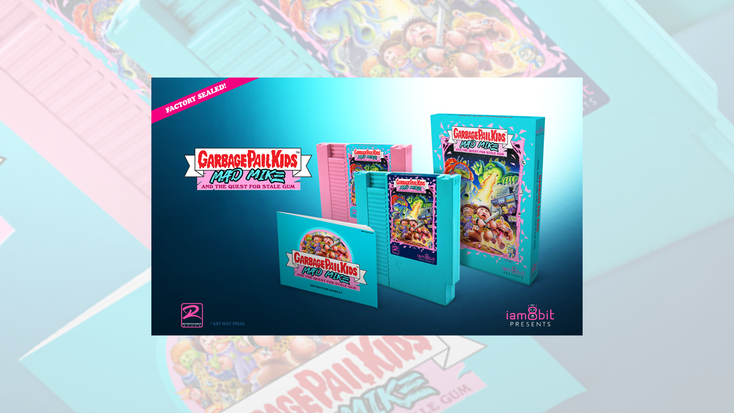 Art for “Garbage Pail Kids: Mad Mike and the Quest for Stale Gum.”Topps
A

NES video game has been released. In collaboration with iam8bit Retrotainment and under license from

, “Garbage Pail Kids: Mad Mike and the Quest for Stale Gum” cartridges are now available for pre-order on Iam8bit.com.

The 8-bit platformer will be available digitally for console and PC on Oct. 25, supported by quality-of-life features and bonus content developed and curated in partnership with the team at Digital Eclipse.

“For years, we’ve wanted to bring the Garbage Pail Kids to life in 8-bit form,” says Tim Hartman, producer, Retrotainment. “We’re honored that Topps allowed us to give GPK the game it’s deserved for 30+ years.”

Depending on the challenge, players can instantly swap between each Kid. Side-scrolling levels including Egypt, Transylvania and Hell, are part of the game. Players can collect and trade 8-bit versions of the official Garbage Pail Kids cards, including some they can use in battle (like Adam Bomb). Minigames  including porta-potty fishing round out Retrotainment’s tribute to Garbage Pail Kids and classic retro games.

“Looking back with fondness is fun, but our joy for publishing Garbage Pail Kids, as an NES game resurrected from a bygone era, comes from a forward-looking place,” say Jon M. Gibson and Amanda White, co-owners, co-creative directors, iam8bit, in a joint statement. “To make a game within the limitations of what’s possible while deploying NES development tools requires a lot of imagination. More than 35 years later, it’s pretty amazing how much more is possible, given the ingenuity of a dedicated fan base to break and remake codebases. So that’s what the Garbage Pail Kids game is – a relic from the past, seen through the lens of the present and developed by the maestros of old-school themselves, Retrotainment Games. It’s a perfect fit for iam8bit Presents.”

“The Garbage Pail Kids: Mad Mike and the Quest for Stale Gum” NES cartridge comes in two randomly distributed color variants: Mad Mike Blue and the ultra-rare Stale Gum Pink. Both are packaged in a high-quality retro box and sleeve with a premium full-color instruction booklet and four jumbo 5“ x 7” trading cards featuring the cast of playable kids. Pre-orders also come with a download code for the digital edition at no additional cost. Cartridges are expected to ship Q1 2023.

The digital edition will be available for download Oct. 25 on PlayStation 4 (PlayStation 5 via backward compatibility), Xbox One (Xbox Series X|S via backward compatibility), Nintendo Switch and PC via Steam. It includes Retrotainment’s complete game and extras developed by Digital Eclipse, the team behind retro collections including “The Disney Afternoon Collection,” “Teenage Mutant Ninja Turtles: The Cowabunga Collection” and the upcoming “Atari 50: the Anniversary Celebration.”