Orchard shares the vision and history of one of BBC’s top animated series. 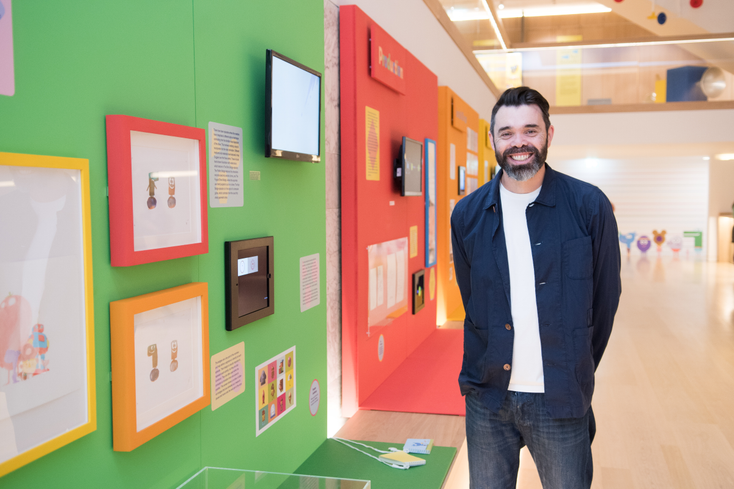 According to BBC, “Hey Duggee” has become the No. 1 preschool plush property. This demand stems from a few key elements at the heart of the show: the signature clean design of the series that differentiates “Hey Duggee” from the wider market, the distinctive character styling of Duggee and the Squirrel Club and the careful attention to content, bringing both kids and parents together. This is what Grant Orchard set out to create, gaining ground as a globally growing brand with the help of BBC Studios.

Having worked with Studio AKA to come up with the idea for a show, which engaged active children and gave families ideas of what to do together, and having two of his own, Orchard’s ideas for “Hey Duggee” began to come together.

“I came up with the idea for a show called ‘Chop Chop,’ which was based around fun activities,” says Orchard, Studio AKA. “I’ve got two boys who are older now but were really active and quite draining, and we wanted a show that would give us ideas of things to do and

to watch with them. That was the holy grail; that’s what we really wanted at the time. Then, about 2012, we did the first sketch for ‘Hey Duggee,’ which is upstairs and crazy to think that it’s in the Design Museum. After 18 months of development off and on, the BBC came on board, and we produced 52 episodes relatively quickly.

“All the characters are all relatively simple and cleanly laid out, apart from Duggee who is more complex,” adds Orchard. “We don’t have any overlapping action, and that was just a way of making the show clear and concise for the children watching. The less elements we had, the easier it was to produce, and we didn’t want line work but, in the end, no matter how you do it, it’s always going to be hard work. We never thought about it in terms of licensing. We wanted clear and distinct characters that would be attractive to kids who would just enjoy it.”

Never originally setting out to create “Hey Duggee” with a view of licensing, the content came from design, production and storytelling technique, all coming together to build a show both kids and parents would love. This, in turn, a runaway hit show developed that is growing a dedicated fan following and, as a symptom, driving an effective licensing strategy.

With a 1600 percent increase in retail toy sales across 2018, the second-fastest growing preschool brand to date this year under “Peppa Pig” and the best performing preschool property in apparel at TU, the following for “Hey Duggee” has created an organic demand for product.

“The fact that it’s so enjoyed by kids, they have such an emotional connection and it works on two levels with parents as well, it makes it a shared experience, and that in turn helps us with licensing,” says Harriet Newby-Hill, brand director, children’s, BBC Studios. “It’s on the parent’s radar, and they’re happy to see kids in clothes that are a TV tie-in but really design-led and beautiful, or play with toys that take that on-screen fun to off-screen. The fact Grant and the team has focused on creating a show for kids and parents to just enjoy together, makes our passage to licensing quite clear given that it’s not started with play patterns and vehicles; that’s not its genesis.”

“I think the massive factor is the parent engagement,” adds Orchard. “Our theory was if we can get kids watching with kids, and the parents start laughing, they would think there’s something to enjoy there. They’re being led by their parents’ enthusiasm for it. It was a holy grail. If we got that, it would be brilliant. To see parents adopt it as their show, just as much as the kids, that’s amazing. We thought that could be a good in-road for people watching multiple times, but we didn’t want parents to turn around and say, ‘I’m now officially sick of this show.’ That’s always going to happen at some point, but if we can delay that, it’ll be an achievement!”

And today, “Hey Duggee” speaks for itself, with more than 3.6 million app downloads, more than 200,000 fans on Facebook and nearly 35,000 on Instagram. The most-watched children’s TV episode in the U.K. this year, the “Hey Duggee” toothbrushing episode ranks this preschool property as one of the most-watchable series aimed at both parents and children.

Joining BBC Studios, Studio AKA and Grant Orchard himself to view an exclusive preview of series 2, arriving Nov. 11 on CBeebies,

saw the nods to the parents firsthand with inside jokes during time travel, expertly executed voiceover acting and a genuine care for the delivery of content. The licensing program, delivered to huge demand by BBC Studios, is just the beginning of a new brand that is readying for global acclaim.