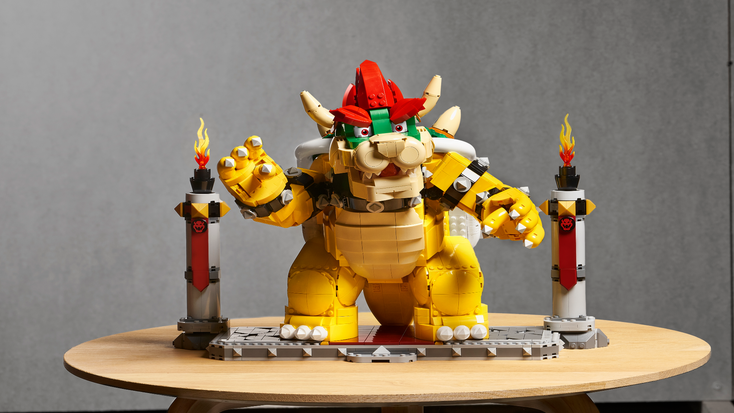 has announced the latest addition to the

LEGO's "Super Mario:" The Mighty Bowser building kit is a detailed recreation of the King of the Koopas, complete with controllable movements. The moveable figure will use newly-designed elements to recreate the look of Bowser's spikes and have a fireball launcher and a button to control Bowser's head and neck movements. His mouth, arms, legs and tail will be movable as well.

The set is the latest release from the LEGO and

. The adult line incorporates a range of "Super Mario"-themed building kits, including a

with levels from the "Super Mario" 64 game inside.

"Bowser is, quite simply, the ultimate boss – and we're delighted to announce that we're introducing this oversized version to the LEGO' Super Mario' adult line for a little added

peril," says Carl Merriam, senior designer, LEGO "Super Mario." "Since we launched LEGO' Super Mario' two years ago, we've been on such a journey – gradually expanding with the most iconic and recognizable characters of the LEGO' Super Mario' universe. Adding LEGO 'Super Mario:' The Mighty Bowser is a blast from the past for many Adult Fans of LEGO. He might be the big boss, but he still brings back a warm feeling of nostalgia to adult Super Mario fans worldwide. Just as defeating Bowser was always the ultimate challenge in the Super Mario games, here we're challenging fans to build the King of the Koopas from nearly 3,000 pieces. We know they're up to the task and will be chomping at the bit to get their hands on this great new addition to the Super Mario line."

The Mighty Bowser also has an interactive element. Fans that own a LEGO "Super Mario" Starter Course can choose to battle Bowser against LEGO Mario, Luigi or Peach.