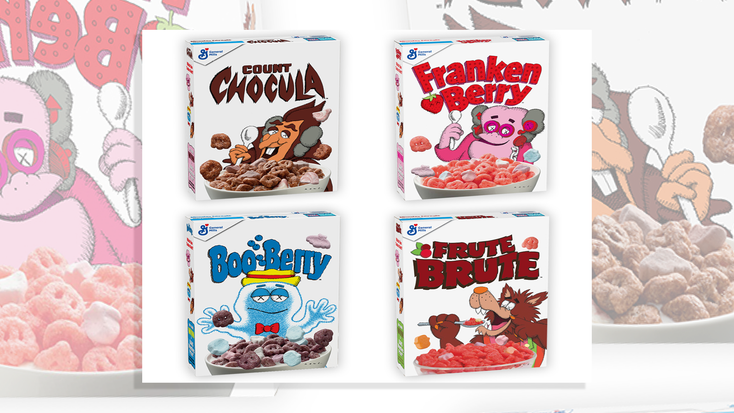 ’ Franken Berry, Count Chocula, Boo-Berry and – for the first time in nearly a decade – Frute Brute Monster Cereals are back with the limited-edition release of boxes designed by the American artist, Kaus, who has previously designed cereal boxes for

Inspired by classic horror film characters, the Monster Cereals have been around for over half a century. This year, Monster enthusiast Kaws was inspired by the vintage styling of the original boxes. In addition to the individual box designs, Kaws has also designed corresponding collectible cereal prizes of each of the character, which are available as a set of four via an on-pack sweepstakes.

“It’s been a thrill to collaborate with General Mills and Monster Cereals,” says Kaws. “I’ve been a big fan of the cereals since I was a kid. Even now, I love the original box designs and the creativity and imagination they invoke.”

This year’s seasonal Monster debut is also marked by the return of Frute Brute, which

joins the other monsters on shelves with its first appearance since 2013, as well as other spooky surprises to come later this fall. Frute Brute is known for its “howlin’-good taste of fruit” and is considered by many collectors to be the most sought-after vintage cereal, in part due to its appearances across various blockbuster movies in the 1990s.

“Our Monster Cereals are some of our most iconic, and while we know fans are always excited to see them, we want to be sure that we’re able to offer something new and different with each release,” says Mindy Murray, senior marketing communications manager, General Mills. “Kaws’ love for these characters made him the perfect partner to bring them to life and offer multiple ways to celebrate this season. We can’t wait for fans to find each box and experience the latest versions for themselves.”

Franken Berry, Count Chocula, Boo-Berry and Frute Brute Monster Cereals boxes are available now at retailers nationwide. Each Monster Cereals box comes with a unique code on the back that fans can enter on Kawsmonsters.com for a chance to win a set of the Kaws-designed collectible prizes.