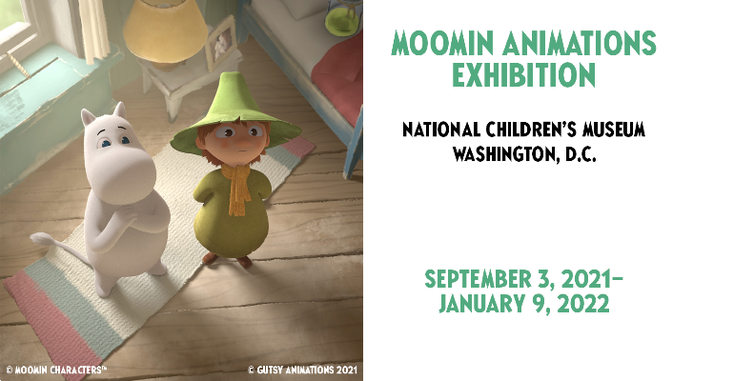 Gutsy Animations’ “Moominvalley” series will be featured as part of a new “Moomin Animations – Thrills and Cuddles” exhibition at the National Children’s Museum in Washington D.C, running from Sept. 3 until Jan. 9.

The upcoming exhibition, on loan from the world’s only Moomin Museum located in Tampere, Finland, marks the first time “Moomin Animations – Thrills and Cuddles” has travelled internationally. The exhibition highlights the history of “Moomin” animations, which are based on the “Moomin” books and comic strips created by the renowned Finnish artist and author, Tove Jansson.

During the exhibition, visitors will have a chance to explore how the “Moomin” stories have evolved from the first “Moomin” film to premiere on TV, a 1959 German marionette animation film, through to Gutsy Animations’ 3D animated series, “Moominvalley” in 2019. The exhibition is brought to the U.S. by the Embassy of Finland in Washington D.C.

A program of hybrid events, recordings and workshops will also be offered

during the exhibition, including a “From Pencil to 3D” live-streamed session which will showcase the production of an animation from script to screen with “Moominvalley” episode director, Jay Grace. Additionally, “Moominvalley” composers, Samuli Kosminen and Jarmo Saari, will host an online session exploring how the series’ score was composed, what inspired them and the type of instruments used during the recording. Screenings will also be held featuring music videos from the “Moominvalley” series.

“The National Children’s Museum has an impressive reputation for offering U.S. families engaging and inspirational STEAM-focused experiences, making it the perfect home for the ‘Moomin Animations – Thrills and Cuddles’ exhibition’s first overseas journey,” says Marika Makaroff, chief creative officer and founder, Gutsy Animations. “We can’t wait to give visitors the chance to explore how we’ve adapted and brought Tove Jansson’s beloved stories to life through our ‘Moominvalley’ TV series and to celebrate the universal values of the Moomins – equality, inclusion and respect for nature.”