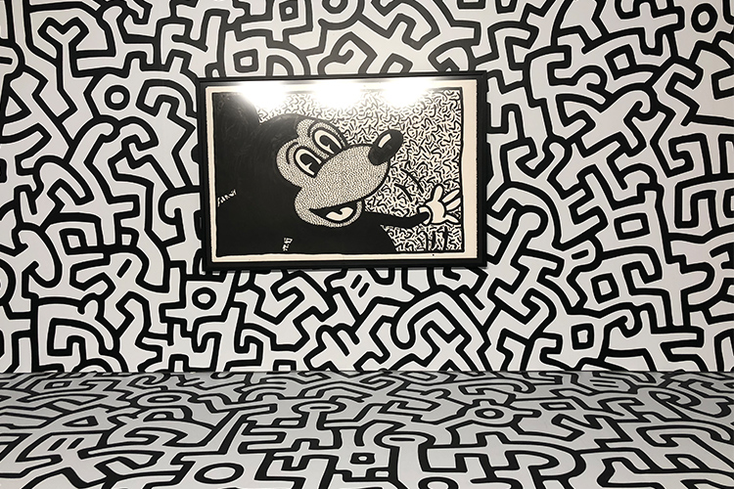 Situated below the High Line, a decorated glass building invites curious observers on a tour of more than 16,000 square feet of Mickey Mouse history. At Mickey: The True Original Exhibition, ten curated rooms chart Mickey's impact, from his beginnings as a sketch, through his initial appearance in "Steamboat Willie"- the first-ever animated short to feature synchronized music and sound-into his current phase as the muse for several modern art pieces and consumer products.

"Since 1928, Mickey has been a conduit between public art and everyday life, directly influencing a diverse lineage of contemporary artists who have created work that engages with his recognizable image," reads an exhibit wall.

graffitied walls, a recreation of the set of the "All New Mickey Mouse Clubhouse" (1989-1994) set (sans Britney Spears and Justin Timberlake) and a Mickey Mouse hat customization bar.

Most of the elements within the gallery were custom designed by Disney animators including the ice cream packaging seen at the Ample Hills Creamery stand and Steamboat Willie animations, that positions original studio drawings alongside the work of young animators.

"A lot of businesses are so trend-driven so as long as we are keeping the character and the story true to who that character is, we're allowed to play around graphically. For this project, we wanted to go back to the original short and do a 3-D project. We cut them into little scenes and assigned each scene to an animator, team of animators or designers and we synchronized their animation to the original soundtrack and asked them to be as graphically interpretive as they wanted. One of the neat things is that we're incorporating every style of animation. Its almost like a history of animation in one short where you have the drawn, CG, stop-motion, claymation and so much more," says John T. Quinn, director, character art, Disney Consumer Products and Interactive Media.

The best part? Visitors are invited to wander through each room as whim;  to take pictures with art pieces that have been custom designed for the space; and to take in small doses of information that situates Mickey Mouse not only as a character but a reflection of the society he was born out of. As one plaque reads " Perhaps the reason why Mickey is so widely recognized is because he is a character who reflects humanity - with all of our triumphs and imperfections."

Consumer products featured in the exhibit include: