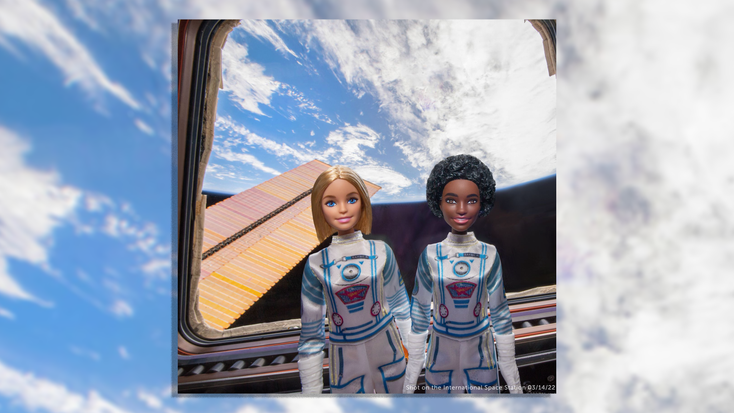 Mattel
Mattel has announced that Barbie is embarking on her first mission to space in the doll's 63-year history. In collaboration with the International Space Station (ISS) National Lab on

"Barbie introduced an astronaut doll in 1965 before humans had even stepped foot on the moon," says Lisa McKnight, executive vice president, global head, Barbie and dolls, Mattel. "Now, almost 60 years later and with 200 careers and counting, Barbie dolls have made it to space. It is important that we encourage girls to reach for the stars – literally – and pursue careers in aerospace and STEM. With help from the International Space Station National Lab team, we are reminding girls that not even gravity can hold them back."

After launching into orbit, two Barbie dolls received an out-of-this-world tour of the ISS, including the Cupola, ISS observation module, Veggie Garden,

and Minus Eighty-Degree Laboratory Freezer (Melfi), along with an introduction to the ISS' free-flying robots, the Astrobees. After the Barbie dolls return from space this Summer, the two dolls will be donated to the Smithsonian's National Air and Space Museum. Later this year, they will go on display at the museum's Steven F. Udvar-Hazy Center in Chantilly, Virginia.

As part of Barbie's first trip to space, the brand will be releasing a special edition episode of the brand's "You Can Be Anything" series, which showcases digital content featuring conversations with female role models. The episode, titled "You Can Be Anything: Mission DreamStar – Let's Go To SPACE!" is now on YouTube and will highlight careers in space, providing young girls with virtual access to the ISS and helping inspire a life of space exploration.