Film concert series to feature past and current DC films plus upcoming films from the DC Universe. 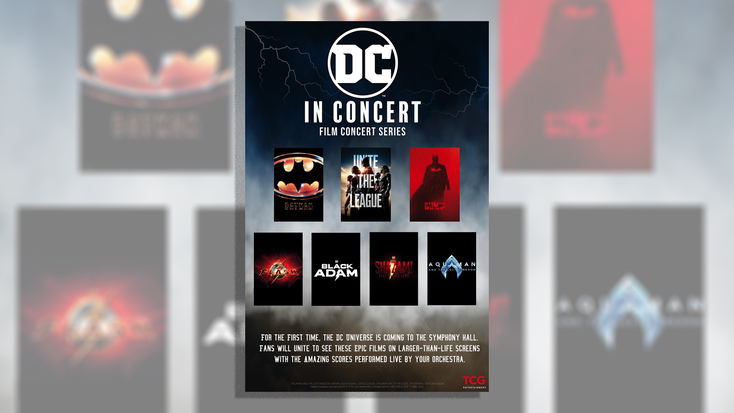 in Concert,” a new global touring film concert series featuring the live symphony orchestra performing every note from the DC Universe films. From “Batman” (1989) and “Justice League” (2017) to the most recent release, “The Batman” (2022), fans can experience the scores played live as the films are projected on screens.

“DC films are global sensations, inspiring audiences and millions of fans around the world with captivating storytelling, characters and music,” says Peter van Roden, senior vice president, Warner Bros. Themed Entertainment. “The films in this series are some of the most recognizable from the DC Universe and we’re looking forward to taking the cinematic experience to the next level, giving fans a whole new way to experience the scope of their favorite DC movies with the iconic scores being performed live.”

“We are thrilled to be working with Warner Bros. Themed Entertainment on this amazing project,”

says Stephen Cook, founder and president, TCG Entertainment. “The ‘DC in Concert’ series is a groundbreaking project that will bring not only iconic DC films like the original ‘Batman’ and ‘Justice League’ to the concert hall but also new and future releases such as ‘The Batman’, ‘Black Adam,’ ‘The Flash.’ TCG Entertainment is humbled by the trust that has been put in us and we will deliver amazing shows for DC fans around the world.”

The “DC in Concert” series lineup will include “Batman,” “Justice League,” “The Batman,” “Black Adam,” “Shazam! Fury of the Gods,” “Aquaman and the Lost Kingdom” and “The Flash.”

Release markets and schedules to be announced later this year. For information and updates, visit TCGEnt.com.