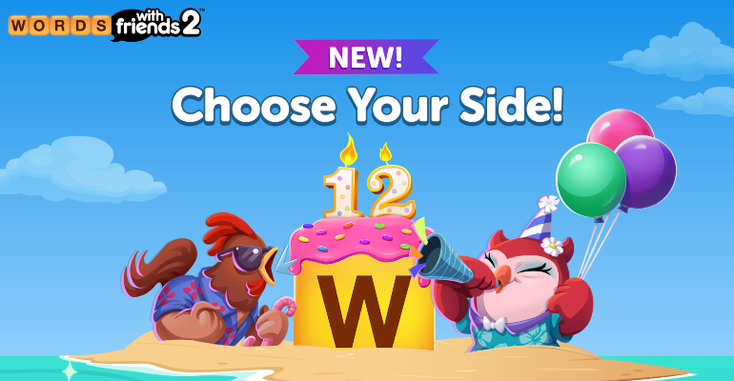 Zynga, an interactive entertainment brand, announced that in conjunction with the game’s 12th birthday, July 19 has been proclaimed “National Words With Friends Day.” This holiday kicks off a two-week, in-game festival for fans featuring a slate of gameplay events, challenges, special celebrity guests and sweepstakes.

To introduce an all-new feature, from July 19-25, players can participate in a community-wide competitive event called “Choose Your Side.” Week two of the birthday bash brings a new take on the game’s single-player mode, as real-life social media influencers will star as the opponents in the “Influence This!” Solo Challenge. Running from July 27-Aug. 1, celebrities will represent each rung in the challenge ladder, featuring voice actor, Christy Carlson Romano, “Mom Worthy” podcast hosts Britt and Sami, reality TV star, Victor Arroyo and music artist and vlogger, Lo Beeston.

Throughout the entire festival, players will have the opportunity to turn their “Words With Friends” birthday

“Mark your calendars: ‘Words With Friends’ is more than just a game; it’s part of our culture and our vernacular,” says Bernard Kim, president, publishing, Zynga. “Over the past 12 years, it’s grown from a popular app to a global sensation, and we’re excited to celebrate this first annual national day and festival with our fans in the game we all love.”