The Raft of 'Assassin’s Creed Valhalla' Goods Landing at Launch

After the first “Assassin’s Creed” video game graced our screens, the brand has grown with every new title. Now, as Valhalla prepares to launch this week, License Global looks at the goods celebrating the arrival of a new chapter in the legacy. 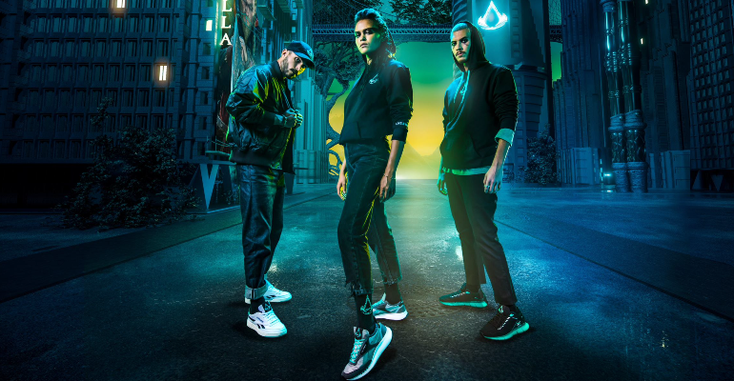 From Christmas jumpers to face masks and figurines, the collabs coming out of “Assassin’s Creed Valhalla” is an homage not to the game, but to the fans.

With over 100 million players, 10 games and 16 years spent telling the story of countless timelines,

to take the brand even further in May.

The cultural phenomenon has recently found its way to the Netflix writer’s room and a family-friendly, conflict-free “discovery” version is due for

, the entertainment and educational potentials of the “Assassin’s Creed” brand are endless.

However, with the game due to launch tomorrow, we look at some of the products due for launch across the consumer product space.

Kinetica and CL Legacy adaptations – are imbued with the brand logo, teal colors and unique design featured throughout the game with slogans. The sneaker line is also complemented by baseball caps, hoodies and apparel.

, a comic series written by Cavan Scott, illustrated by Martin Tunica and colored by Michael Atiyeh. In this prequel to the game, fearless Vikings Eivor and Sigurd embark on separate adventures to show their mettle and seek glory.

novel, written by Matthew J. Kirby, will tell an original story set in the world of the game. Players will discover the tale of Geirmund Hellskin, a man determined to prove his worth as a Viking and a warrior who joins the ranks of King Guthrum’s army to participate in the invasion of England. The book cover will be revealed on renowned Korean artist Jung Gi Kim’s Instagram account later this month.

Ubisoft’s rapidly growing Chibi Figurine range of collectibles not only include the characters of “Rainbow Six Siege” and “Watch Dogs” but now the digital cast of “Assassins Creed Valhalla”. Launched in August 2020 by Ubicollectibles, Ubisoft Heroes captures its fan-favorite characters and even collaborated with Baccarat for a limited edition “Assassins Creed” figurine for competition participants for season one, with Valhalla’s main character Eivor a prominent feature of season 2.

With over 132 SKUs, the new line of apparel from Difuzed takes the iconic “Assassin’s Creed” logo and transforms it into a creative display of fandom to celebrate the latest line. Badges, t-shirts, baseball caps, backpacks, keychains, wallets, hoodies and apparel for fans of all origins are widely available and reflects Difuzed’s longstanding relationship with Ubisoft and the Assassin’s Creed brand.