From major executive moves to a host of acquistions and joint ventures to an increased emphasis on 360-degree entertainment properties and classic brands, here are the top trends that shaped 2016 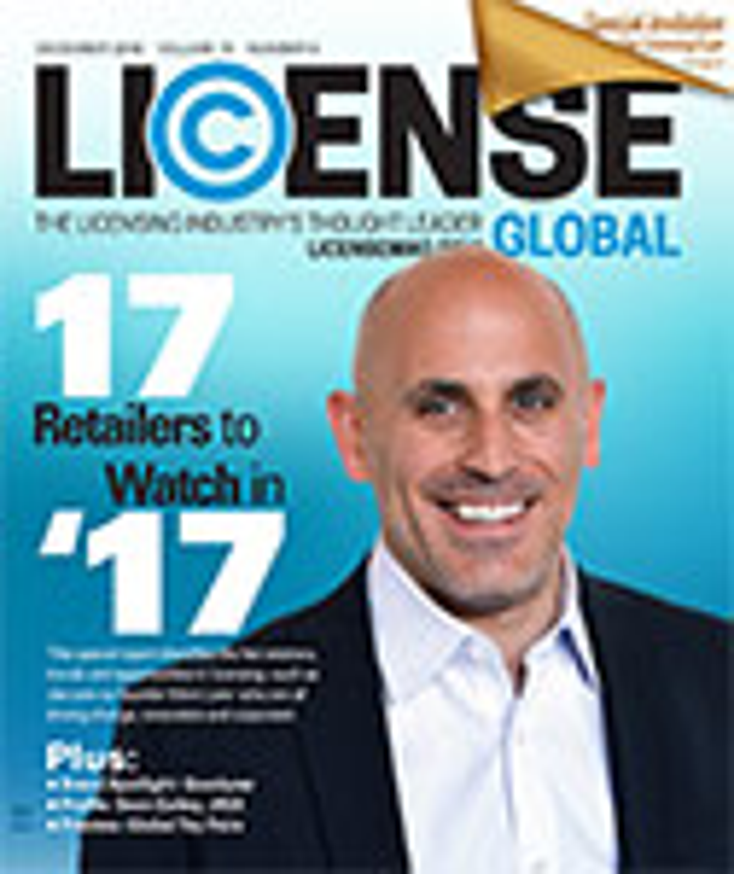 From major executive moves to a host of acquistions and joint ventures to an increased emphasis on 360-degree entertainment properties and classic brands, here are the top trends that shaped 2016

Last year was marked by a chain of acquisitions and joint ventures among several of the world's top licensors and agents, including NBCUniversal, AT&T, Walmart, Global Brands Group, Creative Artists Agency and more.

Furthermore, 2016 saw a large number of change-ups in top leadership at big-name entertainment companies such as Disney Consumer Products and Interactive Media, Warner Bros. Consumer Products, NBCUniversal, WME/IMG, Viacom and Discovery Communications. In addition to the entertainment powerhouses, several agencies, including CPLG and Iconix, as well as the International Licensing Industry Merchandisers' Association announced changes to their top leadership positions.

Meanwhile, a raft of brands continued to expand their 360-degree strategies with the addition of new content development across television, publishing and more; live experiences such as stage shows and theme parks; and, of course, a multitude of new licensees.

Possibly the biggest merger of the year was Global Brands

Meanwhile, Hollywood was profuse with ownership changes in 2016. NBCUniversal acquired DreamWorks Animation in April, which not only brought together two entertainment powerhouses, but also the No. 11 and No. 18 largest licensors in the world. The acquisition also bolstered NBCU's kids' and family entertainment offerings with DreamWorks' various franchises such as

The Dalian Wanda Group was also a big player in the entertainment industry last year with the acquisitions of AMC, Legendary Entertainment and the Chinese online media outlet and e-commerce platform Mtime, as well as a joint venture with Sony.

Additionally, AT&T made an $85 billion bid for Time Warner, which solidified its growing interest in the entertainment sector. Although it is still too early to tell, the acquisition could result in a host of opportunities for licensed products targeting bigger audiences and new fan bases.

In a completely different sector, retailer Walmart ramped up its e-commerce initiatives with the purchase of

, one of the fastest growing e-commerce companies in the U.S. According to Walmart, the acquisition will add new capabilities to its e-commerce platform as well as expand its customer reach.

Finally, in early 2016, Activision bought eSports leader Major League Gaming, which develops professional gaming events. The purchase not only adds live streaming capabilities to Activision's roster, but will also further enable the video game company to expand its reach across the rapidly growing eSports industry while creating what they deem "the ESPN of eSports."

Similar to 2015, last year was marked by a multitude of executive change-ups from the world's major licensors, starting at the top with Disney Consumer Products and Interactive Media. In February, James Pitaro moved from his role as co-chair of DCPI to head the division, following co-chair Leslie Ferraro's departure from the company to pursue marketing and consumer engagement projects.

Meanwhile, Warner Bros. Consumer Products, the world's No. 5 largest licensor, named Pam Lifford to succeed Brad Globe, former president of WBCP, who announced his retirement in August 2015 after more than a decade at the helm. As WBCP's president, Lifford oversees all of the division's business functions, including domestic and international licensing, worldwide marketing, business and legal affairs, finance and retail business development for WBCP's portfolio of franchises including

Other major executive moves in 2016 include:

Although 2016 revealed a raft of new properties, classic brands such as "Star Trek" and "Rugrats," among others, saw a resurgence through new products, original programming, live events and more.

Defining what it means to be a true evergreen property, the "Star Trek" brand marked its 50th anniversary last year, and is looking ahead to the next 50 years with a new TV series that is set to premiere on CBS in the first half of this year. To mark the milestone, CBS Consumer Products unveiled a wide-reaching merchandising and fan outreach program spanning collectibles, apparel, toys and more.

Meanwhile, Nickelodeon unveiled a number of '90s-themed products in 2016–ranging from apparel to stationery to electronics and more-for brands including "Double Dare," "Ren & Stimpy" and "Rugrats." Beyond Nickelodeon, other classic brands–including Care Bears, Felix the Cat and "Teletubbies"–were revived through a combination of new merchandise, agency appointments and re-booted TV series.

Furthermore, entertainment companies around the world were able to both give their classic franchise new life, and extend their current properties through a variety of live experiences. Children's favorites like "Sesame Street" and "Paw Patrol" unveiled global live shows; Pepsi unveiled its first U.S.-based restaurant; Paws, Inc., the licensor of Garfield, teamed for children's education and activity centers in China; Viacom grew its footprint with new Nickelodeon Family entertainment centers in Europe; and Studio 100 partnered with grocery retailer Lidl to create "Maya the Bee"-inspired playgrounds; among many more.

Other Top Stories from 2016