Keanu Reeves, ‘Fortnite’ and the Potential of In-Game Licensing

Learn how licensing is helping brands reach a massive audience of gamers. 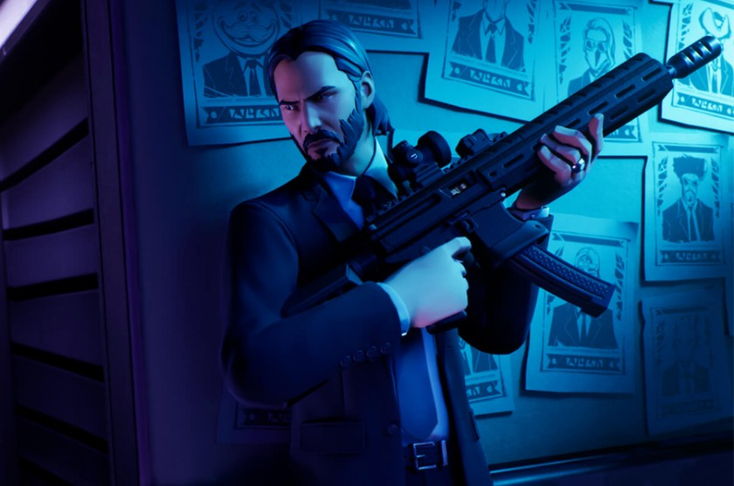 How do you know Keanu Reeves?

Do you know him as Neo from

? The eponymous John Wick from the famed action trilogy of the same name? Maybe as Johnny Utah, the undercover cop/surfer, all-around-cool-guy from

If you’re like one of the thousands of kids who met Reeves at E3 this year, your answer might actually be that you know the actor as the “‘Fortnite’ Guy.” The

that while walking the halls of this year’s massive video game convention, gamers approached him in droves to ask for a picture with who they thought was the guy who inspired the latest “Fortnite” character skin, Reaper. The battle royale game’s skin bore a striking resemblance to Reeves, so much so, in fact, that the creators of “Fortnite” partnered with the actor to create a John Wick-styled character skin.

Reeves’ anecdote about being the “‘Fortnite’ Guy” speaks to the game’s massive influence in pop culture. Nearly everyone

is a gamer in some form, whether that’s playing “Pokémon Go” on a mobile phone or “Call of Duty” on a PS4. This expansive medium of entertainment has proven lucrative for licensing, and companies are now getting creative with the ways they bring their brand into the gaming sector.

Character skins, like the ones in “Fortnite,” have proven valuable for getting brands in front of a new audience. These cross-promotional licensing deals are a unique way to ingratiate a character into the video game space without spending the capital on creating a game that lacks community buy-in. Famed IP such as Reeves’ John Wick and Chief Hopper from

have already jumped into the consciousness of gamers with in-game collaborations.

‘Fortnite’’s Descent into the Upside-Down

Aside from the Keanu Reeves mashup, “Fortnite” developer Epic Games has also done some clever licensing work with other non-gaming properties, such as “Stranger Things.” The Netflix original series just launched its third season, and to capitalize on the debut, the streaming giant partnered with Epic Games on limited-edition “Fortnite” content.

The timing of show-inspired character skins and locations makes sense, as the series just launched its latest string of episodes. However, such a move would also align perfectly with the modern ecosystem of gaming, where studios launch a free-to-play game that relies on continual new additions that can be purchased as add-ons (i.e., skins and levels).

Licensing in-game content is just now playing a major role in today’s gaming landscape, but as more companies copy the business model, it’s bound to become a more common tactic. It can take a game that has been on the market for months, or even years, and provide a steady-stream of new content that keeps gamers coming back. Not to mention, it leverages the cultural zeitgeist to make something old new again.

Downloadable content is just one aspect of the new model of game development. The second major aspect of a successful game franchise is competitive gaming opportunities. Esports competitions are a major part of a property’s success, as the

orum reports that the space could rake in revenue of more than $1 billion annually in the next two years.

One of the first to take advantage of the success of competitive gaming was Nintendo’s “Super Smash Bros.” franchise. The grandfather of esports fighting games started out in tournaments dating back to 2002 and carried on to the present day with the most recent release in the series, “Super Smash Bros. Ultimate.” Nintendo’s franchise was also one of the first to license third-party properties as in-game characters.

In 2008, “Super Smash Bros. Brawl” debuted with new characters from Sony properties including Sonic the Hedgehog and Solid Snake of “Metal Gear Solid.” That licensing deal with Sony marked the beginning of the third-party licensing craze in gaming that since led to the “Fortnite” deals and others by the likes of

. For both gaming companies, the deal was perfectly synergistic, as esports professionals go on to use third-party characters in competitions around the world.

Gaming is the most popular form of entertainment in the world. It’s also at the forefront of revolutionizing how entertainment works in terms of retail and licensing. From free-to-play to esports tournaments, gaming companies have turned their properties evergreen.

This paradigm shift provides ample opportunities for licensing in-game and bringing characters in front of a whole slew of new consumers. These can be synergistic deals for many character and entertainment brands looking for ways to market their properties in front of a massive audience. And if you don’t believe that’s the case, just remember, a bunch of kids at E3 thought Keanu Reeves was a “Fortnite” character.

To learn more about video game's potential in licensing, be sure to visit the

at this year's Brand Licensing Europe 2019.