The popular card game has launched its first-ever licensed version. 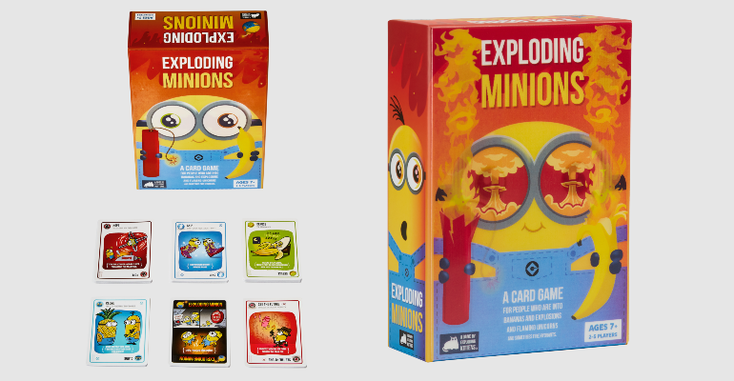 Tabletop game creator Exploding Kittens has announced the launch of its first licensed game, “Exploding Minions,” in collaboration with Illumination and Universal Brand Development. Inspired by animation franchise “Minions,” the themed edition of the flagship Exploding Kittens card game is made for kids and adults to enjoy together. “We’re excited to combine one of the biggest card games with Illumination’s global pop-culture phenomenon, the Minions, to create a new family game night essential,” says Elan Lee, co-creator and chief executive officer, Exploding Kittens. “Exploding Minions marries these two universes to create a simple yet strategic game for all to enjoy.” Exploding Minions is a family-friendly spin-off of the core Russian Roulette-style game that includes new card types and illustrations of Minions as imagined by The Oatmeal. To play, participants take turns drawing cards while trying to evade the Exploding Minions. Players can avoid exploding by using strategies and cards. The last player who hasn’t exploded wins. Exploding Minions is available at Target retail stores, Target.com and ExplodingKittens.com, with availability at Walmart later this summer.