Skateboarder Sky Brown has received a Barbie in her likeness. 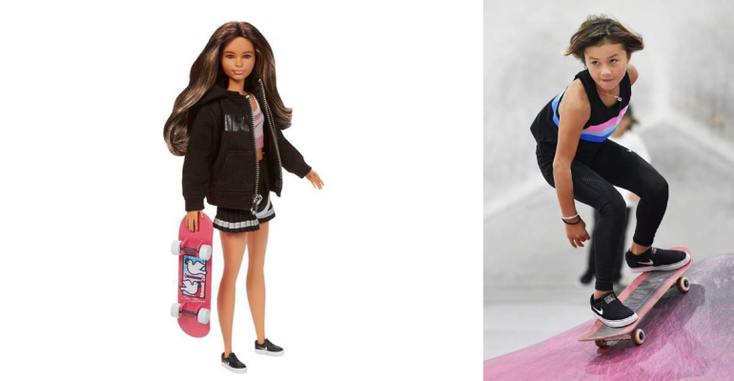 Barbie has chosen 12-year-old skateboarder Sky Brown as a Barbie Role Model by unveiling a one-of-a-kind doll created in her likeness.

The new Barbie highlights how Brown has broken boundaries for the next generation of girls. Born to a British father and a Japanese mother, Brown will be competing for Team Great Britain next year in the delayed 2020 Tokyo Olympics, making her Great Britain's youngest Summer Olympian ever, and the youngest Olympic athlete since 1936. Sky began skating and surfing at age two and quickly became a phenomenon when short videos of her gained millions of views on YouTube.

"I'm going to push boundaries for girls with my skating and surfing,” says Brown. “I'm going for gold in 2021 and nothing will stop me. Having a Barbie created in my likeness is one of the most incredible things that’s ever happened to me! I hope other girls my age can see what is possible when you follow your dreams.”

The doll is dressed in Nike activewear and holds a skateboard, ready for adventures

on and off the ramp. It was gifted to Sky as she recovers from injuries after breaking her left wrist and hand and suffering skull fractures earlier this year.

Barbie is dedicated to shining a spotlight on diverse role models who inspire the limitless potential in every girl. This year honors women breaking barriers in sports.