Engage! 'The Next Generation' Treks into 30 Years

For three decades, &#39;Star Trek: The Next Generation&#39; has amassed generations of fans. This year, CBS Consumer Products is celebrating the brand&#39;s pearl anniversary with a score of content-inspired merchandise, live events and more that are sure to guantree the series even more years of triumphs. 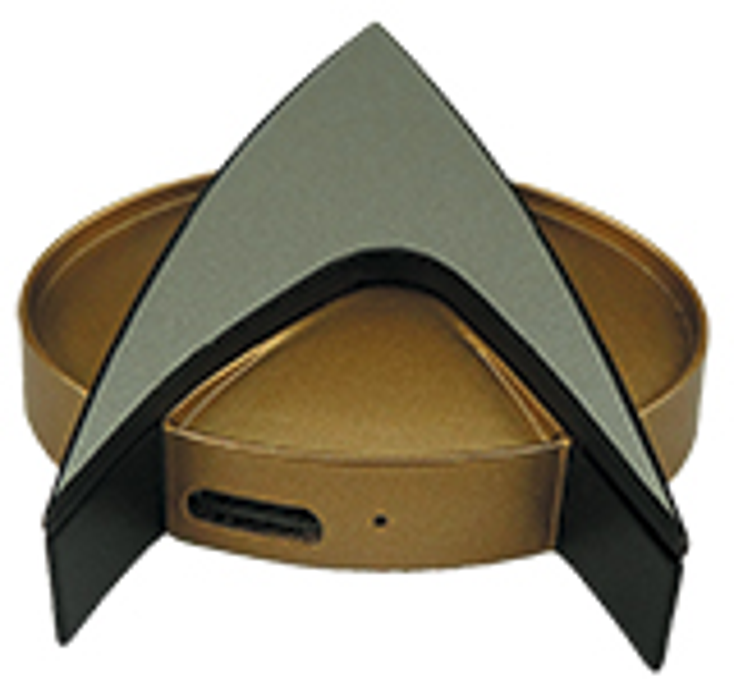 For three decades, 'Star Trek: The Next Generation' has amassed generations of fans. This year, CBS Consumer Products is celebrating the brand's pearl anniversary with a score of content-inspired merchandise, live events and more that are sure to guantree the series even more years of triumphs.

seven seasons and four movies, including

Like its predecessor, the show placed a strong emphasis on community, inclusion and diversity, and continued to serve as a ground-breaking program on multiple levels. It featured a blind man, La Forge, as an integral member of the crew, as well as Starfleet's first Klingon officer, Worf. It also continued to tackle topics such as working together, cooperative and peaceful resolution and other key themes from the "Star Trek" universe. The series was also on the cutting edge of technology with touchscreen interfaces, communicator badges and more.

Even now, 30 years on, "Star Trek: The Next Generation" has an impressive fan base with 1.5 million likes on Facebook.

"We're very focused on fan engagement as a company," says Veronica Hart, senior vice president, consumer products, CBS Consumer Products. "The brand has such a passionate fan base that they're constantly in touch with us, and we're always communicating with them, whether it's engaging with them through social media, our gaming partners or other forms of content distribution, spanning from CBS All Access to syndication."

From the beginning, consumer products have been a natural brand extension for "Star Trek: The Next Generation." A key partner for the program's very first consumer products rollout was Playmates Toys, who had more than 300 different figures in its portfolio, as well as other core toy categories. Other highlights from the height of the series' licensing program were "Star Trek: The Next Generation"-branded water and Borg-inspired bubble bath.

To fully celebrate the series' 30th anniversary, CBS Consumer Products has unveiled a robust merchandising lineup. However, unlike its licensing campaign for the 50th anniversary of "Star Trek," the campaign focuses more on content-inspired pieces for the "true" fan rather than co-branded deals that would appeal to a larger audience.

"Our focus right now is very heavily on the content of the show to a level that we had never done before. We really looked at signature characters and signature moments to develop high-quality collector programs," says Hart.

, which details the life and career of Captain Picard–ranging from court martials, unrequited love, his capture and torture by the Cardassians, his assimilation by the Borg and countless other encounters. Titan Books will release the title this month.

The company has also tapped artist Juan Ortiz to develop

Star Trek The Next Generation: The Art of Juan Ortiz

, which features every episode from the series (178 in total) showcased as it would have appeared as a movie poster in Ortiz's well-known style.

On the collectibles side, the company has teamed up with Quantum Mechanix for a fully articulated, 1:6 scale Picard figure. QMx has also developed anniversary badges and merchandise inspired by the series' mirror universe.

ThinkGeek has also signed on to release branded swimwear and a Warp Core Charger. The company will also release "Star Trek: The Next Generation" Geeki-Teekis, which are produced by Beeline Creative.

On the apparel front, CBS Consumer Products has tapped a variety of partners including BifBangPow, Trevco, Her Universe and Freeze, among others. Anovos also released replica uniforms, including a new range of the women's skant uniform, which according to the book

The Art of Star Trek

is a skirt designed for men following the total equality of the sexes presumed to exist in the 24th century.

Other partners on board to celebrate the series' 30th anniversary include FanSets Pin for 30th anniversary pins; FameTek for a Bluetooth Communicator Pin, as well as an Enterprise 1701-D Bluetooth speaker; Cherry Tree for a Borg computer; Spyr Games for a Borg invasion in its game "Pocket Starships"; IDW for "Star Trek The Next Generation: Mirror Broken" comics; Hallmark for itty bitty plush and ornaments; Gallery Books for a new publishing title; Shmaltz Brewing for craft beer; and Modiphius for the RPG game "Star Trek Adventures."

Live events have also been a popular push during the "Star Trek: The Next Generation" activities. Earlier this year, CBS Consumer Products hosted its signature event in Las Vegas, Nev., "Star Trek Las Vegas," which featured a cast reunion, exclusive merchandise and showcased the art of Ortiz.

The company will also host a number of "Star Trek: The Next Generation" actors and events on board its "Star Trek"-themed cruises in January. In 2018, CBS Consumer Products will host a variety of actor reunions and fan events to continue the celebrations at sea.

On the international front, CBS Consumer Products will host a large fan event in Dortmund, Germany, in April as well as the fan event "Destination Star Trek" in Birmingham, England, in October 2018. Many of its 30th anniversary licensed products will also be available internationally through its U.S. licensees.

While the 30th anniversary celebrations will primarily culminate as 2017 comes to a close, CBS Consumer Products is continuing to look to the future with more "Star Trek" content in the works.

On Sept. 24, the brand-new "Star Trek" series, "Star Trek: Discovery," debuted on CBS and is now available in the U.S. on CBS All Access. The new series is set roughly a decade before the events of the original "Star Trek" series, introduces all-new characters, worlds and civilizations and continues the classic storyline that has endured through the decades. Even though CBS Consumer Products is shifting gears to live and breathe the new the series, the overall "Star Trek" franchise will continue to be a focus for the company.

"We're seeing constant growth of 'The Next Generation' fan community," says Hart. "In addition, we have more 'Next Generation' merchandise than we've ever had before, other than when it was on air, but now it's much more tied to the content of the show. The 30th anniversary has been a great halo for us, but we're still focused on extending 'The Next Generation' footprint going forward."