True can now send personalized messages on the platform via technology from Aquifer. 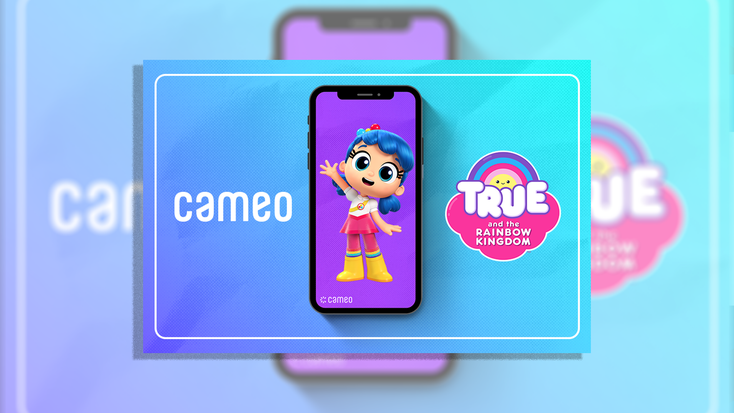 True and the Rainbow Kingdom

,” is the first 3D animated talent to join Cameo, thanks to instant 3D animation technology from Aquifer.

Parents can now request personalized, fully animated video messages from True to celebrate their child’s birthdays, the first day of school or becoming a big brother or sister. Through Cameo, True can also offer helpful year-round reminders for kids to “take a deep breath” or "sit and have a think" referencing iconic moments from the show where children are encouraged to stay present and organize their thoughts – valuable skills for children navigating complex social landscapes at home, school and online.

Working with Cameo and Aquifer, True can deliver custom messages directly to children, drawing on her kindness and compassion,

and extending the show’s core themes of empowering children to care for one another.

“We’re thrilled to be working with Cameo to bring True’s unique message of positivity and joy into the everyday lives of families,” says Daniel Rattner, vice president, marketing, Guru Studio. “Leveraging Aquifer’s cutting-edge technology, we're excited to be leading the way enabling young fans and their families to create an even deeper and more personal relationship with the characters they love.”

The launch follows a growing trend among entertainment brands exploring new and innovative ways to reach their young audiences through digital-native experiences such as AR, NFTs and the metaverse.

True’s personalized greetings are created by Aquifer’s video platform, a mobile and desktop platform that enables creators and teams, regardless of experience, to instantly create cinematic animations complete with character expressions and lip sync, studio-style camera angles and dynamic movements.

“We are thrilled to partner with Guru to premiere the first 3D animated character on Cameo,” says Chen Zhang, chief executive officer, Aquifer. “True’s greetings are so unique and special because they are more like mini, personalized episodes made for each request. We think True’s fans will be delighted.”

True and the Rainbow Kingdomguru studio