Tokidoki Steps Up to Bat with MLB 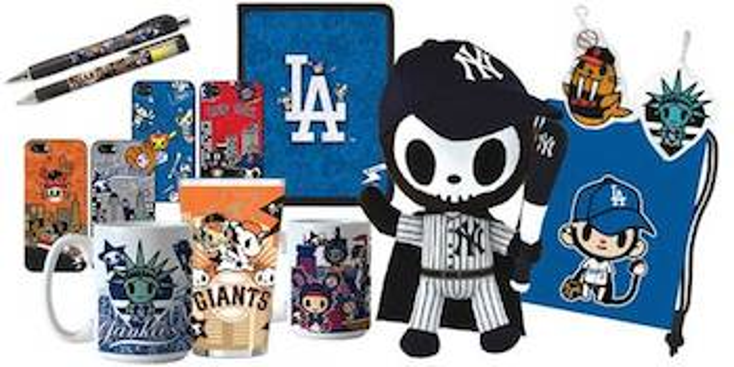 Pop culture brand Tokidoki (which means “sometimes” in Japanese) has teamed up with Major League Baseball Properties for a co-branded product line that marks the property’s first sports licensing collection.

The new line will feature Tokidoki artwork created exclusively for the collaboration on a wide range of products including headwear, apparel, bags, drinkware, plush, tech accessories, stationery and novelties.

The collection will launch with a limited product assortment this spring to coincide with the start of the 2014 MLB season, and will be followed by full rollout later this year. At launch the range will feature imagery from the Boston Red Sox, Los Angeles Dodgers, New York Yankees, San Francisco Giants. The Seattle Mariners, Detroit Tigers, Texas Rangers, San Diego Padres, Chicago Cubs, Chicago

White Sox, New York Mets and Philadelphia Phillies will be added throughout the season, with plans to introduce more teams in the 2015 season already in place.

“We are thrilled to combine the excitement of baseball with the imaginative designs of Tokidoki, to mark their first ever professional sports themed line of products,” says Howard Smith, senior vice president, licensing, MLBP. “Tokidoki’s style and artistic flair is unique and unparalleled, and by bringing together top MLB licensees across various merchandise and accessory categories, we are able to launch a true collaboration to bring very special offerings to our fans.”