The NFL Players Association is joining forces with the Fire Department of New York for a limited edition t-shirt collection to celebrate FDNY&#39;s 150-year legacy. 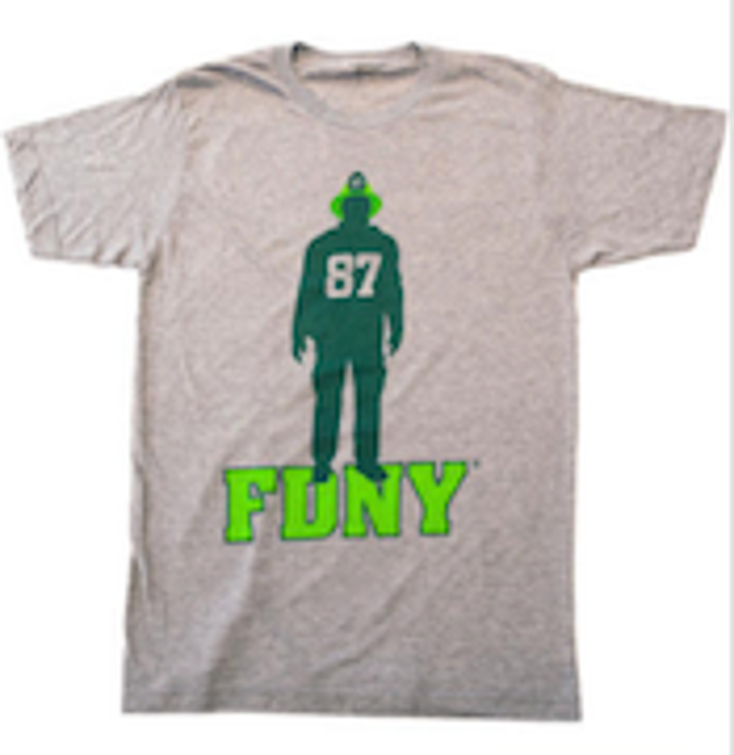 The sports heroes of the NFL Players Association are joining forces with the public service heroes of the Fire Department of New York for a limited edition t-shirt collection to celebrate FDNY's 150-year legacy.

Some of the most popular New York team players will be featured in the designs including New York Giants wide receiver Odell Beckham Jr. (No. 13), New York Jets wide receiver Eric Decker (No. 87), Giants quarterback Eli Manning (No. 10) and Jets cornerback Darrelle Revis (No. 24).

Each t-shirt features official FDNY marks alongside the names and numbers of the selected players, and are available for a limited time at 25 Modell’s locations in New York and New Jersey, as well as online. The 150th anniversary of FDNY coincides with the first regular season meeting between the Giants and Jets in four years, which will be held at MetLife Stadium on Dec. 6. A pre-season game between the two teams will also take place Saturday. A portion of the proceeds from the sale of the t-shirts will benefit the FDNY Foundation, which supports public education and training programs.

FDNY is excited to partner with New York’s football stars and the NFL Players Association to continue the yearlong celebration of the department’s 150th anniversary,” says Daniel A. Nigro, fire commissioner, FDNY. “This great partnership highlights the brave work of our members and will raise important funds for the FDNY Foundation, helping the FDNY to better protect New York.”

The collaboration was brokered by NFLPA's licensing and marketing subsidiary NFL Players Inc. and designed and created by 500 Level, an official NFLPA licensee. 500 Level secured the FDNY license exclusively for the co-branded collection.

“The NFLPA always seeks to expand the reach of traditional licensing and marketing opportunities to include charitable partnerships, and is proud to be working together with the FDNY,” says Steve Scebelo, vice president of licensing and business development, NFL Players. “Connecting two recognizable community figures–NFL players and firefighters–is an excellent way to celebrate the work ethic of New York in a unique fashion. 500 Level‘s designs capture the spirit of FDNY and NFL players in a fashion that should resonate strongly with fans.”

“It’s an honor to team up with New York’s bravest and celebrate 150 years of incredible service and sacrifice,” says Revis. “These unique t-shirts make it possible for all of us to give back directly to the FDNY and show our support for their various programs.”