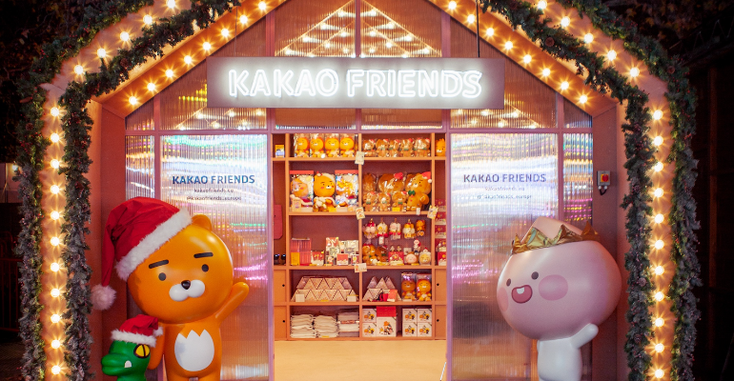 The store will be located within Hyde Park Winter Wonderland’s Santa Land for six weeks, highlighting a range of 80 products from the new winter collection, as well as exclusive Christmas products. These include toys, plush, body pillows, gloves, earmuffs, socks and slippers as well as diverse lifestyle products such as humidifiers and mood lights.

The pop-up was announced just after Kakao chose IMG as its agency in Europe. The exclusive deal was announced in September. The initial focus for Kakao Friends in Europe was apparel and accessories, fashion accessories and homewares.

Kakao Friends includes eight characters derived from a series of emoticons on the “Kakao Talk” platform, a Korean messenger platform with more than 200 million users. Characters

Apeach, Ryan, Muzi, Con, Tube, Neo, Frodo and Jay-G have already been featured in various collaborations in the past.

At the store, Kakao Friends character Ryan is dressed as Santa on the porch to welcome Londoners and tourists into the Alpine hut-styled pop-up store. The store will be lit with turbo lights all around.

The Kakao Friends pop-up is the latest addition to Hyde Park Winter Wonderland and aims to provide holiday gifts to Kakao fans in the U.K.