Google, Apple, Microsoft & Facebook remain on top, with Amazon joining the list of the most valuable brands in the world. 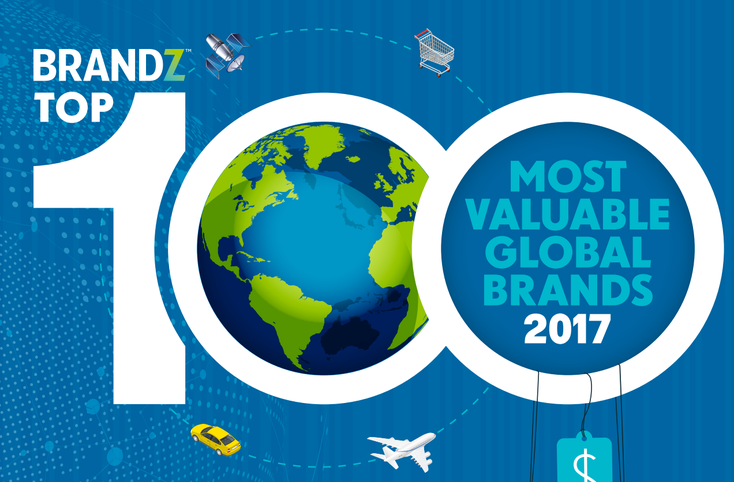 Google, Apple, Microsoft & Facebook remain on top, with Amazon joining the list of the most valuable brands in the world.

GLOBAL–Google remains the world’s No. 1 brand, according to the 2017 BrandZ Top 100 Most Valuable Global Brands report from WPP and Kantar Millward Brown.

To develop its report, WPP gathers information from more than 3 million consumers about their attitudes toward and relationships with 120,000 brands across 51 countries.

This year’s Top 5 remain largely unchanged, with one notable exception–Amazon, which this year is ranked No. 4 following a 41 percent increase in brand value. Google, Apple and Microsoft remain in the Top 3, in that order, with Facebook also holding on to its No. 5 position. Combined, the total value of these Top 5 brands makes up 25 percent of the total value of the Top 100 list.

Despite a turbulent year geopolitically, brands in general have continued to grow, with the Top 100 brands increasing in value by 8 percent year-on-year to a total worth of $3.64 trillion.

“These results illustrate that, although market volatility is inevitable, the impact on brands is not,” says

Technology is clearly a theme, with 37 of the 100 most valuable brands in the world falling into that category, comprising 54 percent of the total Top 100 value. And the seven newcomers to the list this year are also technology related: YouTube, HPE, Salesforce, Netflix, Snapchat, and telecom providers Xfinity and Sprint.

Adidas is the fastest riser on the list, with a 58 percent increase in brand value on the heels of the current retro fashion trend and operational and marketing changes within the company.

The U.S. remains the leader among countries represented on the list, with 54 of the Top 100 brands, making up 71 percent of the total value. But China is clearly a rising star, boasting 13 brands in the Top 100, up from one brand 12 years ago when the report was first launched. In fact, Chinese brands have risen 937 percent in value over those 12 years, and now comprise 11 percent of Top 100 value.

Chinese brands aren’t the only indicator of the massive shifts in the world since the BrandZ Top 100 launched in 2006. Only three brands that appeared in the Top 10 in 2006–Google, Microsoft and IBM–remain there, with brands such as GE, Coca-Cola, Marlboro, Walmart, Citi and Toyota seeing significant drops in value in the intervening 12 years, for various reasons, including consumer health concerns and the 2008 financial crisis.

While Coca-Cola has dropped out of the Top 10 brands, it leads in brand contribution, a BrandZ metric for the strength of a brand alone without any other factors, alongside Colombian beer brand Aguila.

The presence of the Chinese internet portal Tencent in the Top 10 (ranked at No. 8), and the disappearance of state-owned China Mobile (No. 4 back in 2006, now No. 17), also indicates the power of technology, along with China’s evolution to a more competition-driven economy.

The presence of Amazon (No. 4), and the disappearance of Walmart (No. 6 in 2006, now No. 31), reflect the massive disruption of the retail category by e-commerce.

Interestingly, among the categories measured in the report, retail saw the largest increase in value growth (up 14 percent), driven by e-commerce including Amazon (up 41 percent) and Alibaba (up 20 percent).