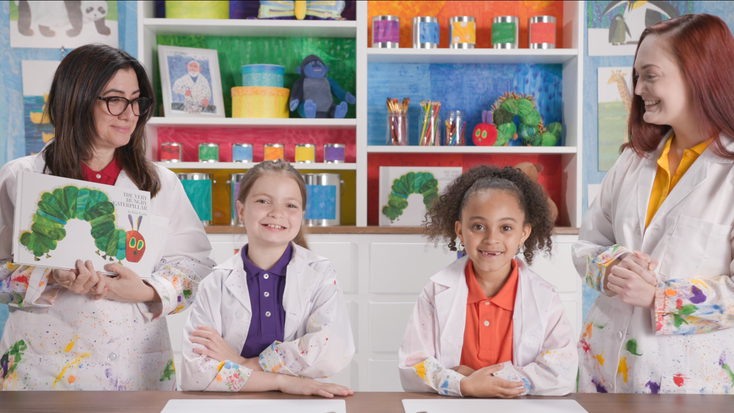 , a new children’s variety show featuring puppetry, read-alouds, crafting tutorials and animation centered around the author’s characters. The channel will premiere the first 15-minute episode on Nov. 17, with new episodes releasing every two weeks over the next year.

“As Eric Carle’s longtime publishers, Penguin Young Readers is proud to launch this fun and accessible new platform for children and families to engage with the world of Eric Carle,” says Jen Loja, president, Penguin Young Readers. “Through storytelling, interactive art projects, puppetry and animation, Eric Carle’s beloved and timeless characters and creativity can now be experienced in new and exciting ways by a whole new generation.”

Caterpillar Show,” a read-aloud from a special guest and a crafting tutorial based on each episode’s theme – along with interstitial animated segments from

“This has been a wonderful opportunity to combine all the things that Eric Carle loved – making art, reading and bringing his marvelous characters and creations to life in the form of puppets,” says Jonathan Rockefeller, producer, Rockefeller Productions. “It’s been fantastic to collaborate in this way with all our other long-standing partners on this venture; including Storytoys and Penguin Young Readers.”

In the future, the World of Eric Carle YouTube Channel will expand to include livestreams, art contests, musical content and more.

Related:Going Behind the Deal: Ella’s Kitchen Enters into First Licensing Partnership with ‘The Very Hungry Caterpillar’ Collab, The World of Eric Carle Partners with Balabala