The English-language novel will be published this September. 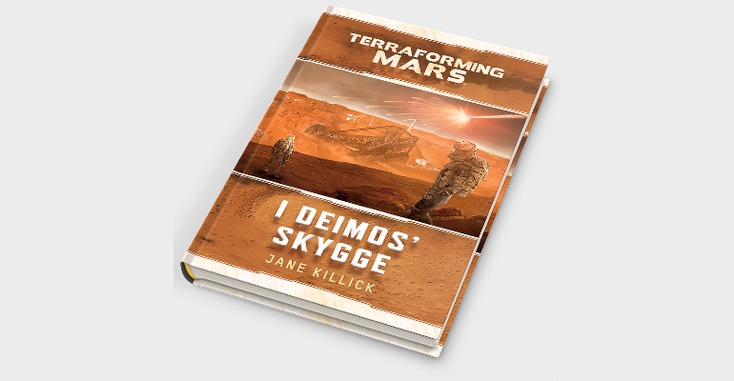 Character and Asmodee Entertainment have announced that work is underway on a Danish translation of the first Terraforming Mars novel, “In the Shadow of Deimos,” with publication set for later this fall.

“I am delighted that we can announce our partnership on this novel today,” says Alexander Thieme, licensing manager for the project, Asmodee Entertainment. “Character are experts in their field and with the popularity of the Danish-language edition of ‘Terraforming Mars’ in Denmark I’m confident that many fans of the game will be equally delighted to read the novel in their mother tongue.”

The English-language novel will be published this September by Aconyte Books, the fiction imprint of the game’s distributor, Asmodee.

“The Terraforming Mars board game is incredibly popular, with a great base game and excellent expansions added after its original release,” says Morten Skovgaard, co-owner and localization manager, Character Localization and Publishing. “The Swedish Fryx brothers managed to

create something special with this game: It quickly turned into a cultural phenomenon rather than ‘just’ a game, as it is both highly topical in terms of climate concerns, scientific progress, technological advancement and the exploration of space and very accessible to inexperienced board game players despite its depth and variety. The game has drawn in a vast number of new players, and it is only natural that the Terraforming Mars universe is now being expanded into the book format, as there are many stories left to be told in it. ‘In the Shadow of Deimos’ feels like a natural new expansion of the game in book format, and we are very excited to bring this new Terraforming Mars experience to all the people who enjoy the Danish version of the board game.”

“We are very happy with adding books to the Terraforming Mars brand,” says Jacob Fryxelius, co-owner, FryxGames, creator, Terraforming Mars. “Especially when they bring the stories behind the game to life, as ‘In the Shadow of Deimos’ does: a riveting story, inspiring settings and a believable future.”