Unisex apparel and accessories are part of The Selfridges Garden Centre. 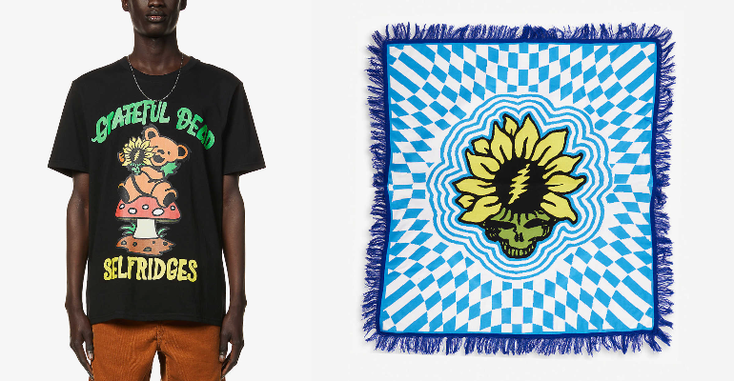 Taking inspiration from the band's tenth studio album, "Shakedown Street" and the recent rise in the popularity of gardening among consumers, the Shakedown Garden collection gives the classic Grateful Dead aesthetic of tie-dye, skulls, bears and roses a botanical spin.

The unisex collection features T-shirts, hoodies, sweats, a knitted blanket, cap, mug and an eco-water bottle, plus a flowerpot and gardening gloves.

"The Grateful Dead played England more than 20 times, with 20 shows in London alone, along with a few other shows around the U.K. throughout their performing career,"

says David Lemieux, archivist and legacy manager, Grateful Dead. "Their first show outside of North America, more than 50 years ago in May 1970, was in Newcastle-Under-Lyme, and over the next 20 years, they played some of their best live performances in England, including bonafide classics in 1972 and 1974. It's a thrill to have the Grateful Dead with such a prominent presence in Selfridges. A retail institution with more than 100 years of history is the perfect fit for the Grateful Dead, with their more than 55 years of cultural and musical history, and we're all thrilled to be bringing the Shakedown Garden collection to Selfridges."

To celebrate the launch of Shakedown Garden, a special episode of "The Good Ol' Grateful Dead Podcast" is dedicated to the band's history in the U.K., with guests including noted U.K. Deadhead Alex Allen and

to listen to the episode "Over There: The Dead in England."