Marvel has entered a series of deals for merchandise inspired by its new animated film Spider-Man: Into The Spider-Verse. 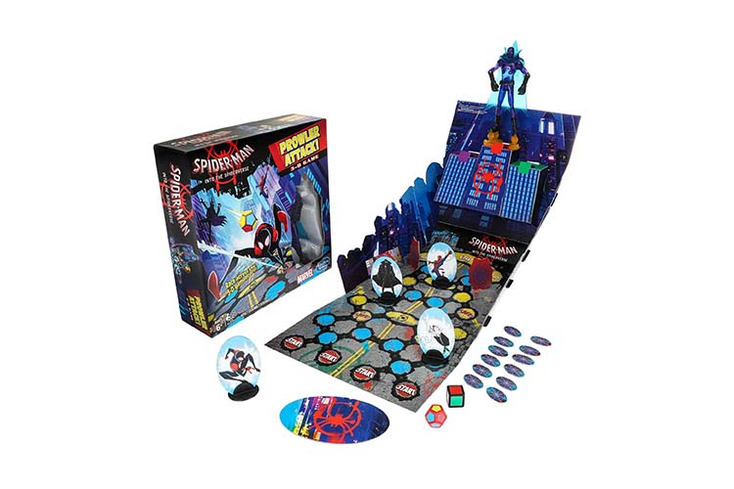 Funko is on board for a line of Pop! general release and exclusive renditions of Peter, Miles, Gwen, Noir, Green Goblin and The Prowler.

An additional Miles in his first attempt at costume makeup, hatless Noir and Spider-Ham are available exclusively at Walgreens. Hasbro has signed for a line of Spider-Man: Into the Spider-Verse toys, including a new action figure series that consists of a six-inch Spider-Gwen, Miles, Peter and Prowler. A Miles figure is available as a foot-tall Titan Hero and a Shock Strike rendition. A Miles Morales and Gwen Stacy 2-pack is available exclusively at Target.

A 16-month 2019 calendar is now available that features images of Miles, Gwen, Peter, Noir and Spider-Ham. Hot Topic has released a range of t-shirts that feature the Miles Morales logo, among others.

Spider-Man: Into The Spider-Verse: The Art Of The Movie

hardcover book offers a look at the making of the film. The film’s original soundtrack is available now at Target and includes tracks

such as, "What's Up Danger," "Familia" and "Scared of the Dark.” Hasbro's Prowler Attack 3-D Game, a Walmart exclusive, invites players to play as Miles, Gwen, Peter or Noir to capture Prowler.

Finally, Nike’s Jordan Brand has paired for the Air Jordan 1 Retro High OG Origin Story, the shoes seen on Miles in the film.

Spider-Man: Into the Spider-Verse

is now playing in theaters!