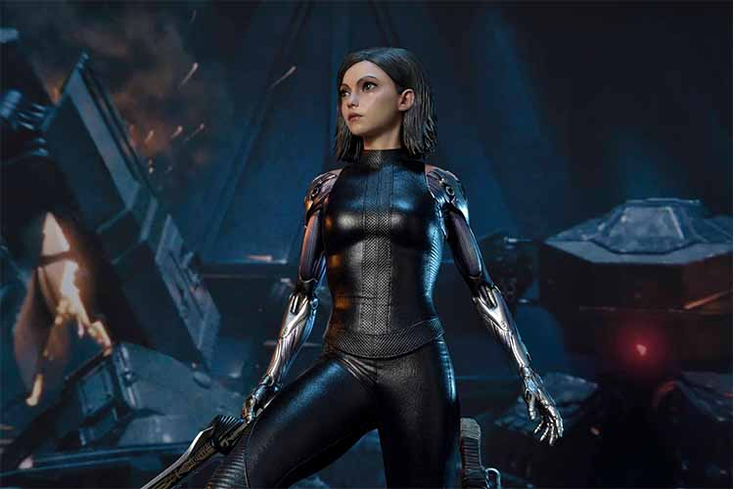 A line of Alita Mini Epics vinyl figures from Weta Workshop includes Alita, Dr. Ido, Zapan and more. The line is available now for pre-order. A 1:1 scale cosplay prop that is a replica of the Damascus Blade wielded on the screen will also be available.

At San Diego Comic-Con, Loot Crate rewarded fans with an Alita meet and greet, as well as screenings with the film’s creators. Ahead of the film’s release, Loot Crate will honor the film across its subscription boxes with items such as an exclusive Alita Motorball figure (Loot Anime / January), an Alita Berserker figure (Loot Anime / February), an Alita Doll Body enamel pin (Loot Crate / February), a Black & White Alita Motorball

variant figure (Loot Crate DX / February) and Alita leggings (Loot Wear / February). Loot Crate will also announce the details for its Alita Fan Art contest, which will offer fans the chance to be showcased in a spring Loot Anime Box.

Publishing partner Titan is set to roll out a line of

books including a novelization, prequel story, making-of book and an in-world character journal. The prequel has been dubbed,

and is available now. The in-world journal is named

and will become available Feb. 19 alongside the official movie novelization.

All items will become available this year. Finally, Hot Toys will launch a detailed Sixth Scale Figure of Alita in her Berserker Body. Key details include interchangeable hands, a Damascus blade style weapon, stand and more.

A release date has yet to be announced. Prime 1 Studio has made an Alita Berserker Quarter Scale Statue available for pre-order.

A prototype was revealed at San Diego Comic-Con, with a regular and deluxe edition set to roll out in the next few weeks. The deluxe version is packaged with interchangeable arms and changeable expressions. Each figure has a 25” base and LED light-up features.

is set to debut in theaters around the globe on Feb. 5 and will premiere in the U.S. on Feb. 14.