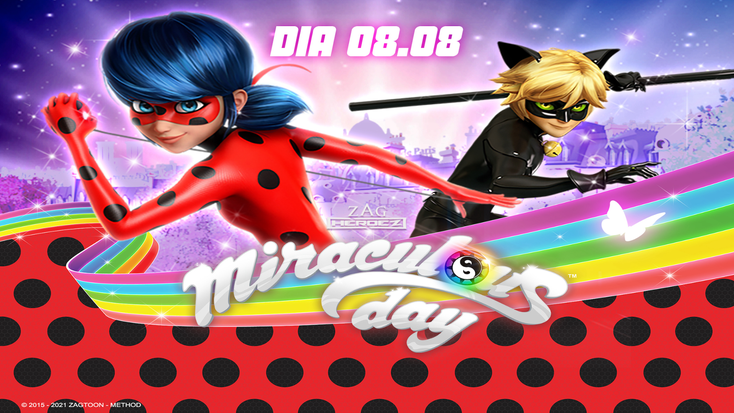 is celebrating its flagship brand, “

” across Latin America with a pan-regional “Miraculous Day” promotion on Aug. 8.  The announcement was made today by Julian Zag, executive vice president, global operations and consumer products head, ZAG.

“On Aug, 8, we will celebrate ‘Miraculous’ fandom throughout Latin America with a multi-pronged promotion that extends from the screen to online and in-stores,” says Angela Cortez, vice president, consumer products, ZAG. “We are excited by the enthusiastic response from our content and retail partners to make Miraculous Day 2022 a fun and memorable event for our millions of fans across the region and to raise more awareness for our unique brand.”

The first official “Miraculous Day” was celebrated in Brazil by ZAG and Brazilian broadcast partner Gloob in 2019.  The success of this initiative has led to the creation of an expanded promotion throughout the region that will feature

special on-air content, multiple influencer and social media campaigns and retail promotions at more than 700 outlets to include Miraculous character meet and greets at shopping malls and amusement parks throughout Brazil, Argentina, Chile, Peru, Mexico, Colombia and Central America.  In addition to the Aug. 8 official “Miraculous Day” celebration, the promotion will further expand in key territories, including back-to-school in Mexico; Kid’s Day in South America; and a month-long “Miraculous” promotion in Brazil and Central America.

“We are very happy to see a ZAG and Gloob initiative expanding to all of Latin America,” says Luiz Filipe Figueira, head, programming and content strategy, Gloob/Gloobinho. “This only reinforces Globo's commitment to the success of ‘Miraculous.’ We hope that ‘Miraculous Day’ will become a global initiative for everyone to celebrate the pride of being a Miraculer.”

In Brazil, as part of the fourth annual “Miraculous Day” Celebration, Gloob will air a marathon that will feature brand new content. 2022 also marks the first year that the event will expand into retail, with more than 100 retailers in Brazil on board to participate, including Rihappy, who will offer character meet and greets in Sao Paulo, Superlegal and Blanc Toys. “Miraculous Day” will be highlighted in-stores with distinctive point-of-purchase material on endcaps and in windows. May Macarons is also developing ‘Miraculous-’ themed macaroon’s available at their retail locations in Sao Paulo, featuring special indoor events and online promotions. This year’s celebration will also incorporate an e-commerce initiative from Aug, 1–15 with online retail stores, including Amazon, Superlegal, Blanc Tous, Trends Brinquedoes and Estripulia.

In Mexico, public broadcaster Televisa Univisión will debut the animated movie, “Miraculous World: New York – United Heroez,” following a week-long Miraculous on-air promotion on Channel 5.  The Kataplum amusement park will offer character ‘eet and greets on three weekends and will screen a promotional video featuring the Miraculous Day image as well as photos of licensed merchandise across its 673 screens in the Kataplum parks as well as 51 Recorcholis entertainment centers nationwide. Kataplum will also run a month-long bus advertising campaign throughout Mexico City during August.  ZAG is also supporting back to school sales with Fotorama featuring point-of-sale materials and a social network campaign. In addition, the “Miraculous” Amazon branded store will have an extensive advertising campaign promoting “Miraculous” licensed products.

Related:Zag Signs More Than 30 Partners in Mexico for ‘Miraculous'

In Colombia, local broadcaster RCN will integrate the “Miraculous Day” promotion with special programming; and ZAG, together with toy distributor Continente, will run a special promotion in retail locations.

In several countries across Central America, “Miraculous Day” will be celebrated in partnership with retail apparel partner St. Jacks, who will offer “Miraculous” character meet and greets and a costume contest throughout their stores. Continente will also replicate the Colombia promotion in this region.

In Chile and Peru, toy distributor Wish Trade will promote character meet and greets and sweepstake contests with retailers such as Ripley and Falabella in Chile, and Ripley, Falabella, Tottus, Wong and Oechsle in Peru.