Hang Ten: Riding the Wave of an Endless Summer 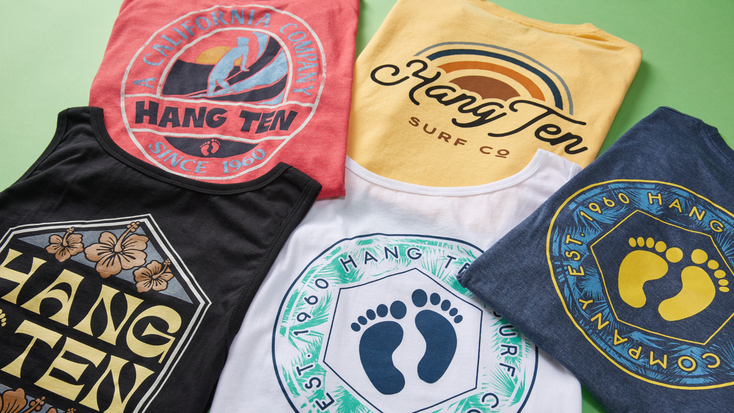 Two bare feet and ten toes. For many, particularly fans of beaches, surfing and all things California, it’s the immediately recognizable logo for the original surf and California lifestyle brand,

. Marc Setton, chief executive officer, Hang Ten North America, hasn’t been with the company since the beginning, but he’s well-acquainted with its storied history.

“Hang Ten is the original action sport brand,” Setton says. “It was created in 1960 by Duke Boyd, who started surfing when he was 12 years old. Boyd went to a seamstress, Doris Moore, and asked her to create some grommets in a board short. Before, surfers would come out of the water and they would have trunks that were filled with water. Adding grommets in right locations fixed that. They created the first board short and they created the first-ever surfboard store.”

The company name is even in UrbanDictionary.com. The term, “hang ten,” originated from the surfing culture, referring to the act of hanging all ten toes off the front

of a surfboard while riding a wave.

“Anybody who surfs around the world knows the name, Hang Ten,” says Setton. “Other people sometimes don’t recognize the brand unless they grew up with it; but once they get into it and once they read about it, they get sucked in right away by the history of Hang Ten.”

Boyd and Moore sold the company in the 1970s, but the name and the brand, Hang Ten, has continued to thrive around the world. Setton came to the brand much later, back in the early 2000s.

The origin story of Setton’s involvement with Hang Ten started out as a genuine inquiry from the licensing veteran.

“Sometime around 2005 or 2006, a designer of ours was wearing a terry polo shirt with that famous ‘two feet’ logo,” says Setton. “I turned around and I looked at my son and said, ‘What happened to that brand?’ And sure enough, we tracked down the owners and we ended up buying it in 2008. We own the North American rights in the U.S. and Canada. It’s a global brand. There are about 800 stores around the world, mostly in Asia, and there are 80 stores in Mexico. So, there are two other owners in the brand, the one that is in Mexico and the ones who own the retail outlets around the world. Although it hasn’t remained in the spotlight all those years, the brand never went away. And it has grown substantially since 1960 when it was founded. Setton acknowledges that having a “nostalgia” brand is a big plus, especially now, when it seems like everything old is new again.

“We were at the right place at the right time,” he says. “Had it not been for that designer coming in with a loop terry polo shirt, we probably wouldn’t have bought it. But ironically, that same polo is back in fashion and terry, it’s a big fashion statement out there now. So, we’re thrilled to have had the brand now for 14, 15 years. When we acquired the brand, we acquired all the archives since 1960. So, we have all the original stripes and styles, and it’s one of the most authentic, original action sport, California lifestyle sports brands.”

Fashion is obviously a strong category. Another area Setton would like to see the brand branch into is home goods.

“If you look at brands like Tommy Bahama and Margaritaville, they’ve done that,” he says. “They’re even in hotels. But I think health and beauty and home are areas that definitely resonate with our brand.”

Setton says the company is particularly interested in finding licensing partners who can relate to the brand’s lifestyle.

“We love the California lifestyle, the people who live that lifestyle, who live out there and love the surf,” he says. “Our most successful licensees are out of the West Coast or are the ones that resonate in that way, like with Australian beaches or California style. So, we look for those type of partners rather than somebody from New York City who may not understand the consumer base.”

The company has had several collaborations, but one that Setton is especially proud of was a capsule with Urban Outfitters prior to the pandemic, which even included giving away surfboards.

“It was a really fun collaboration – a capsule from the ’60s. The social media garnered 300,000 likes the first day. It was a vintage collection of products and it did very well,” says Setton.

Taking California Across the Atlantic

Setton says it’s that sort of successful collaboration, and a goal of securing lucrative global partnerships, that has the company attending Brand Licensing Europe (BLE) for the first time. “One of the reasons we’re going to BLE is that we’ve had friends who have been able to get great collaborations,” adds Setton. “We’re hoping to meet global retailers that we could do a similar capsule as we did with Urban Outfitters. Hang Ten is in over 25 countries around the world, but that’s mostly through the stores. We operate on a licensing model here in North America and we’d love to see a global collaboration because with that many stores and that much of a global footprint, pretty much everybody around the world knows the brand. We’re interested in meeting the European market and we’re looking to expand into Europe.”

As exhibitors at Licensing Expo for several years, exhibiting at BLE seems like a logical next step for Setton and the brand.

“We do a fun booth. We have a vintage VW bus in our booth and we create a beach scene out of it and people love it,” says Setton. “This year, we’re doing the same in BLE. We’re created a fun booth and we’re bringing in a vintage VW bus with surfboards and it will attract the eye. We look forward to coming to these shows because we get to see everybody in just a few days.”

Capitalizing on a Theme

Another thing Setton is particularly excited about is the theme of this year’s BLE: Fashion. “When you talk about authenticity, our brand carries that very well,” says Setton. “We’re well-known as the striped T-shirt people. People have shoeboxes full of Hang Ten products from 40 or 50 years ago, and they keep them in their closets.”

There’s a nostalgic factor for a brand that’s been around for more than 50 years. Setton says people often offer the company these vintage products, whether it’s apparel, books or magazines.

“We were approached by retailers out of the U.K. a couple years ago, before COVID,” says Setton. “We’re hoping to see retailers and wholesalers who are open-minded for licensing and collaborations. We already ship to almost a dozen different countries around the world from Australia to the U.K. to France. But we think by coming out there and showing our booth and our product lines and our look, we’ll just expand our global footprint. Having 800 stores around the world and being in over two dozen countries, it’s a well-recognized brand around the world. And we’re just getting started.”