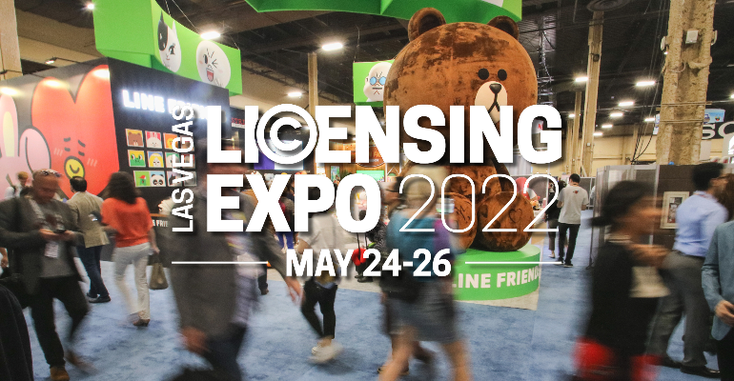 ) is gearing up to host the consumer product industry's most memorable and productive in-person get together in three years, with a growing roster of brands signing on daily to exhibit at the in-person event to be held at the Mandalay Bay Convention Center in Las Vegas, NV, May 24-26, 2022.

Produced in partnership with industry trade association Licensing International, the not-to-be-missed event continues to lock in cross-category brands from around the world, from sports to gaming, entertainment, corporate brands and artists, with 17 countries represented to-date. With 40 new companies confirmed in the past 4 weeks alone, the event now comprises more than 170 exhibitors signed on to date, indicating the appetite and confidence for the event’s return this May.

The exhibitor list is now available online and is accessible here.

"Licensing Expo returns in-person for the first time since 2019, and excitement among the industry is palpable,” says Anna Knight,

senior vice president, licensing, Informa Markets. "This is a business-critical time in the calendar for brands, manufacturers and retailers alike – they're coming with a pen in hand ready to ink new deals and discover the new trends that will line their shelves in the coming years, but also to reconnect in-person possibly for the first time since the pandemic. The licensing industry is built on relationships, and we’re delighted to be able to provide a safe and comfortable environment for people to reconnect, strengthen existing partnerships, celebrate successes and do business at scale face-to-face for the first time in three years. We’re also extremely excited to showcase Location-Based Experiences as the event’s theme, creating even more opportunities for brands to engage and inspire attendees in new ways."

"Society is adapting to and people are becoming increasingly comfortable with our 'new normal,' and as such, we're seeing consumers spending again and investing in brands and characters they built an emotional connection to while in lockdown," says Cynthia Modders, president, Firefly Brand Management. "Licensing Expo could not come at a better time for us, helping our clients tap into consumer trends born from the pandemic and get their exciting new products on shelves and e-commerce platforms."

"At Falcon’s, we are experts at creating worlds where your imagination can fly free,” says Cecil D. Magpuri, chief executive officer, Falcon’s Creative Group. “We are giving intellectual property owners the freedom to expand their brands into the realms of immersive destinations, entertainment content and consumer products. Falcon's will transport audiences into imagined worlds using our patented technology and storytelling prowess. We have already helped many of the world’s most iconic brands connect with their audience to build fandom at a whole new level. We cannot wait to showcase our experiential entertainment innovations and new themed destinations in development that will enable brands to take the connection with their desired audiences to new heights well `beyond’ what they could ever imagine.”

"Excitingly, we're seeing a robust selection of brands represented from across the globe, including Europe, the U.K., Japan, South America and the U.S,” says Knight. “We're taking every measure possible to ensure non-domestic exhibitors and attendees are fully equipped with the latest health and safety measures in place, in addition to providing logistical information that will simplify international travel to Las Vegas.”

Attendance to Licensing Expo is free and tickets can be secured here.