Despite a challenging year, there’s no stopping the power of play as London Toy Fair returns and brings the U.K. toy industry with it. We look at just a few of the trends from the show floor. 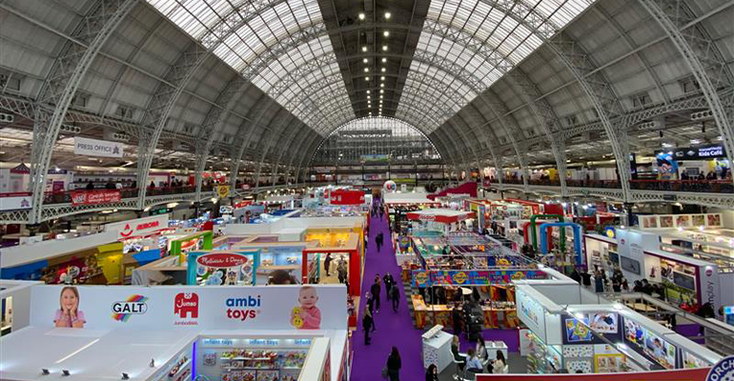 London Toy Fair
Toy sales in the U.K. declined by 3% in 2021, generating a total retail sales value of £3.2 billion (source: British Toy and Hobby Association / NPD). However, even with supply challenges and pandemic measures, the market has maintained resilience, closing the year up 2% on pre-pandemic sales (2019).

In a year that saw ongoing restrictions and shifts in consumer behavior, toy categories including plush and vehicles still grew year-over-year (9% and 7% respectively), while brands such as Barbie, Star Wars, Paw Patrol, Pokémon, Bluey and Minecraft dominated the most-sold toys list.

“The toy industry faced huge challenges in 2021 including, but not limited to, supply chain concerns and the ongoing COVID-19 pandemic,” says Roland Earl, director-general, BTHA. “Despite these hurdles, the U.K. toy market has held relatively firm compared to pre-pandemic figures, and there are signs of being optimistic about the year ahead with some categories showing growth and a strong lineup of new releases

“Last year, the U.K. toy market managed to retain 35% of the value it gained in 2020, with seven out of eleven categories up compared to 2019 figures,” says Melissa Symonds, executive director, toys, U.K., The NPD Group. “Even more impressive is that licensed toys grew for the third consecutive year, reaching 28% of the market – the highest-ever share. With a raft of toyetic film releases due this year, as well as the continued strong performance of streaming, YouTube and video game licenses, 2022 looks set to be a good year for toys.”

The return of London Toy Fair seemingly confirmed Symonds’ notion of a mass increase in licensing appeal thanks to the continued arrival of toyetic properties in mainstream media.

The IP seen most across the latest toys and innovations included “Hey Duggee,” “Bluey,” “Star Wars” and “Paw Patrol,” as well as video game favorites, “Among Us” and “Fall Guys: Ultimate Knockout.”

However, it’s not just the products on display that hinted at current trends this week, but the play patterns they cater to.

Learning through play, aspirational toys and role-play was an increasingly important presence, with Dyson and Henry Hoover licensed toys, ridable Land Rovers, CAT construction machines and tool kits as well as wooden kitchens and home accessories to name a few.

STEM learning – which has grown by 122% year-over-year according to The Insights Family – was also a significant part of the products on display at the show this week; offering scientific exploration in new games or nature packs, technological understanding with code-your-own products, build-your-own sustainable engineering kits and early learning mathematics with brands like “Numberblocks.” According to The Insights Family report, the predominant percentage of growth in STEM was seen in the young girl market, so the London Toy Fair had a wide and diverse range of products to pick and choose from for their own Hero Toys selection.

“Despite challenges in 2021, this year’s list of Toy Fair’s Hero Toys represents the creativity and continued commitment to innovation by the toy industry to enhance children’s play experiences,” says Rebecca Deeming, public relations, events manager, BTHA. “The competition for selection has been strong, and the list is filled with the potential biggest sellers for 2022. While many themes are represented across the 23, educational toys are clearly becoming more popular with consumers, reflected in the higher demand for STEM toys. I’d expect more toy companies to respond to this demand in 2022.”