And the nominees for Best Product: Appliances – Electronics – Housewares are… 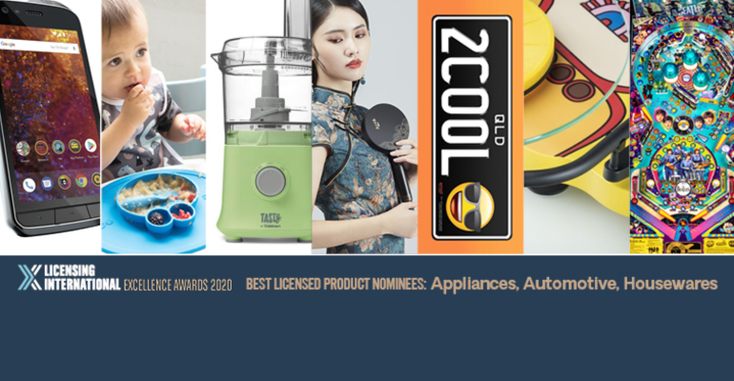 The 2020 Licensing International Excellence Awards nominees include companies from five countries on three continents. Licenses from the world of entertainment, lifestyle brands, museum collections and corporate trademarks are all included on the list. Overall, more than 600 entries were received this year from companies in 22 countries and were judged by a panel of 152 executives from 20 nations.

The following are the nominees for Best Product: Appliances – Electronics – Housewares.

For more than 90 years, Caterpillar has been helping their customers. The Cat S61 rugged phone matches up with the reputation of Cat tractors and equipment and has been recognized for innovations with laser measuring, a thermal camera and an air sensor. Cat rugged smartphones are sold in more than 60 countries and placed in more than 15,000 retail outlets.

inductive cooktop) to Cuisinart technology. Available at HSN, Amazon and Walmart.com, these candy-colored kitchen tools have aimed to inspire an entire new generation of home chefs.

Sesame Workshop collaborated with ezpz, to make of an original all-in-one placemat with the “Sesame Street” brand. The all-in-one design allows parents to serve kids their favorite foods in the shape of Elmo and Cookie Monster faces with separate compartments for different flavors.

AYIHE Fairyland Collection Kitchen and Bathroom products are the first IP crossover collection which collaborate between Haier COSMOPlat and Xiamen diiib Technology Co. With the help of Haier’s marketing and distribution channel, Diiib YIHE Fairyland collectionhas been sold in online stores such as TMALL, JD, MI and offline channels all round of China.

Personalized Plates Queensland (PPQ) unveiled the world’s first emoji number plate range in last year. Queensland drivers can now choose customized plates using five of the most popular emojis to express themselves. Priced at $475 each, more than 1,000 plates have sold to date, generating more than half a million in sales.

Project Audio Systems released their fifth Beatles turntable this year, The Yellow Submarine turntable, which is the most distinctive of the five yet. They’ve also created The Beatles White Album Turntable in celebration of the 50th anniversary of the iconic “White Album.” The turntable is held almost entirely in white.

Stern Pinball, in collaboration with Ka-Pow Pinball, released the first and only Beatles pinball machine ever made.  Only 1,964 units were produced in recognition of the year in which the band made their U.S. debut on the Ed Sullivan Show. The Pinball game is available in three models named for the recording industry’s sales award levels. The Diamond Edition, the highest level and most difficult to attain, is limited to only 100 units. The Platinum Edition is limited to 250 units and The Gold Edition is limited to 1,614 units.

registering for the event.