The nominees for Best Brand: Entertainment/Character/Toy -Animated are… 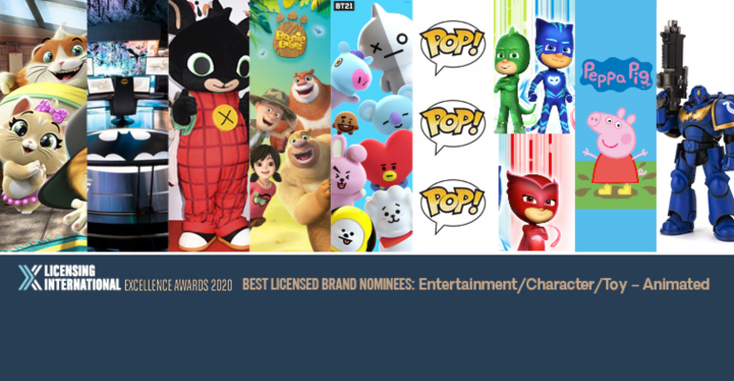 More than 600 entries were received this year from companies in 22 countries and were judged by a panel of 152 executives. Entries this year came from all over the globe including a pair from Asia and four from the U.K. and Europe. They also include a pair of toy/game-based properties alongside those from more traditional media sources.

Here are the nominees for Best Brand: Entertainment/Character/Toy -Animated.

Successes in this program include the “Galeries Lafayette x Batman” operation that provided a sales boost at the Paris retailer. The sell-through ran at double the usual rate, with 80 exclusive products created with international & local brands. A six-meters high Batman Mask was displayed on Champs-Elysées, known as the most iconic avenue in Paris.

Since its U.K. launch on CBeebies, “Bing” has seen many successes. It now broadcasts in 120 territories with more than 6.5 billion YouTube watch time minutes and is the fastest growing Facebook channel for a pre-school show.

“Bing’s” ever-expanding licensing program now has more than 100 licensees in Europe. It is already the number eight toy brand in Italy overall. Master Toy partner, Golden Bear, had a phenomenal launch in autumn/winter 2019, with Bing toys proving to be the company’s fastest selling range in years.

“Boonie Bears” has the number one animation brand in China since its debut. Boonie Bears has partnered with more than 200 licensees at home and abroad, such as Master Kong and McDonald’s. There are more than 3,000 types of licensed merchandise and the annual sales of merchandise reached more than 735 million USD. It’s the first animation brand in China to engage in licensing in the categories of medicine and home decorating.

Since its release in 2017, BT21 has recorded more than 3.3 billion Twitter exposures and more than 19 million SNS followers. It took less than 90 minutes for the BT21 X CONVERSE collection to sell out online and only 2 hours for BT21 X Anti Social Social Club – of which 70 percent of sales were made in the U.S., proving its strong fan base beyond Asia. In addition, other deals like the limited edition ‘Leica SOFORT BT21’ sold out in record times.

“44 Cats” is proving a long-term success and already boasts recognitions including an award from the Media Observatory of Italian Parents Movement, awarding the series as a family friendly show promoting a harmonious view of community, while the second one was the Golden Dolphin for Best Animated Series at the Xiamen International Animation Festival. It is growing tremendously in terms of subscribers and views on YouTube, and ratings on TV and VOD are increasing worldwide.

2019 was one of the biggest years to date for “Peppa Pig,” with multiple global activations amplifying brand awareness throughout the year. This included Chinese New Year’s Year of the Pig theatrical release and retail promotions, eOne’s 15th anniversary celebrations for Peppa in U.K. and Australia, a multi-territory brand collaboration with Hunter, India’s Cricket World Cup campaign, additional World of Play attractions, new live orchestral show format and the brand’s successful entry into the music charts which resulted in 24 million global streams in just 6 months.

“PJ Masks” enjoyed another year of growth in 2019, become the number three largest preschool toys property in the U.S. The brand’s success was fueled by the launch of new episodes from season three and expansion into new markets including China where the series launched on CCTV in March. A packed schedule of partnership activations and retailtainment tours powered up fan engagement and helped drive retail footfall. The new album release built on the brand’s track record and delivered 58 million global streams whilst a new coding app Hero Academy contributed to a total of 81 million app downloads globally.

Pop! is a phenomenon with products spanning the entire globe.  International sales grew 57 percent in 2018 as Pop! started amassing fans from all over the world.  The Pop! train is going full speed ahead.

For more than 30 years, millions of fans globally have been collecting, building, painting and playing games with armies of miniatures – from space Marines to dragons and everything fantastical in between. Warhammer has not only withstood the test of time and been a presence on the high street for more than three decades, sales have doubled from £125 million to £257 million in the last three years alone. With new partnerships including Marvel, Bandai and Funko, a successful publishing division and a live action TV series in development, Warhammer, is set for another record-breaking year.