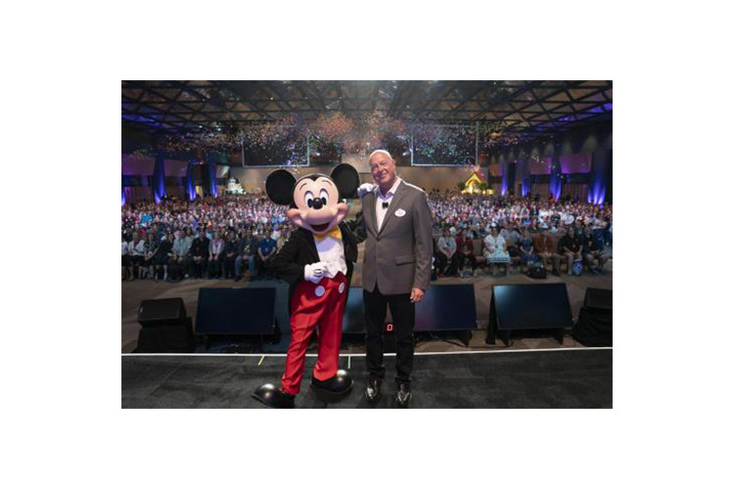 During a speech delivered at the D23’s Destination D: Celebrating Mickey Mouse event on Nov. 17 in Orlando, Fla., Chapek unveiled images of two signature attractions planned for Star Wars: Galaxy’s Edge, a new Star Wars-themed land which is set to open at Disneyland Resort next summer and at Walt Disney World Resort in fall 2019.

Academy Award-winning composer John Williams will create original Star Wars music exclusively for the areas, which Chapek debuted at the event. An additional Star Wars resort experience landing at Walt Disney World was also detailed. “We are currently in the midst of one of the most extraordinary periods of expansion in our history,” says Chapek. “We are always pushing the boundaries of what’s possible as we deliver world-class experiences and attractions, new hotels and entertainment, itineraries and destinations for our guests.” Chapek also revealed plans for Disney to launch the second phase of i#ShareYourEars, its social media campaign that celebrates Mickey’s 90th Anniversary. From Nov. 18-27, fans can take a photo with their “Mickey Mouse ears”–or any creative “ears”–and upload them to Facebook, Instagram or Twitter.

Star Wars: Galaxy’s Edge ride will put the fan in the driver’s seat in one of three positions aboard Millennium Falcon: Smugglers Run. On Star Wars: Rise of the Resistance, guests can take part in a battle between the First Order and the Resistance, as well as a battle with Kylo Ren. The experience will work with the Play Disney Parks app.

Music for the attraction will also feature music from Williams, recorded by the London Symphony Orchestra at Abbey Road Studios.

The new year will see Disney continue to celebrate Mickey Mouse through experiences including Mickey & Minnie’s Runaway Railway, a ride-through attraction that brings two-dimensional animation into a real-world experience, which is set to open in the fall. The ride will offer an original story and theme song. Disneyland Resort will host the Get Your Ears On–A Mickey and Minnie Celebration, a blend of entertainment, food and merchandise to the resort.

On Jan. 18, “Mickey’s Mix Magic” will take place at Disneyland Park and see a dance party that features projections, lasers and more over the entire park. Mickey’s Soundsational Parade will return to Disneyland Park on Jan. 25 with a new format featuring Mickey, that will lead the event down Main Street U.S.A. From Jan. 18 through Sept. 30, Mickey & Minnie’s Surprise Celebration at Magic Kingdom will offer new food merchandise and entertainment including a dance party with Minnie, Mickey and their friends and an opportunity to see Mickey and Minnie in their newly-designed birthday outfits.

Disney Cruise Line will launch its Mickey & Minnie Surprise Party at Sea, a deck party aboard the Disney Fantasy, next year. An all-new cinematic nighttime experience, Wonderful World of Animation, is coming to Disney’s Hollywood Studios on May 1 as part of the 30th Anniversary of Disney’s Hollywood Studios. The show will use state-of-the-art technology to take guests on a magical journey through more than 90 years of Disney animation, all beginning with Mickey. Chapek spoke about the continued revamp of Epcot, which will honor the park’s original design with more relevant features. A new Ratatouille-inspired experience, Remy’s Ratatouille Adventure, will appear in the France pavilion, while a Beauty and the Beast sing-along, from live-action film producer Don Hahn, will appear in addition to an updated O Canada! 360-degree show.

Meanwhile, the Disney’s Riviera Resort, inspired by the European grandeur Walt Disney experienced in his travels along the Mediterranean coastline, will open in fall 2019, the 15th Disney vacation club property.