The collection will include four coins in total including scenes and characters from the first book. 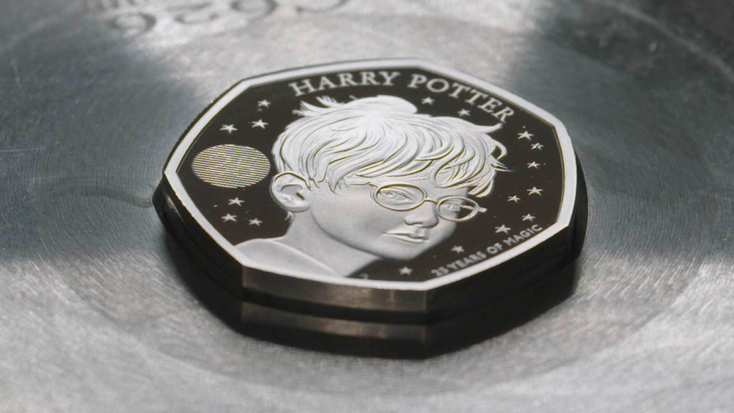 , to celebrate 25 years since the J.K. Rowling novel “Harry Potter and the Philosopher’s Stone” was first published in the U.K.

Created in partnership with Bloomsbury Publishing, The Blair Partnership and

, Consumer Products, The Harry Potter coin is available on a range of denominations including 50p. It is the first of four coins modelled by Ffion Gwillim at The Royal Mint, which feature the work of Jim Kay, the artist who created the first fully illustrated edition of this Harry Potter story.

in color for the first time on official U.K. coins. Many of the coins in the range also feature an enchanting ‘latent feature’ which rotates in the light to reveal a lightning bolt and the number ‘25’ to mark the anniversary year of the novel, first published in in 1997 by Bloomsbury Publishing.

“As the official maker of U.K. coins, we are delighted to make a spellbinding coin collection to celebrate the 25th anniversary of Harry Potter and the Philosopher’s Stone,” says Nicola Howell, chief commercial officer, The Royal Mint. “The first coin in the collection, celebrating Harry Potter, is expected to be in high demand, as it is amongst a small amount which will see a portrait change during the series. Her Late Majesty will feature on the first two coins launching in 2022, while the final two coins in the collection will feature the official portrait of King Charles III in 2023.”

“It hasn’t really sunk in yet,” says Kay. “It is the same for most aspects of publishing – because you are on your own all of the time in a studio, none of it quite seems real until you see the book on a shelf in a shop. Then you think ‘oh yeah! I did that!’ This is completely new to me though, a coin!”