KFC Brings the Colonel to Comic-Con 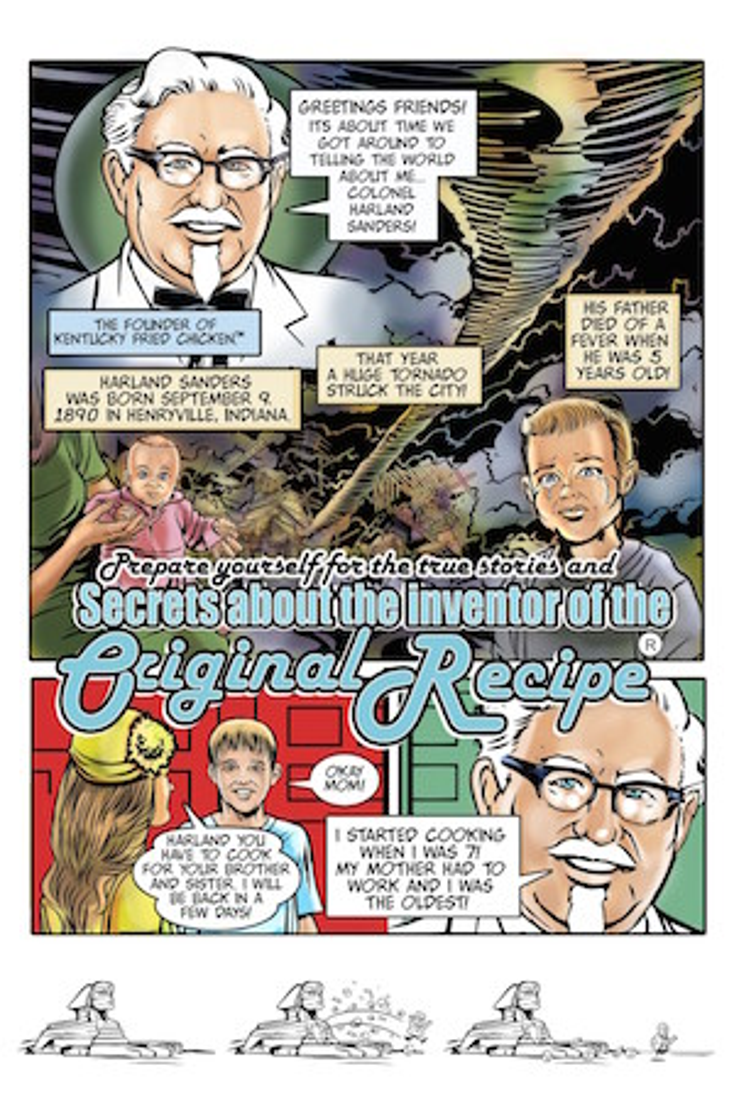 The colorful life of KFC's founder was first immortalized this past May in a brand campaign that featured the interactive archive site Hall of Colonels, which chronicles the chicken salesman's life from sixth grade dropout and gun fighting gas station owner to fried chicken magnate. Now, KFC is bringing the site to life in the graphic novel

, a limited edition comic that will be distributed around San Diego's Gaslamp Quarter by costumed Colonels and Colonettes on Friday.

"Harland Sanders wasn't born 'The Colonel.' Like most comic book heroes, he started out as an underdog and overcame obstacles that gave him superhuman cooking skills and an amazing superhero costume. Both catapulted him to iconic status," says Kevin Hochman, chief marketing officer, KFC U.S. "We thought a comic about the Colonel's

true-life origins story would be interesting to fans, as well as anyone who loves an amazing superhero story–only this one is 100 percent true."

comic will be poly-bagged with the Colonel's iconic black ribbon tie and select packages will also include collector's edition comics.

Additionally, TV network Adult Swim and KFC will bring together Colonel Sanders and the Robot Chicken for the very first time in a multi-platform program spanning on-air, online and on-site activations.

Through the partnership, Stoopid Buddy Stoodios, the studio behind "Robot Chicken," have created three 60-second custom stop-motion spots starring the Colonel and Robot Chicken in an epic space adventure that will play out over the next four months.

The first episode premieres today at the Adult Swim on the Green screening event, just before it debuts on Adult Swim later that evening.

The partners have also created seven life-sized Wi-Fi-enabled Colonel Sanders statues positioned around various intersections of the Gaslamp Quarter. Each statue features Sanders' iconic smile and traditional white suit, but with a cosplay twist. When con-goers locate the Colonel statues and connect to the Wi-Fi, they'll be directed to a co-branded KFC and "Robot Chicken" digital hub to check out KFC and Robot Chicken custom content.