NFL x Nickelodeon co-branded collection is also launching ahead of the game. 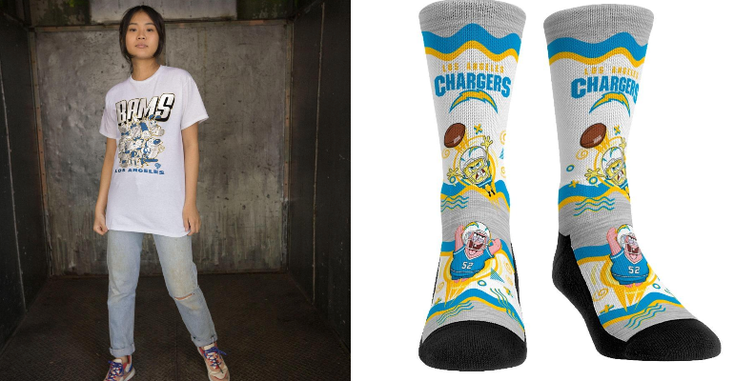 Nickolodeon/NFL
An NFL x Nickelodeon collaboration offers a kid- and family-focused presentation featuring enhanced graphics, augmented reality and Nick characters. The show airs alongside the CBS Sports broadcast of the San Francisco 49ers taking on the Dallas Cowboys during the NFL Wild Card Game on Nickelodeon on Sunday, Jan. 16.

Following the success of last season’s telecast, this year’s “NFL Wild Card Game on Nickelodeon” will feature enhanced original on-field graphics, advanced augmented reality including an AR blimp that will fly throughout the stadium, a special pregame and halftime presentation, guest appearances from Nickelodeon characters and much more for kids and families. Iain

Armitage (CBS's “Young Sheldon”) will return to help explain penalty calls during the game, and one of game’s top performers will once again be presented with the Nickelodeon Valuable Player (NVP) award which can be voted on at NFLNickPlay.com. This season, “NFL Slimetime” – a weekly show on Nickelodeon airing Wednesdays at 7 p.m. ET – included weekly NVP awards, featuring fun and slime-filled celebrations by the players.

At halftime, look for an exclusive look at Nickelodeon’s new animated series, “Big Nate,” based on the best-selling children’s books and comic strip written and drawn by Lincoln Peirce and set to debut on Paramount+ in early 2022.

and at FOCO.com and