Is it a zebra? A unicorn? Yes and yes. Find out how the creator of Zoonicorn turned to Licensing Expo Virtual to help expand an idea into a brand. 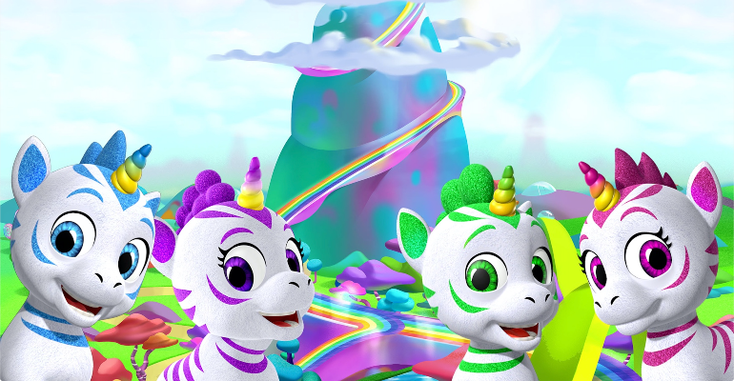 Zoonicorn is a character-based preschool entertainment property for kids ages 2-6, created by Mark Lubratt. The concept started with a discussion between Lubratt and a friend from South Africa, who wanted trademark protection in the U.S. for a project her mom was working on, says Lubratt. That project took shape as a zebra/unicorn hybrid called a “Zoonicorn.”

Along with the new creature concept, a series of fantastical characters popped into his head. He also assumed the spelling would start with “Zoo.” But it turned out that his friend’s mom’s concept was for adult porcelain figurines.

“Not typical full-grown animals, but cute pudgy young creatures with big round eyes, inviting features and a short, immature horn,” says Lubratt, who also told his friend, “There’s a children’s brand all over this ... we have to get rights from your mom.”

Several years passed and Lubratt lost touch with his friend, but he never let go of the idea of “Zoonicorns.” In 2000, he wondered what had happened to

the original trademark and discovered it had been abandoned. He immediately filed paperwork to form an LLC and acquired the trademark in 2012. Through the years, he revisited the concept, realizing he needed something beyond just cute images. He eventually came upon the idea for the world the creatures would live in.

“In 2012, I initially wanted to focus on the ‘zoo’ as the ‘zoological’ and take animals from around the world to use as a vehicle to help kids along,” says Lubratt.

One of Lubratt’s very first memories was a nightmare. He used that to build on an idea of helping kids through an animal dreamland story line. The Zoonicorns inhabit the dreams of young animals, taking them on amazing adventures to help learn important social-emotional and problem-solving skills. When the dream is over, the young animals wake up feeling empowered to overcome whatever challenges they are facing. In college, he took a class from Amar Bose (creator of Bose speakers), who was an avid believer that everyone is capable of astounding things. Lubratt felt that was a message that could communicate a message of self-belief and encouragement to kids wherever they are.

“It drives me absolutely nuts when people tell kids they’re not capable,” says Lubratt. “I started to explore that idea and found a boutique publishing house and started working on a book.”

Right from the start, he recognized the potential for Zoonicorn to become a children’s brand. Then it was just a hunt to find people who shared that vision. After the first book, he went to a plush company.

“I knew I needed props to show to people to help illustrate the idea,” says Lubratt. “In 2013, I went to my first Licensing Expo. I just attended, I didn’t exhibit. I went to every seminar and kept my eyes and ears open. I remember one seminar was about how to evaluate children’s brands. One of the things said was that a brand should ‘not be a one-trick pony, so not a single story.’ And that told me I had to broaden the brand.”

Want to learn more? Check out the August issue of License Global, out now!