The publication commemorates the 40th anniversary of the heavy metal band’s album, “Screaming for Vengeance.” 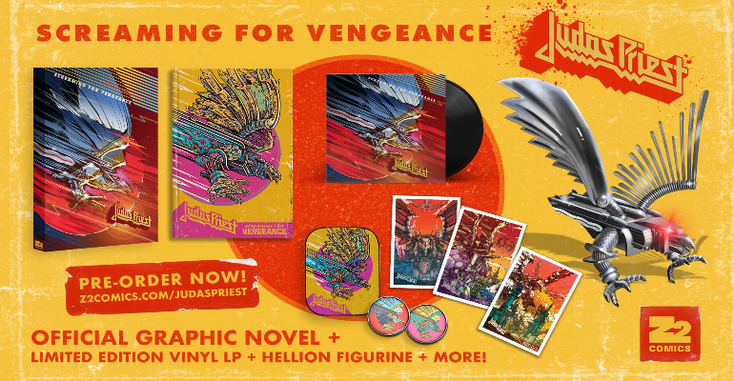 Z2 Comics will release an original graphic novel based on heavy metal band, Judas Priest, to be released in 2022 in time for the anniversary of the band’s album, “Screaming for Vengeance.”

“I cannot overstate what an inspiration Judas Priest has been to me, personally,” says Hoseley. “I was already a fan of the band, when ‘Screaming for Vengeance’ was released, but no one was ready for the impact it had. That incredible cover art? Those songs? That album became my daily soundtrack and creative fuel, to the point where I wore the cassette out in my car. To be able to contribute to a project inspired by these songs that mean so much to me? Well, that is an honor and a responsibility I take very seriously.”

he discusses the process of creating the award-winning album cover design and the origin of the metallic bird of prey now known as, “The Hellion."

As part of the expansion of Z2's product offerings, Clint Weiler – newly appointed vice president, collectibles, Z2 and founder, Aggronautix – has designed a detailed Hellion statue, with battery-operated LED "electric eyes" in celebration of both the original album design and the dramatic conclusion of the novel.

“Judas Priest: Screaming for Vengeance” will be released in softcover and hardcover formats in finer bookstores, comic shops and record stores in July, with special limited-deluxe and super-deluxe versions featuring an exclusive anniversary vinyl LP, prints and more available to preorder now exclusively through the Z2