Backed by Quincy Jones, OneOf has partnerships with the GRAMMY Awards, iHeartRadio and MusiCares. 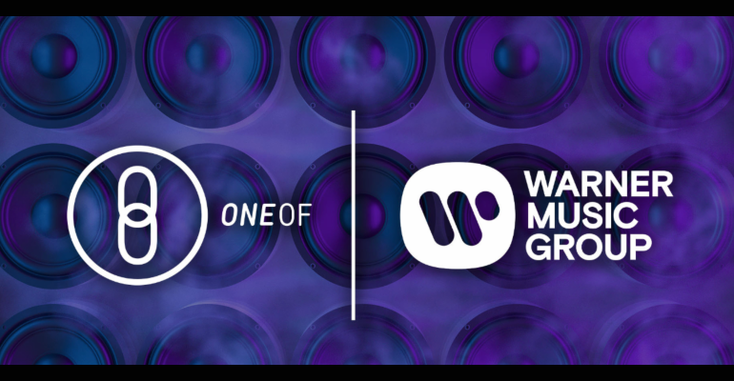 WarnerMusic/OneOf
OneOf has announced it has formed a first-of-its-kind preferred partnership with Warner Music Group (WMG) to see the company create exclusive NFTs for a range of artists across WMG's catalog of music content. OneOf's Green NFT platform mints NFTs up to 2 million times more energy-efficient than the competition and is specifically designed with the music community in mind, offering NFTs from collectible and generative PFPs to music royalties and IRL experiences.

"Web3 is a massive leap forward in technology; it will expand the scale and scope of both human and machine interactions far beyond what we can imagine today," says Oana Ruxandra, chief digital officer, executive vice president, business development, WMG. "Partnering with OneOf, a leader in the emerging technology space of Web3 and NFTs, gives our artists an edge in more authentically building one-to-one relationships with their fans and winning in the new Web3 economy. We're excited to see what's possible."

to music royalties, NFTs and Web3 represent the pulse of consumer demand and an exciting future for the music industry," says Lin Dai, chief executive officer, OneOf. "We are thrilled to partner and innovate together with Warner Music Group and use our cutting-edge Web3 technology to bring their iconic labels and world-renowned artists to the next 100 million fans on blockchain."

WMG is home to creative artists, songwriters and brands across the globe. The company includes such labels as Atlantic, Warner Records, Elektra, and Parlophone – with a roster of musicians like Ed Sheeran, Dua Lipa and Lizzo.

OneOf, which first appeared in May 2021 and is backed by entertainment producer Quincy Jones, is a platform for the music community, offering solutions for artists and fans eager to explore the world of NFTs without high minting cost or the complexity of blockchain technology. In addition to WMG, OneOf has recently announced a three-year collaboration with the GRAMMY Awards and partnerships with iHeartRadio and MusiCares. Since going live in September, OneOf has launched NFT collections with Doja Cat, Whitney Houston, Alesso, The Game, Chief Keef, Pia Mia and other artists.