In Memory of Eric Carle

The beloved children’s author Eric Carle has passed away at the age of 91, leaving behind a legacy of childhood memories. 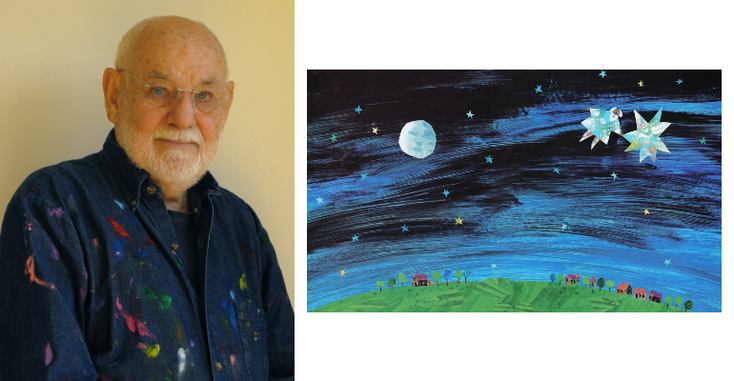 The Carle family has announced that Eric Carle, artist, illustrator and writer, passed away peacefully and surrounded by family members on May 23 at his summer studio in Northampton, Massachusetts. Carle was 91.

Carle was born is Syracuse, New York on June 25, 1929, and at the age of six moved with his parents Johanna and Erich Carle, both German immigrants, back to their hometown of Stuttgart, Germany. After graduating in 1950 from the Academy of Fine Arts Stuttgart (Akademie der bildenden Künste), he fulfilled his dream to return to the U.S., and in 1952, with a portfolio in hand and $40 in his pocket, he arrived in New York City. With the help of the illustrator and art director Leo Lionni, who would go on to become a mentor, Carle landed a job as a graphic designer at

He was drafted into the U.S. Army during the Korean War, and after discharge he returned to his job with

Later he became an art director of a medical advertising agency, L.W. Frolich.

Eventually, he was promoted to oversee international hiring, recruiting art directors for the agency’s international offices (London, Mexico City and Frankfurt), a job that took him away from designing himself. He soon left and began a career as a freelancer designing book jackets, album covers and eventually children’s books.

Since his first book launch more than 50 years ago, Carle launched more than 70 children’s books during his career, selling more than 145 million copies of his titles worldwide after gaining recognition for his work on

Perhaps Carle’s most famous work is

First published in 1969, the multi-award-winning book sold more than 50 million copies – the equivalent of a copy per minute since launch – and is widely considered one of the greatest children's books of all time. Carle continued to create art until early May 2021.

Carle is survived by his two children from his first marriage to Dorothea Carle (née Dorothea Wohlenberg), Rolf Carle and Cirsten Carle, and Rolf’s wife Teresa Toro; his sister Christa Bareis, and his sister-in-law Rita Wiseman. Eric was preceded in death by his wife of 42 years Barbara ‘Bobbie’ Carle (1938-2015). Carle was a resident of Key Largo, Florida, where he and Bobbie lived since 2004.

Online condolences, memories, and photos may be shared with the Carle family here.

understands the impact Carle’s creativity had on the world and would like to extend the entire team’s condolences to the Carle family, friends and hard-working team.

The World of Eric Carle