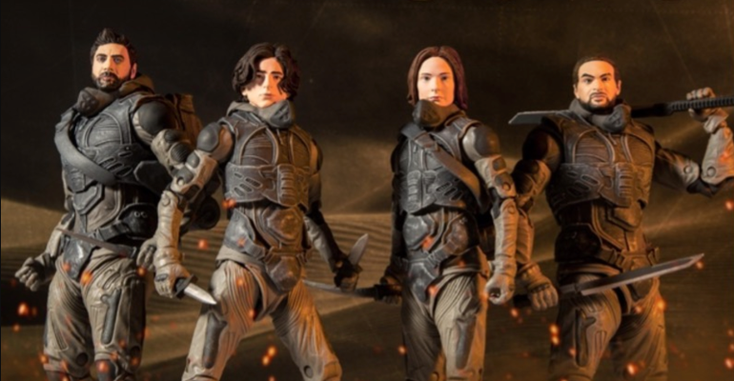 Coming off the heels of its success at the global box office and the announcement of plans for “Dune: Part Two,” Legendary Entertainment, in partnership with Warner Bros. Pictures, has announced a licensing and merchandise program for Denis Villeneuve’s “Dune,” the film adaptation of Frank Herbert’s novel of the same name.

A curated collection of products is rolling out, spanning traditional categories including toys, games, collectibles and apparel, but also features lifestyle and fashion activations.

McFarlane Toys and Dark Horse are on board with a range of collectible figures for all tiers of distribution, highlighting the film’s cast. Funko is debuting a collection of signature Pop! figures featuring Dune’s characters. United Cutlery has launched a line of replica weaponry from the film, including the Crysknife. APMEX has created a set of limited-edition coins and collectibles inspired by the film. Lineage Studios has developed a series of replicas from the set

pieces, props and jewelry that were featured in the film. Gotham City, Abysse and Aquarius are offering fans gift and novelty items ranging from posters and keychains to backpacks and tin boxes. Mondo and Bottleneck Gallery are highlighting artist-driven interpretations of the world of “Dune” for wall décor. Theory 11 is developing playing cards with bespoke artwork that features Duke Leto as the King and Lady Jessica as the Queen, while Bear Walker has created a custom-made wooden skateboard showcasing the desert landscape and Sandworms of “Dune.” Additionally, fans will be able to experience “Dune” 365-days a year with a new calendar offering from Sellers Publishing. U.K. pop culture retailer Forbidden Planet is developing a host of products across home, gift and apparel categories.

Several fashion and accessories partners have come on board to create capsule collections inspired by the film. High-end casual couture brand Demobaza has lent its signature minimalist and futuristic styling to a capsule collection of looks inspired by the film. APL’s exclusive line of athletic footwear takes design and color inspiration from the different factions highlighted in “Dune” – House Atreides, House Harkonnen and the Fremen. Eyewear brand Illesteva is launching a similarly inspired line of sunglasses handmade in Italy and France, while avant-garde accessories designer Chris Habana has crafted a collection of “Dune”-inspired jewelry items that are both high-fashion and wearable. Mad Engine is creating a wide range of products for mass retailers and ecommerce, while Redbubble will enable fans to put their own interpretation of Dune designs into the marketplace with fan-driven merchandise. Trademark Products will be developing apparel for the U.K/ market, while ulkin will launch a fashion collaboration in South Korea.

Calm, the mental wellness app for sleep, meditation and relaxation, has used audio from the film to create in-app soundscapes inspired by the sounds of the planets Arrakis and Caladan.

Insight Editions, in cooperation with Legendary Comics, is giving fans a comprehensive look at the making of the film with “The Art and Soul of Dune,” written by “Dune” executive producer Tanya Lapointe. Partnering with Herbert Properties, “Dune: The Official Movie Graphic Novel” is now available for pre-order exclusively on Kickstarter (in cooperation with Rocketship Entertainment), followed by a book market mass release. The graphic novel adaptation, from the creative team of Lilah Sturges, Drew Johnson, ZID and Niezam, brings actor Timothée Chalamet and the cast to the page through artwork to tell Frank Herbert’s seminal hero’s journey. Exclusive merchandise and collectibles will also be offered through Kickstarter. Herbert’s original “Dune” novel has been reskinned with new cover artwork from the 2021 film.

Gale Force Nine, partnering with Genuine Entertainment and various publishers, is offering several “Dune” tabletop games. Dune: Imperium from Dire Wolf Digital marries deck-building and worker-placement in an immersive experience inspired by the film. Modiphius Entertainment explores the full scope of the franchise over time in “Dune: Adventures in the Imperium,” an expansive tabletop roleplaying game series. Both games are available at retail now. In the gaming and gambling space, global gaming giant Aristocrat Technologies is bringing the intrigue of “Dune” to casinos worldwide with a branded slot machine filled with sandworms, spice and a wealth of immersive content. For video game fans, Funcom is currently developing PC and console games for rollout over multiple years. Two of these games are currently in development, with one having already been announced as an open-world multiplayer experience. Additionally, mobile games and virtual reality are also in the works to further extend the franchise.