The “My Little Pony” Magical Gallery will be live until Nov. 1. 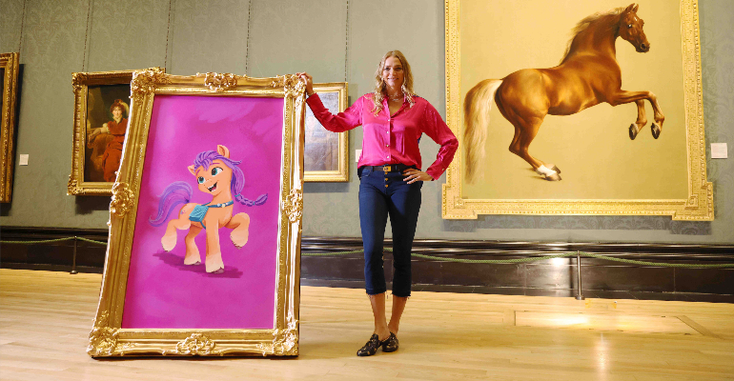 Visitors to London’s National Gallery will be able to transform ten of the museum’s most famous horse paintings into My Little Pony portraits, thanks to an augmented reality (AR) program called Pony Trail.

To mark the upcoming release of “My Little Pony: A New Generation” on Netflix, the gallery is giving visitors the chance to transform equine classics, including George Stubbs’ “Whistlejacket” and Theodore Gericault’s “Horse Frightened by Lightning” into Sunny Starscout, Izzy Moonbow and friends from the new film in a fun and educational interactive trail for families.

“I’m so excited to be part of this magical initiative at the National Gallery,” says Jodie Kidd, who commentates on all ten paintings in the app. “There are so many timeless masterpieces on show at the Gallery and this wonderful app does a fantastic job of helping make them even more accessible and entertaining. Providing children with a thrilling treasure hunt to discover ‘My Little Pony’ characters, crystals and magical

lands and learn about classic works of art along the way. I was brought up around horses and adored My Little Pony from a young age, so it was a childhood dream come true providing the commentaries on the app, and I can’t wait for visitors to start discovering Sunny, Izzy, Pipp, Zipp, Hitch and friends hidden among the masterpieces!”

The AR app, free to all visitors and accessible through QR codes around the gallery, will use image recognition to instantly augment ten iconic horse paintings into the New Generation of Earth Ponies, Unicorns and Pegasi, all brought to life by children’s artist Rachael Saunders.

The new virtual artworks will feature original commentaries from stars of the upcoming film, providing fun greetings and facts straight from the horses’ mouths.

The app, which is live now, will take visitors around the entire gallery using a digital map bringing the land of Equestria to life. They will be able to navigate many of the gallery’s rooms to find the ten magical canvases, with AR created by design studio Playlines, transforming the full-size classics to modern artworks.

All ten ‘My Little Pony’ paintings have been crafted by Hampshire illustrator Rachael Saunders, who has previously illustrated book covers for Roald Dahl and Rudyard Kipling classics.

The ten paintings within the National Gallery that can be transformed through the My Little Pony Magical Gallery app are: