The Point.1888 will represent the licensing program throughout the U.K. 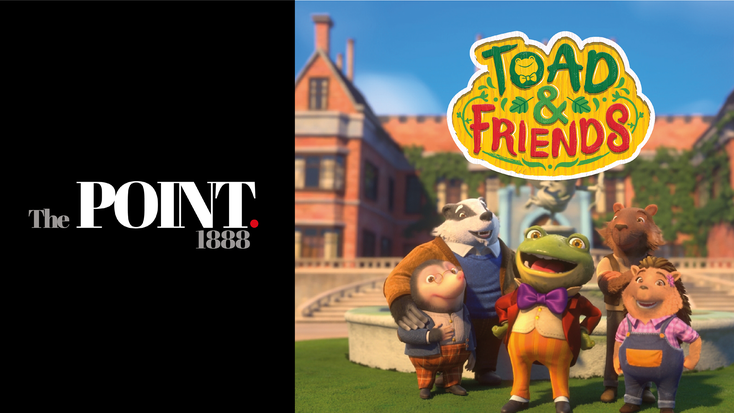 has announced a new CG animated series, “Toad & Friends,” based on the British classic novel, “The Wind in the Willows,” by Kenneth Grahame.

Honoring the legacy of the original book, “Toad & Friends” features a refreshed cast of characters and new storylines to resonate with a modern audience. The original characters remain and are now joined by female characters including Hedge, Tinker, Heron, Adder and Mrs. Otter.

Aimed at 4-7-year-olds, “Toad & Friends” is produced by London-based Hoho Entertainment, animated in Scotland by Wild Child Animation and directed by Tim Searle (“Dangermouse,” “Dennis and Gnasher”). The new series is developed and supported by the National Lottery through Creative Scotland and produced with the support of the Creative Media Program, MEDIA of the European Union, and is set to premiere as an original on

’s preschool brand, Cartoonito, across EMEA and on

on board to represent and manage the licensing program as the property looks to find new partners throughout the U.K. It is now looking for partners covering categories including toys, apparel, homewares and more.

“Since it was first published, over 85 million copies of ‘The Wind in the Willows’ have been sold in more than 29 languages, so it’s not just a British classic,” says Helen Howells, joint managing director, Hoho Entertainment. “‘Toad & Friends’ celebrates the countryside and for children, the simple joy of being outdoors as they follow their favorite characters on brand-new, funny adventures in which they discover moral courage, respect and the value of friendship. We’re absolutely thrilled to be partnering with The Point. 1888 on this beautiful, modern adaptation of a much-loved classic tale.”

“‘Toad & Friends’ is an amazing property that is going to bring an iconic story to a new generation of children,” says Bethan Garton, chief commercial officer, The Point.1888. “We can’t wait to get to work and create products that speak to the classic nature and values of the book, but with the show’s new creative and humor. There is so much potential here to deliver a licensing program that fits both narratives.”

The Point.1888 is exhibiting at Brand Licensing Europe. Register for the event