The cameras are made from refurbished materials. 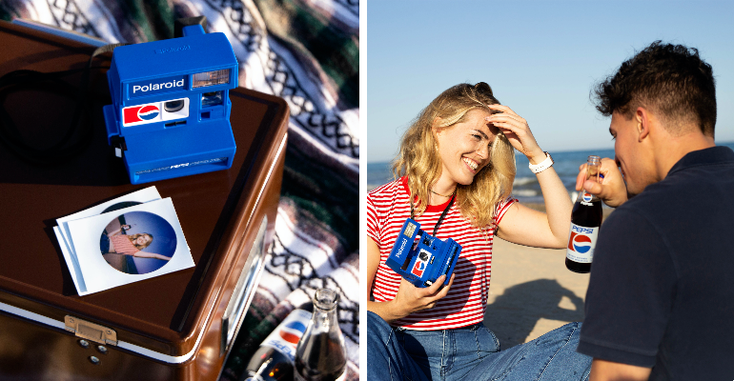 Retrospekt, the official licensee of Polaroid, is teaming up with Pepsi to launch the Polaroid 600 Pepsi Instant Film Camera.

This new version of Polaroid features a throwback design using refurbished internal photographic components taken directly from vintage Polaroid instant cameras made in the1980s and 1990s. It’s wrapped in blue that aligns with Pepsi brand and style from years past.

“In the 1980s, Polaroid produced a limited number of cameras that made use of the then-current Pepsi branding,” says Michael Kempen, creative director, Retrospekt. “As the years go by, they’re becoming increasingly difficult to find, but demand is still high.The continued interest year after year put this at the top of our list of collaborations we wanted to bring back. When we went to create a new camera with a throwback feel, we didn’t want to rehash what the original camera had

already done. Pepsi has always had a strong graphic style which is executed across a variety of products, ad campaigns and other applications. For us, the period in the early-to-mid ’90s stuck out as a prime example of this. And, since Polaroid was still producing this style of camera into the ’90s, it means these logos and brand elements are an authentic fit for the camera’s original era.”

“What makes this partnership so perfect is the reunion of two iconic brands on one of the most classic pop culture products of all time, the Polaroid Instant Camera,” says Joanne Loria, executive vice president, The Joester Loria Group. “Its appeal hits on two key passion points for today’s gen z and millennial consumers, it’s retro-cool and it’s recycled.”

The Polaroid 600 Pepsi Camera is available online on

and at select retailers.