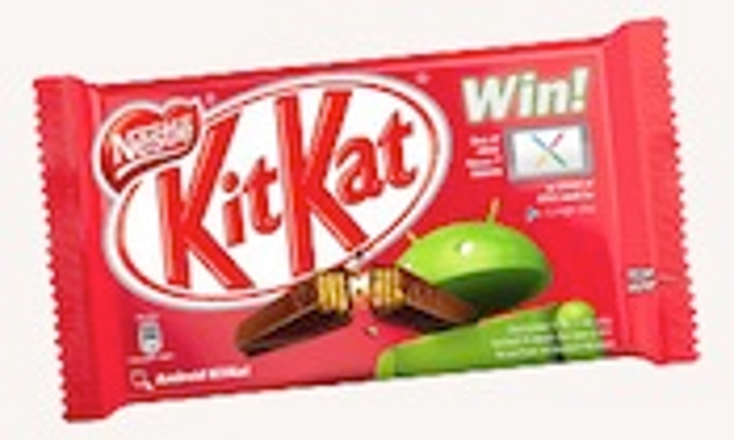 In a surprise move, Google chose a branded candy name for the latest version of its mobile operating system, teaming up with The Hershey Company for Android KitKat.

The new OS partnership is part of a larger global partnership between Google and Nestle, from whom The Hershey Company licenses the Kit Kat brand in the U.S.

The name follows in the confectionary trend of other Android OS versions (Cupcake, Jelly Bean), although most pundits predicted that ‘K’ would be Key Lime Pie.

"We couldn't imagine a better name for our Android K release than the chocolate treat that's been a favorite go-to snack among the team since the early days of Android," says Marc Vanlerberghe, director, Android Marketing.

To mark the release of the Android KitKat system, more than 50 million specially branded Kit Kat bars will be available in 19 countries including Australia, Brazil, Germany, India, Japan, the Middle East, Russia and the U.S. A small number of Android robot-shaped Kit Kat bars will also be offered as

prizes in select markets and a giant statue of an Android made out of Kit Kat bars will now reside at Hershey's headquarters in Hershey, Penn.

As part of the U.S. campaign, Kit Kat and Google will offer consumers the chance to win Nexus 7 tablets, Google Play credits and coupons for the new Kit Kat Minis, in a promotional sweepstakes on Kit Kat wrappers.

"We are proud and excited to have one of the world's leading mobile innovators pair up with one of America's favorite chocolate brands," says Jennifer Podhajsky, vice president, U.S. chocolate, The Hershey Company. "Google's choice to name their next Android platform release Kit Kat brings together two well-known icons from pop culture and technology and gives the classic jingle of 'Gimme a Break' a whole new meaning in the tech world."