]> Pokémon USA, Inc., isn&apos;t planning to poke around with its billion-dollar brand, as it takes on sole respo 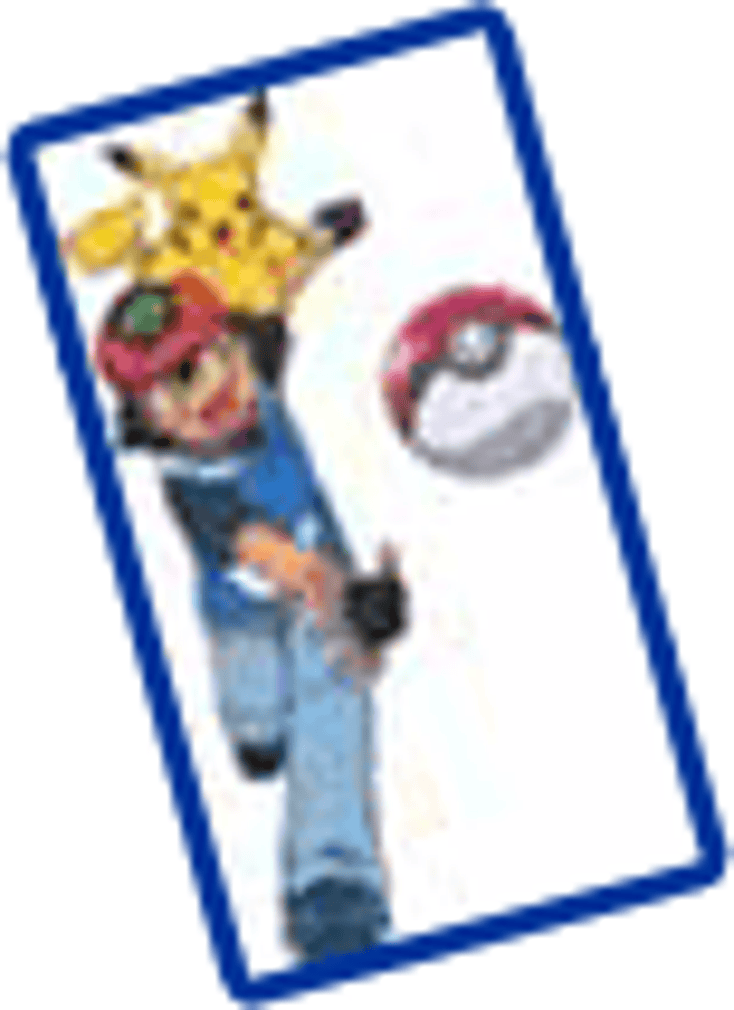 ]>Pokémon USA, Inc., isn't planning to poke around with its billion-dollar brand, as it takes on sole responsibility for Pokémon's licensing operations and rolls out a slate of 10th anniversary product.

sat down with Pokémon USA execs and licensees to discuss the brand's past successes and future initiatives.

Despite its relative youth, Pokémon has weathered a fair amount of criticism over the last 10 years, from various religious groups who claimed the property was shrouded in mysticism to assertions the TV show caused epileptic seizures in Japanese

children. Thus, to truly understand Pokémon, the brand, a little background is in order. "Pokémon began with game designer Satoshi Tajiri's memories of childhood, when every kid's desire is to make friends, be powerful, and experience adventure," explains Pokémon USA, Inc., President Akira Chiba. This, combined with his interest in playing video games and, more specifically, the communicative properties of the Nintendo Game Boy, led Tajiri and game producer Tsunekazu Ishihara to develop the first Pokémon video game, with Nintendo on board as the publisher, distributor, and one of the initial rights holders.

Following a six-year development period, the game launched in Japan in 1996 with two available versions: Red and Green. The games were some of the first to allow players to catch, collect, and train characters with various abilities, and battle them against one another in a non-violent manner (Pokémon creatures never bleed or die). Both video games experienced a slow but steady build in Japan and received a fair amount of promotion via manga publications. A spin-off card game soon followed, along with an animated series from ShoPro Japan.

At the same time, Nintendo of America was discussing what it could do to make Pokémon as viable in the U.S. marketplace. "Role playing hadn't been an incredibly successful format in the U.S. video game category, particularly on Game Boy," explains Gail Tilden, vice president, brand management, Nintendo of America, Inc. "So, there was a lot of discussion: Should we take the concept of the game and tailor it to the U.S. marketplace, or should we keep the game as is?" Ultimately, by late 1997, Nintendo decided to introduce the property in its original format. "We gathered all the rights to the Pokémon franchise into one group, which we then acquired, and launched the game in 1998," says Tilden, who was appointed to spearhead the project. "4Kids Entertainment was the exclusive merchandising agent and became our partner in helping us to extend the property."

One of the first initiatives Tilden implemented was a grassroots marketing campaign. "We sent 1 million videos to our database of consumers, alerting kids to the TV program, which was set to launch over Labor Day weekend in 1998. We also explained what Pokémon were; what video games would be coming in September; as well as cards and toys, which launched at the very end of the year, followed by the first feature film,

which ranked among the top 10 opening weekend grosses in 1999." That same year, Nintendo shopped the network rights for Pokémon at NATPE, and in February 1999, Pokémon premiered on Kids' WB!, propelling the network to the No. 1 broadcast network post for the first time ever. In fall 1999, Pokémon went into strip and was chosen by

as the cover story for its October special "Parents Guide" issue, marking the first time an animated kids' series was featured on a 4-cover collectible of the magazine. According to Betsy McGowen, senior vice president and general manager of Kids' WB!, "The network, powered by Pokémon, broke Nickelodeon's two-and-a-half-year winning streak among kids ages 2 to 11 during the highly competitive fourth quarter of 1999."

Based on Pokémon's global success, the Japanese owners opted to form a new entity in 2001 focused solely on the property, hence the inception of The Pokémon Company, along with its U.S. counterpart, Pokémon USA, Inc. At this point in time, explains Tilden, Nintendo shifted to a role in distributing and marketing video games, while Pokémon USA and 4Kids entered into a representation agreement, which ended as of 2006, when Pokémon USA chose to move the licensing group in-house. According to Pokémon USA, Inc., Director of Licensing Matthew Uppenbrink, this was a brand management decision. "We felt it was in the best interest of the property to assume all aspects of licensing. It gives us the opportunity to focus and coordinate our efforts more effectively," says Uppenbrink, adding, "4Kids has been a wonderful partner in helping to grow the property and establish it as one of the leading children's brands in the world."

Under the terms of the expiring agreement, 4Kids will continue to receive commissions for the next several years on payments made under existing Pokémon license agreements. In addition, 4Kids will continue to produce the current eighth season of Pokémon television episodes. "We've enjoyed our successful eight-year relationship with the Pokémon property," says 4Kids Entertainment Chairman and CEO Al Kahn. "We certainly wish Pokémon USA much success in its future endeavors."

Now that Pokémon USA is officially in charge, what can we expect in 2006 and beyond? The answer: continued expansion in product categories ranging from apparel and toys to board games and party goods, as well as an online retail site featuring new and exclusive merchandise. Not to mention Pokémon's many grassroots community events and value-driven partnerships. This month, Pokémon hits the road on a great American journey to 24 cities across the country. "The Pokémon Journey Across America Mall Tour gives fans of all ages the opportunity to participate in games, activities, and giveaways," says Pokémon USA, Inc., Vice President of Marketing Bruce Loeb, who adds that attendees also can qualify for the Pokémon Video Game National Championships to be held in New York City in August. "We've been building up to this," explains Loeb. "We began in 2003 with the Pokémon Rocks America Tour in three cities. In 2004, we upped it to four cities, and last year we hit five cities with a total of 45,000 attendees over the course of the event."

Meanwhile, the Pokémon Trading Card Game World Championship, now in its third year, will kick off in Anaheim, CA, this summer with more than 35 countries represented. In addition, Pokémon and the Houston Space Center will co-host a nine-day space party in the first half of 2006. "We're very focused on launching initiatives with value for both kids and parents," says Loeb. "We want these events to be fun but with an educational component. In this way, we are reflecting the property's core values." For example, he continues, "You will never see Pokémon characters use weapons. Instead, the property, along with its corresponding video games and movies, fosters teamwork and strategic skills." With this in mind, says Loeb, "we're launching a free E-learning center this spring that will offer families and teachers a comprehensive teaching system."

According to Pokémon USA's Chiba, some of the brand's most defining moments have occurred at the annual traveling events, weekly Trading Card Game leagues held across the country, and even at retail destinations. "At these gatherings you'll see Pokémon fans of all types interacting—from little kids to teens and parents. Not to mention people of all ethnicities and backgrounds, as well as those who speak different languages," explains Chiba.

According to Pokémon USA's Uppenbrink, who manages all consumer products licensing programs for the Pokémon brand and more than 40 licensees and manufacturers, the company has a good deal of merchandise in store for 2006. Pokémon 10th anniversary toys from Hasbro are set to fully launch this month exclusively at Target Stores, in a deal that runs through holiday 2006. A second retail initiative also is in the works for third quarter with exclusive logo-driven product. Basic Fun is working on 10th anniversary key chains, and Scholastic is looking to do anniversary editions of its Pokémon storybooks. Bolstering the more than 40 million Pokémon video games in circulation in the U.S., Nintendo will launch Pokémon Trozei in March, followed by Pokémon Mysterious Dungeon, as well as one or two additional titles that had not been announced at press time.

Now in its eighth season on the air in the U.S., Pokémon continues to be one of the top-rated shows on Kids' WB!, and ranked as the No. 1 broadcast program among kids and boys. "Pokémon is an evergreen property," says Kids' WB!'s McGowen. "In the show each week, there's usually a new character being introduced, new places to discover, and new battles for our likeable main characters to win. The show is the ultimate in kids' wish fulfillment and empowerment—kids traveling across a fantastical land on a journey to become champions."

Through the years, Kids' WB! also has supported the property with special events and initiatives, including "The Premiere Kids' WB! Poke-Read-A-Rama Challenge" in February 2001, "the network's first-ever national in-school reading program in more than 65,000 elementary schools," according to McGowen, who adds that the program resulted in kids reading more than 1 million books. Other promotions have included prizes such as a Pikachu car (September 2000), a trip to Tokyo's Pokémon Center (October 2000), and a chance to design a Pokémon trading card. Kids' WB! also has created many on-air events and interstitial days for the property. "For instance, we rolled out the red carpet on-air for the U.S. broadcast of the feature-length Pokémon movie,

in 2005," says McGowen. "We now are in discussions with Pokémon USA to determine how we can add extra sizzle to the TV program throughout 2006 by taking advantage of the opportunities presented by the 10th anniversary." There are many initiatives and promotional opportunities on the table, including talks centering on the all-new one-hour anniversary special.

Meanwhile, "VIZ Media will release a 10-volume, fan-voted Top 10 DVD collection in April at leading DVD retailers," says Uppenbrink, who adds that Pokémon USA is working on being more responsive to what fans want. "This time around, we want to make clear that there are core elements such as learning and social values that weren't necessarily communicated to parents in the past."