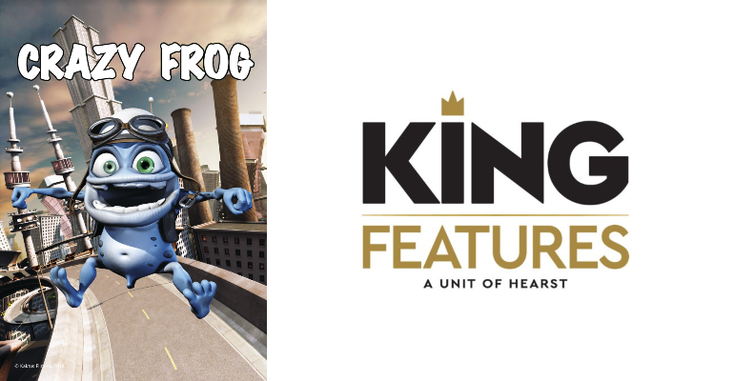 King Features Syndicate, a unit of Hearst, has announced that the viral music phenomenon Crazy Frog is joining its roster of licensing properties.

Under the agreement, King Features will represent Crazy Frog across all categories in North America, including apparel, accessories, collectibles and more.

"Crazy Frog has been a global sensation for years with its fun and catchy music, and we are thrilled to welcome this beloved character to the King Features family," says Carla Silva, vice president, general manager, global head of licensing, King Features. "The brand already has such a dedicated fanbase and we look forward to continuing growing its presence within North America through exciting content and merchandise that everyone can enjoy."

Crazy Frog, a phenomenon that went viral before social media, smartphones and apps became mainstream, is making a comeback and growing its reach with new songs and music videos, a short-form YouTube series and smartphone games. After its first debut in

As Crazy Frog continues its global comeback, King Features seeks partners across all categories to develop a merchandising program with creative partnerships targeting all ages.

King Features will kick off Crazy Frog's North America merchandising program with collectibles from Youtooz, launching later this year to coincide with the drop of Crazy Frog's upcoming new music. Youtooz will be debuting a vinyl figure collectible series worldwide, followed by a line of plush figurines.

"We are very happy to have King Features on board for the new Crazy Frog adventures," says Sigfrid Soderberg, chief executive officer, executive producer, CF Entertainment, the IP owners of the character and original creators of the animated content. "We were looking for a creative and experienced partner in licensing to further elevate our brand on the North American market and King Features felt like a perfect match. The new creative content paired with King Features experience speaks of a long-lasting relationship."