The Reign of the Queen of Halloween

Elvira continues to be a household brandname 30 years on. For more than 30 years, Elvira Mistress of the Dark, otherwise known as Cassandra Peterson, has been cultivating a name and a brand for herself, capitalizing on th

Elvira continues to be a household brandname 30 years on.

For more than 30 years, Elvira Mistress of the Dark, otherwise known as Cassandra Peterson, has been cultivating a name and a brand for herself, capitalizing on the kitschy horror movies of decades past and the spooky caricature that's evolved.

Now, in 2012, as the horror genre continues to experience a resurgence, Peterson is letting it be known that Elvira is as viable a property as it was in 1981, the year the "Queen of Halloween" entered the American pop culture lexicon.

In the early 80s, Peterson was just another struggling actress in Hollywood. One fortuitous audition for a horror host at a local station in Los Angeles, Calif., however, would land her the gig that would become her career and later spawn a wide array of movies, a nationally syndicated television series, consumer products and more.

"Elvira's Movie Macabre" launched the Elvira name into every household across the U.S. The horror host, which featured the comical Peterson

in an overtly sexy costume, touting B-movies each Saturday night, later found herself the star of two tongue-in-cheek feature films (

Elvira Mistress of the Dark

), at the helm of national campaigns for worldwide brands such as PepsiCo and Coors, the featured artist on five music CDs, the author of four books and the face behind more than 400 consumer products.

"We realized early the potential for Elvira items," says Peterson. "About a year into 'Elvira's Movie Macabre' we got a costume license, which became a huge hit at Halloween."

Other products quickly followed, including a pin ball machine range, guitars, a comic book series, slot machines and more. Wiser still, Peterson owned all rights to her character, a deal bartered in exchange for pay raises at KHJ-TV, the station that launched her series.

As the Elvira brand matured, demand continued, but a change in management was necessary. Scott Marcus of Devlin Productions and veteran licensor at studios such as Paramount and Fox Consumer Products, stepped in as licensing agent.

"The retro appeal was out there, but there was no one to exploit it," says Marcus. "This is an iconic brand–Elvira is sexy, spooky and fun. She is the 'Queen of Halloween.' The horror genre is becoming more and more mainstream, and this is a natural property for expansion."

Under Marcus' direction, the Elvira brand streamlined, opting instead to sign fewer licensees–and some who were new to the business–in order to make more quality products to satisfy a demographic that varies widely.

Today, Rubie's Costume Company's Elvira costume is a top seller. Other innovative products in the works from top-of-the-line licensees include Zippo for a range of lighters; Sort This Out Cellars for Elvira's Macabrenet, a red wine, and six gourmet sodas; Sideshow Collectibles for maquettes, figures and art prints; eOne for DVDs; Trevco Sportswear for men's and women's t-shirts; Kreepsville 666 for jewelry, belt buckles, patches, buttons, women's skirts and t-shirts; Seismic Games for an app; Farsight Studios for a digital pinball game; and Card for a set of debit/cash cards. 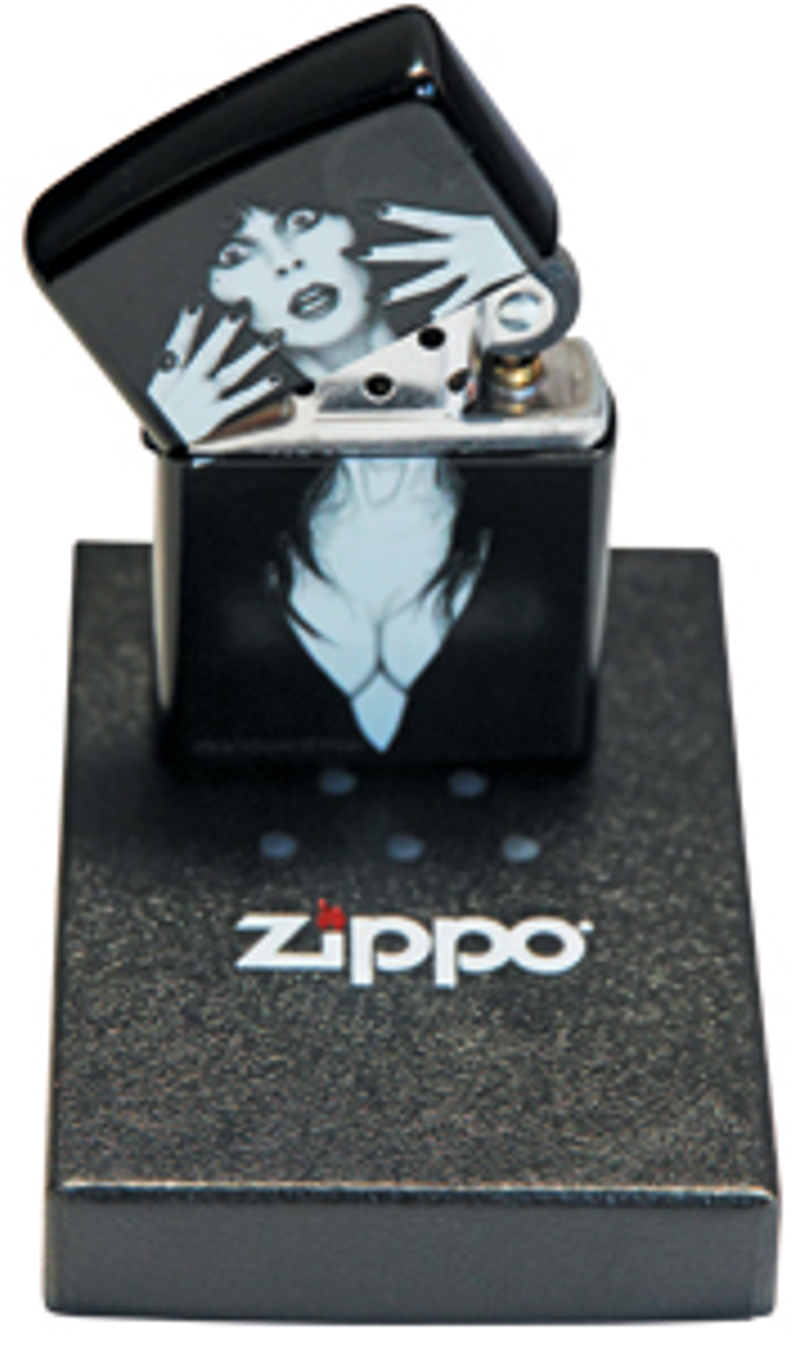 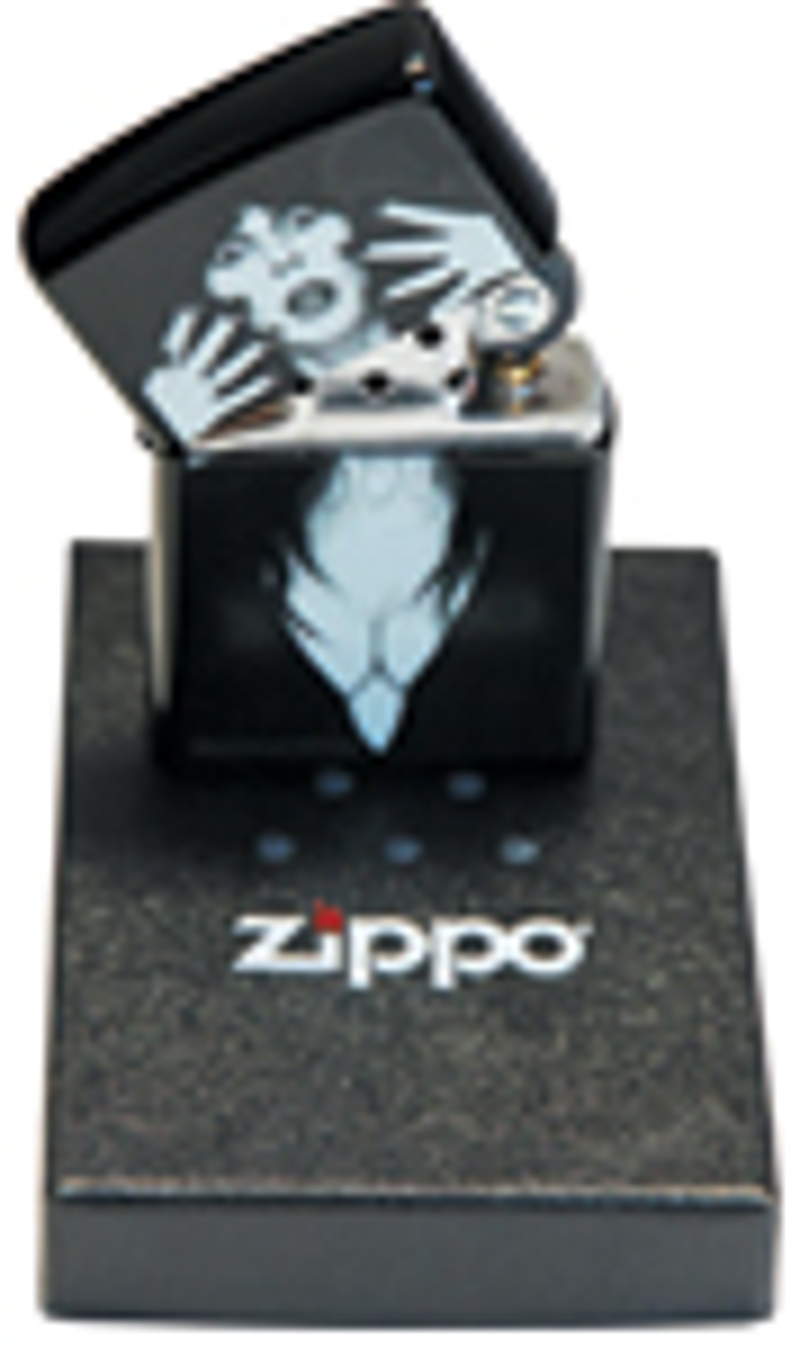 The goal is to create an Elvira lifestyle brand, bringing the horror icon into "every room in your house," says Marcus.

"Cassandra's fans want to collect [her merchandise], allowing Elvira to be a part of all aspects of your life," he says. "You're drinking with her, you're wearing her jewelry and, at the same time, you're playing her app."

Marcus believes that this is best achieved in a relationship-driven environment, where the licensee's primary function is to bring the best product possible, despite its corporate clout (or lack thereof).

"This phase is newer for the brand," says Peterson. "I think people appreciate the quality of the new products, such as from Sideshow Collectibles and Kreepsville 666."

"Even if the licensee does not have major distribution, we are able to drive solid traffic through the online site,

through social media and convention appearances."

Peterson is a mainstay on the convention circuit, with appearances regularly at Comic-Con and Stan Lee's Comikaze Expo, a new pop culture convention, in which Peterson is a co-partner. Lee, Comikaze and Advanstar are additional partners.

"We love Comikaze," says Marcus. "They just get it, and we're discussing new projects and products moving forward."

The Comikaze venture further allows the brand to expand into limited edition, exclusive product and events, such as this year's Elvira-themed environment at the Expo that featured special product from licensees and her personal collection, as well as iconic images and items from her past. Kreepsville 666 designed a limited edition t-shirt and coffin compacts for the event as well.

The brand will continue to focus on staples–apps, t-shirts, accessories and costumes–but it will also look to grow to include theme park experiences and perhaps even branded restaurants.

"Elvira has always been on the [pop culture] radar, much like Santa Claus," says Peterson. "You don't see Elvira throughout the year and then Halloween comes and it's everywhere. I am always there, chugging along and working on the brand year-round."