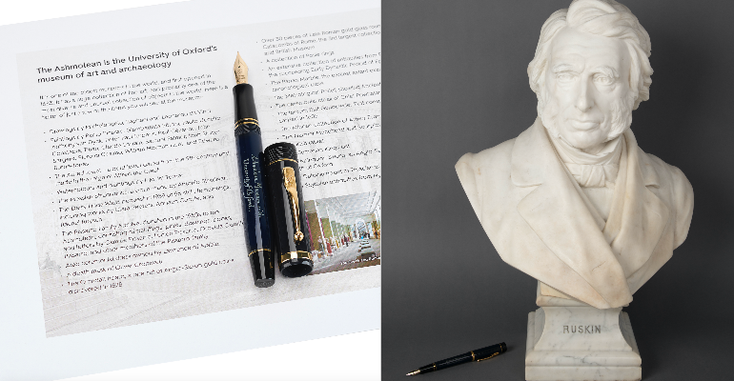 Conway Stewart have worked with The Ashmolean Museum to develop the first in a series of Ashmolean Pens, brokered by Start Licensing.

"This is a wonderful collaboration for the Ashmolean, and we are delighted to be associated with such an iconic brand as Conway Stewart,” says Declan McCarthy, pubishing and licensing head, The Ashmolean Museum.

The first Ashmolean Pen is based on the Conway Stewart Churchill pen. It has been produced in Oxford University Blue with 9-carat gold trim with English hallmarks. The theme of the first pen in the series is art critic John Ruskin, who studied as an undergraduate at Christ Church and remained connected with Oxford for most of his life. He went on to establish his drawing school at Oxford in 1871. The Ashmolean Museum houses some of Ruskin's work, including sketches and paintings of rocks, plants, birds, landscapes, architectural structures and ornamentation. The release of the pen dovetails with the opening of The Ashmolean Museum's latest exhibition, "Pre-Raphaelites Drawings and Watercolours" which will include several of Ruskin's works.

have loved working with the team at the Ashmolean Museum to produce this pen, doing the research and learning about the amazing collection on display in Oxford,” says Alastair Adams, managing director, Conway Stewart. “I would urge all readers to visit this wonderful museum.”

The Ashmolean Pen will also feature the Ashmolean's founder Elias Ashmole's hand-written 'Statutes Orders & Rules' heading on the barrel of each pen as a further link to the Museum and its history.  The pen will be sold in a presentation box and will include a bottle of ink plus a booklet that sets out the history of the Ashmolean Museum and gives an insight into John Ruskin's life.

"We are delighted to see The Ashmolean Museum and Conway Stewart working together,” says Ian Downes, director, Start Licensing. “The Ashmolean pen is a unique and original product that makes great use of the Ashmolean's collection and highlights their unique place in the Museum world. Conway Stewart are experts in their field and have developed a fantastic product. We believe the limited edition will prove extremely popular and we hope the John Ruskin pen will be the first in a series of pens from the Ashmolean. Conway Stewart also deliver a strong marketing platform for the product and have access to a global community of pen collectors. It is a consumer group who we think will respond well to the Ashmolean's collection.”