]> Techno Toddlers According to NPD Group, the pre-school electronic learning sector was worth £67m in the UK in 2004 and it has displayed astonishing

This document is based on Kids Industries own experience of electronic learning products and a series of focus groups conducted in South East London with parents and their children. All children were aged four and all families were consumers of the category. Each of the products were pitched for children 3+.

children's play with the product was facilitated and observed whilst parents observed and discussed their views with a second researcher. For brevity we have compiled this outline report by binding all observations.

As we explored each of the devices it became apparent that they are impossible to compare like for like. Each has it's own unique features and each provides a different user experience. Perhaps Bright Things' Bubble and Fisher Price's InteracTV are the most similar but even they differ in fundamental ways.

It is relatively easy for a toy manufacturer to claim the developmental benefits of a product designed for pre-schoolers. The real test is whether the child engages and the parent is satisfied with the purchase. These products are about as high ticket as it gets for pre-school and that means that you must deliver. 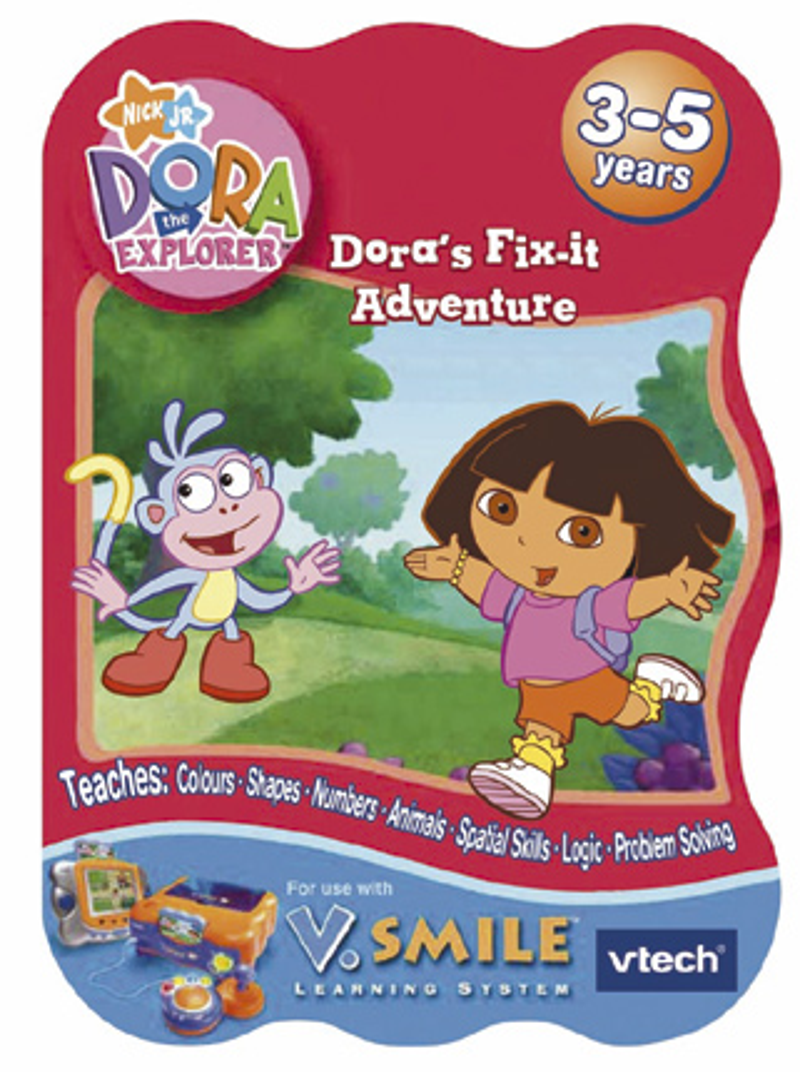 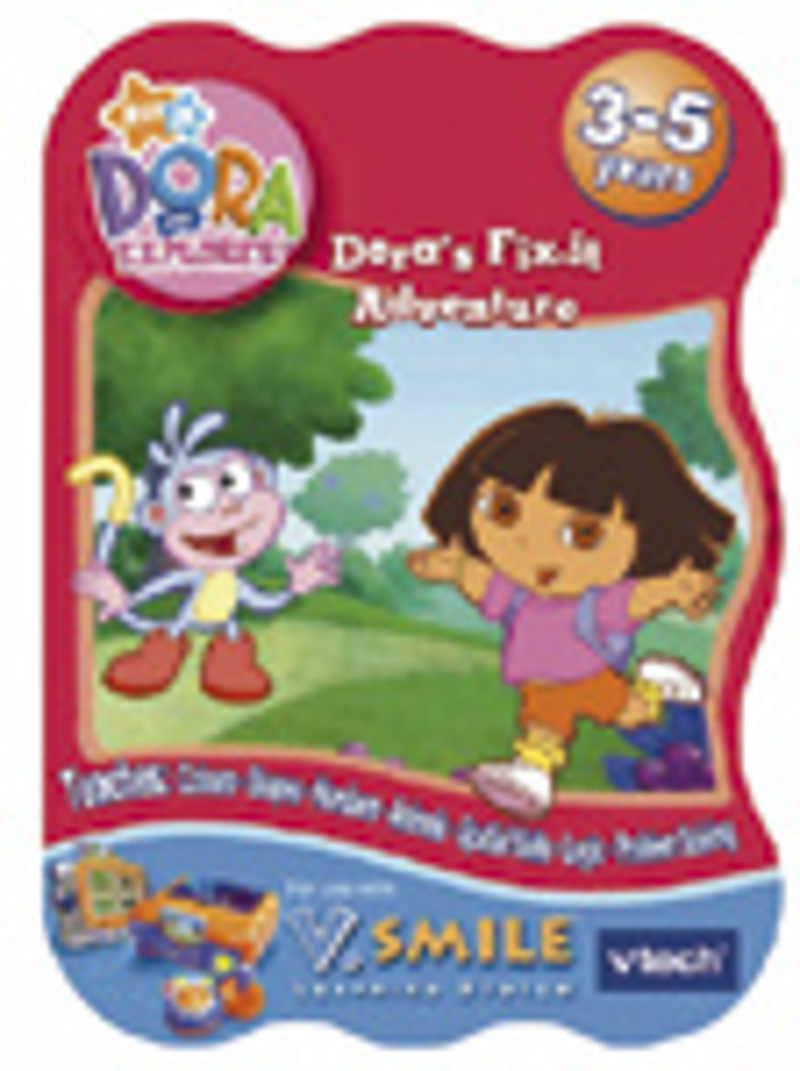 Whilst we are able to appreciate the benefits of these learning systems there is no empirical evidence as yet that the electronic experience is a better learning experience than sitting with mum or dad, granny or granddad and reading a book. Children are proven to learn most through close interaction with parents so it could be that the benefits of these systems are best delivered through child/parent interaction and not, as some marketing blurb suggests, by the children engaging in solitary play.

However, the great thing about bringing a TV show to life in this interactive way is that the children do indeed, as Fisher Price claims, engage in an interactive rather than passive experience.

Setting up the product

It's fair to say that the convoluted nature of DVD interactive learning toys and consoles makes for a very difficult customer experience. Both Bubble and InteracTV require users to programme their DVDs through the input of codes. There are DVDs, cartridges, touch pads, flip books and a host of bumf that needs organising to get you up and going. We asked the parents to install the devices to the TV. Without exception they found it difficult and with children bursting with excitement to get playing all around them they all reported the experience as stressful! It's classic Christmas day fayre but one hundred times more complicated than just putting the batteries in.

All the parents expressed initial concerns about the complicated nature of the set-up. Interestingly, many of the mums said that they would leave the installation of the units up to the technically more able in their household. However, after set-up, Bubble and InteracTV were very simple to start again.

As with any computer it is the quality of the software that makes or breaks a product. In the case of our tests we were most interested in how the various licensed characters performed as learning tools. The results were very straightforward. Those brands that were inherently learning based performed well, those that were more entertainment driven performed poorly.

The most striking example of this was the SpongeBob programme from Fisher Price's InteracTV. The brand is not a pre-school brand and yet the product is absolutely a pre-school product: a disconnect. The gameplay was poor and the learning benefits questionable at best. However, when Nick Games turned its hand to Dora it made a quite exceptional piece of interactive gaming that the children really loved. This simply proves that, if the licence has education within it, it will transfer to these platforms with ease.

If there is a watchword for this category it is suitability. Make sure the licence stretches to electronic learning toys. All the parents without exception were complimentary when they could perceive the benefits the license offered their children but vitriolic in their comments when they felt it a case of label slapping. All marketers are aware of the damage a brand can suffer if it overstates a claim but in the developmental toy market this is greatly amplified. It is a more emotional space in which to market product rather than a disposable place, typical of other licensing disciplines. Developmental toys matter and brands need to understand this from the consumer perspective before they licence.

The products we tested were unlikely to be effectively used by many children of three years old. They simply do not attend this well, especially boys at this age! And given that children graduate to the PlayStation at around six, the window of opportunity where these products prove truly valuable is a mere 24 months. Even if older titles are introduced, most children will perceive these products as 'babyish' once they reach seven or so. There's simply too much other exciting stuff on offer and they will probably want to use a grown-up computer!

If there were a class for traditional electronic learning toys then the LeapPad would be at the top of it. It keeps learning to a book form but the multi-sensory nature of the product ensures children engage. The system is very different to the others; it is, in essence, an electronic book. The children did not engage quite as richly with the LeapPpad as with TV products but this is to be expected; TV consoles will always be more interesting to the children. The question is, are they any better at supporting learning? The LeapPad system is by far the simplest to use and could be argued to deliver the best learning experience. The page turning experience remains a difficult one and should be made more intuitive but with other manufacturers solving this problem we're pretty sure the most trusted electronic learning manufacturer is hot on the case.

Perhaps Bubble appears the least 'design-led' of the products we used and it was tricky to install. In many ways the physical build of the product is more reminiscent of what you might expect of Fisher Price; it's incredibly robust (if somewhat heavy for little people) and the buttons are big and chunky! It's functional, tough and made for the people who are going to use it. The children all loved the look of Bubble and were able to get going in a very short space of time. 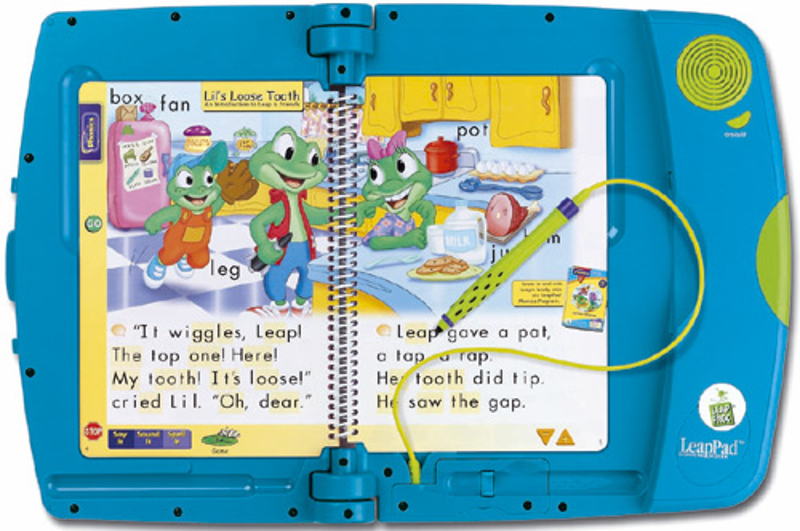 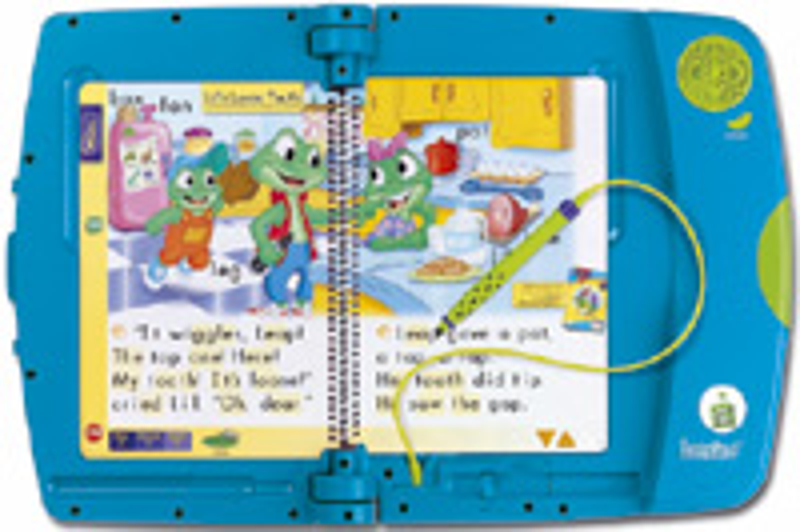 One key feature of Bubble is the away-play facility. Unlike its nearest competitor, InteracTV, children can play without a DVD player in much the same way as the LeapPad.

All the parents were impressed by the levels of interactivity and all the children engaged wholly with Balamory. The selection of licensed titles for Bubble all air on CBeebies and have learning in their very DNA. And this is one of the key reasons it's a winner. As with all good licensing you have to marry the product, the consumer and the licence and nowhere is this more true than in the pre-school market. As one parent put it "Why do I want my child developing their reading skills in an American accent?" 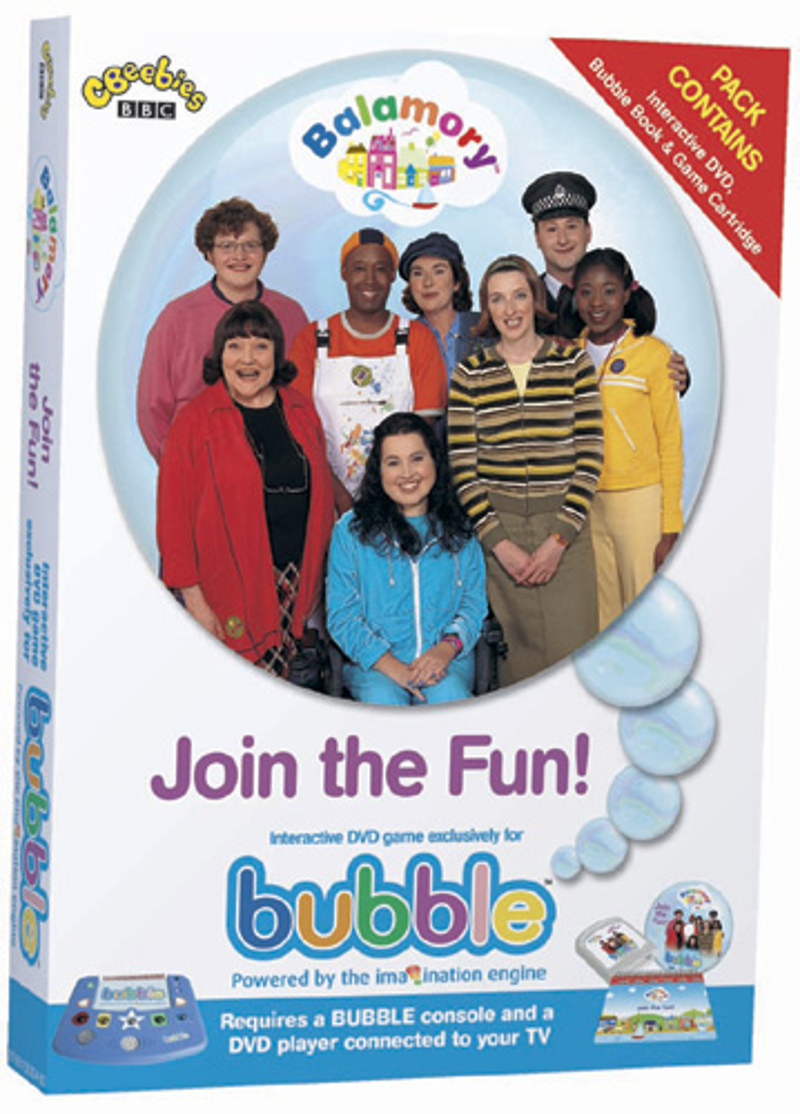 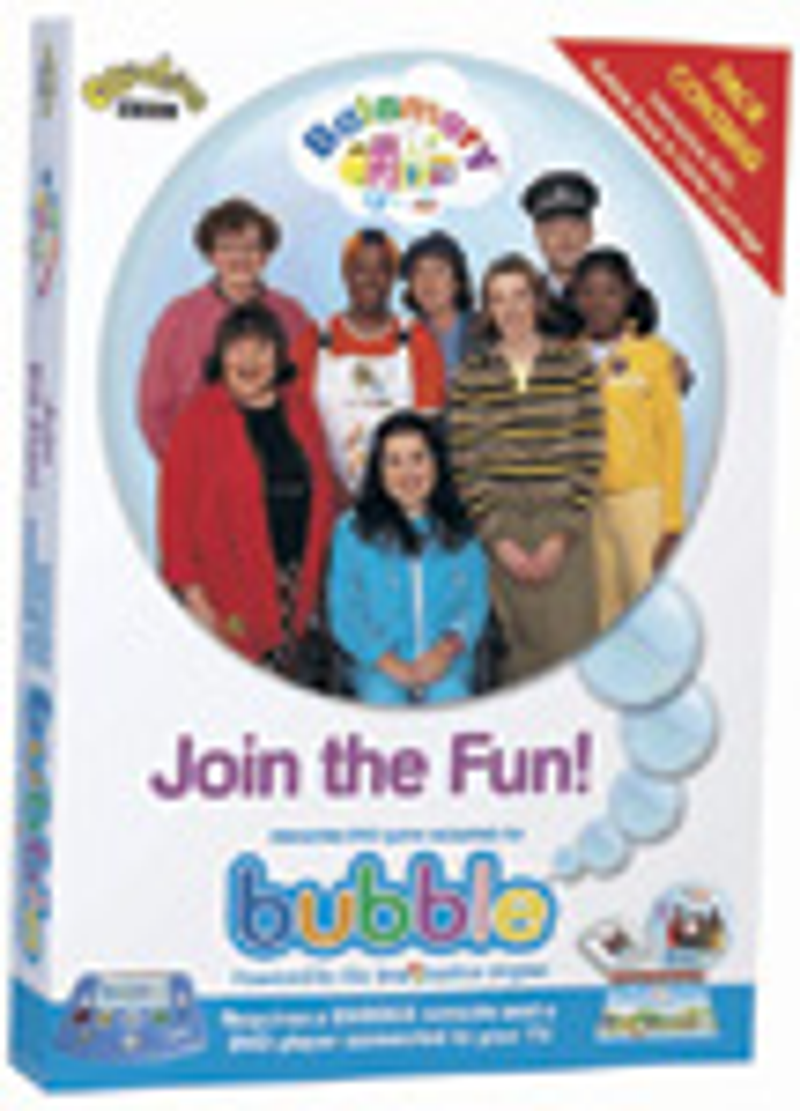 We found the unit very difficult to install on some DVDs but simple on others. The unit itself looks great and is easy for the children to manipulate. However, the forward and back keys were easily hit accidentally leading to a little frustration! Two parents were concerned that the console itself would become damaged by sustained use, particularly by boys that would want to use it as a steering wheel for their spaceship! 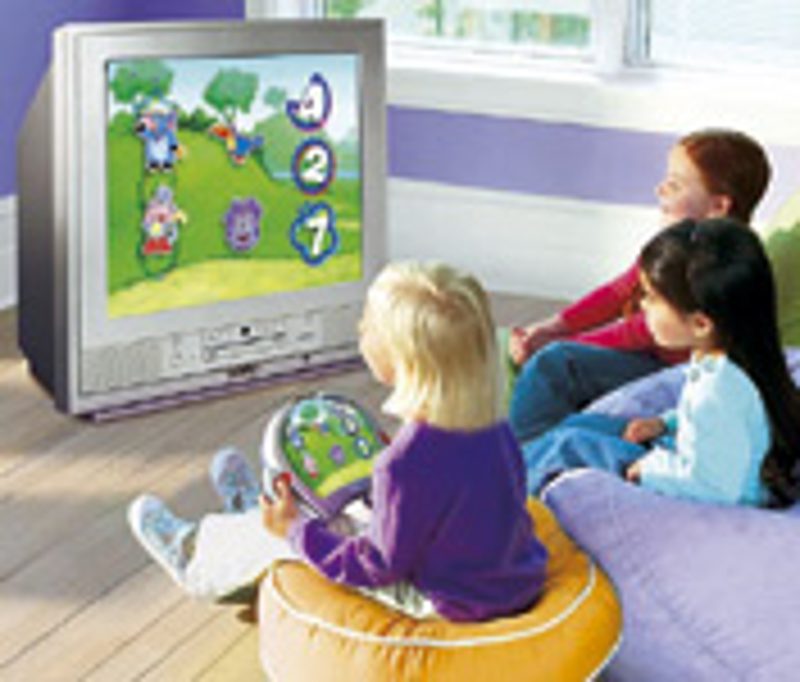 A great touch is that the multiple choice questions appear randomised each time you use the unit and prevent the children from simply recalling the answers.

The gameplay was lovely with the children really getting involved with Dora and Boots.

The biggest question mark for many of the parents was that each of the licences bundled with the unit were American with American voice-overs. While they understood that this is important, as the experience must replicate the television, they question whether it is appropriate for American voices (with some instances of American spelling) to be teaching English to British children. Overall, a very well liked product.

Perhaps the simplest to use; a simple scart plug-in and play device. Perhaps this should be termed "My First Games Console" and indeed V-Tech make no bones about this. As a solution for a pre-schooler wanting to play PS2 this is fantastic; as a learning system all parents, including the two that owned the console, felt that this was stretching the claim slightly. VTech cites a total of 16 developmental benefit categories but it does not communicate how these benefits are qualified. Maybe a missed opportunity? In our test we only had the bundled Pooh software and so it may well be that additional games are more salient in the delivery of the learning experience. 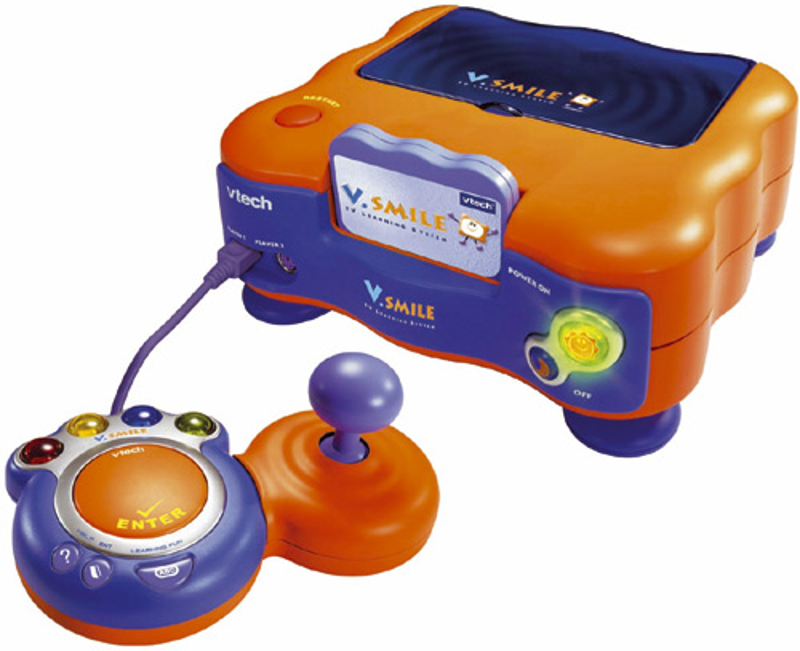 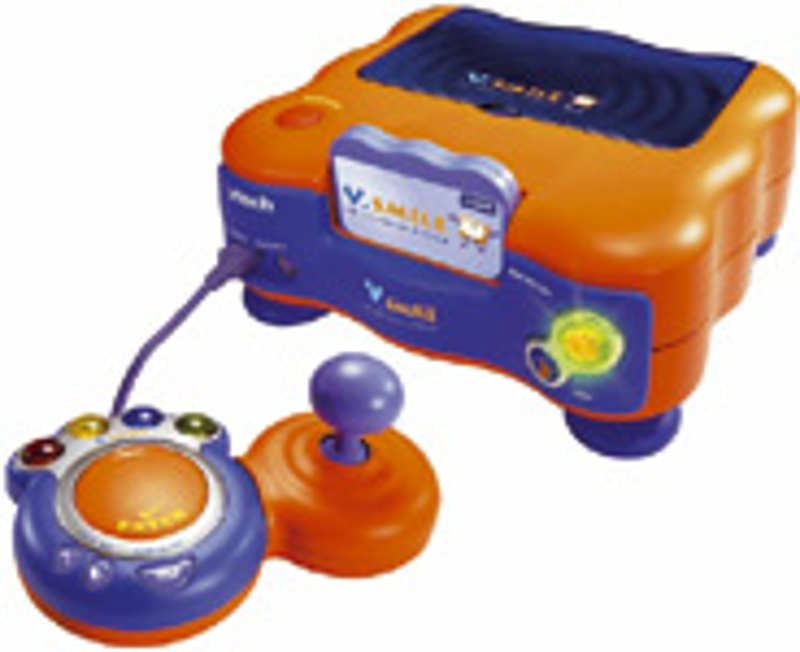 The ability to turn a joystick from left to right-handed use is an excellent and well thought through design feature and much appreciated by the left handed children and their parents.

Every parent would have liked an AC adapter to be included and one dad was determined to find the non-existent adapter in the packaging, despite the literature clearly stating the need to purchase this as an additional item.