While China and India are consistently talked about as countries of the future for licensed consumer products, Central and Eastern Europe and Russia are likely to prove faster areas of development.

Central and Eastern Europe and Russia comprise a set of countries that are just waking up to the world of licensed product in the mass markets. And with combined populations nearing 400 million people, the potential is massive. 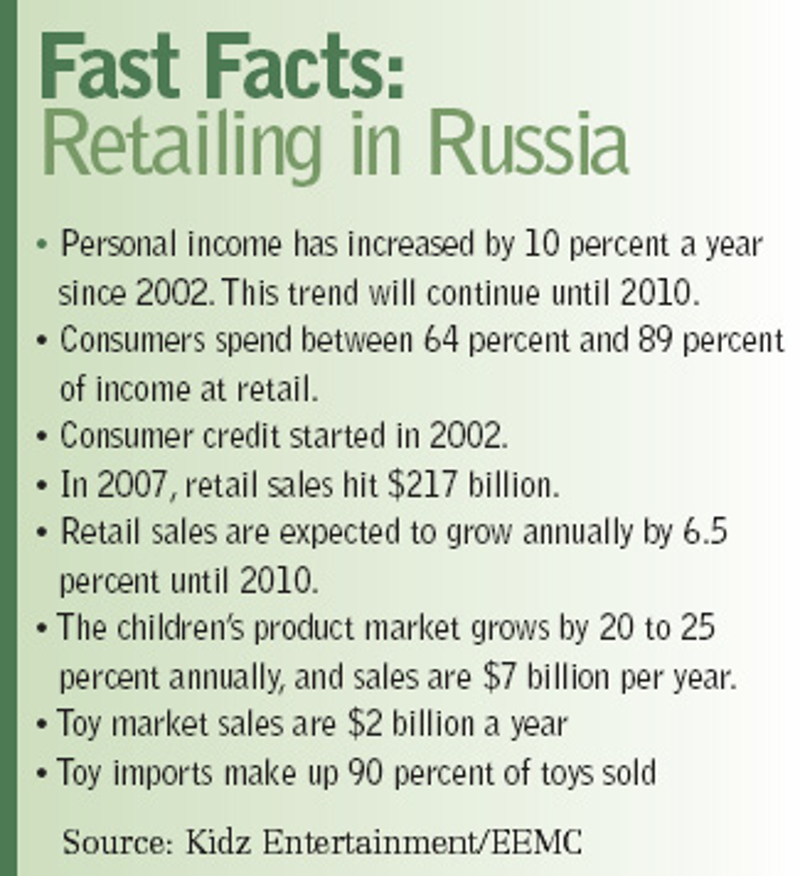 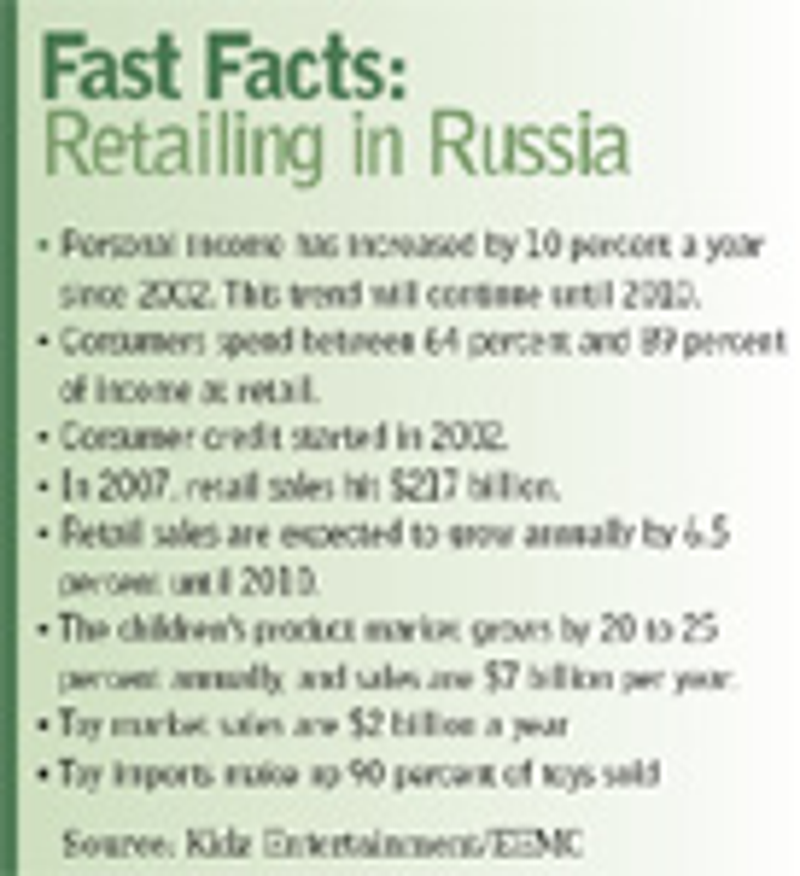 Small licensing events have been taking place in Warsaw for four years, opening up the market to a wider number of professionals and licensors from the west.

And as the countries that have recently joined the European Union settle and begin to benefit from the economic development that will bring, together with a greater uniformity of business practice, the market will develop further.

Some in the Western licensing industry believe that some of these countries are up to 10 years behind the level of Western Europe and the United States as far as licensed product is concerned, but other countries are just a couple of years behind—notably the Czech Republic, Poland, and Hungary. But they are catching up fast, and as European and Nordic-based agencies see the potential

of the markets, the CEE and Russia will be spared the learning curve that has occurred, sometimes painfully, in the traditional markets of Western Europe, the United States, and Japan. 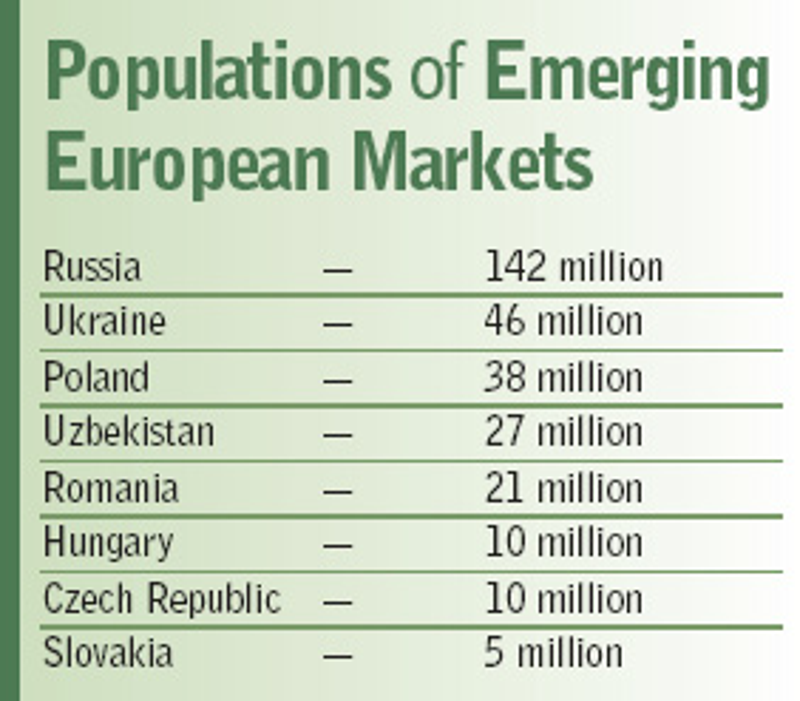 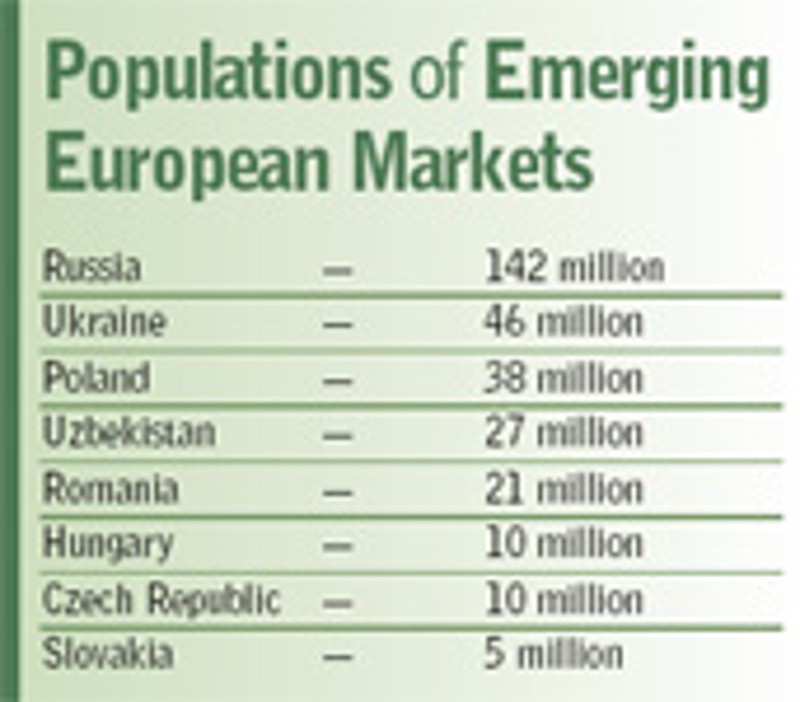 Stockholm-based Plus Licens has been operating in the CEE and Russia for 30 years, and opened its first Eastern European office in Warsaw in 1992. This was followed by a Moscow branch in 1994.

Eva Brännström, executive vice president, says the key markets for Plus Licens are now Russia, Poland, the Czech Republic, and Hungary. "But other markets are also growing and offer opportunities," she adds. "States of the former Yugoslavia, for example, are active and vibrant, and with combined populations of some 25 million, they are about the same size as the Nordic region."

Brännström is adamant, however, that every country in the region has its own personality, and that they are all at different stages of development for licensed products. "There is quite a difference between markets," she says.

Not only are the countries different in terms of the affluence of the populations, but also feature different regulatory regimes. Brännström gives the example that in Russia, the major broadcasting outlets are effectively state-controlled, whereas in other countries there is a combination of public service and commercial broadcasting as in the rest of Europe.

"Up until now, Russia has been a more difficult television landscape and, therefore, there has been a different basis for licensing brands," she says. "However, it also has strong local characters that originated in Russia's own animation studios." As a result, Plus Licens has started to work with licensees on homegrown characters specifically for the Russian market.

The Czech Republic also has an animation industry with a strong history, and is also producing its own characters for the home market.

Plus Licens uses local licensees, too, although product is increasingly outsourced to the Far East. Categories such as paper products, which are traditional in these regions, are produced locally. "Privatization has happened and multinationals have gone in," Brännström says. "But it does take time to get settled and find the right balance."

It's a Small World

Disney went into Russia and CEE early. Disney Consumer Products has been active in the Russian market since 1991 and Poland since 1993, working with local and international licensees such as Kimberly-Clark, Gillette, Energizer, Zizzle, and Megablocks, as well as Russian companies such as Mir Detstva (baby feeding), Steppuzzle (puzzles), Zvezda (board games), and Erich Krause and Academy Holding (stationery) in Russia.

The business is developing the food category with Disney's nutritional guidelines and is currently negotiating with milk and dairy manufacturers. It forecasts that its Russian market will be worth $4.9 million in 2007, representing 43 percent growth. Its Russian strategy focuses on core franchises and key categories, and is also looking to introduce new categories such as apparel and consumer electronics as Russia's retail infrastructure develops.

DCP started its operation in Poland in 1993 operating through Disney Licensing. It covers toys, homeware, infant products, stationery, food, and cosmetics categories for properties including Mickey Mouse, Winnie the Pooh, Disney Princess, W.I.T.C.H., and Power Rangers, as well as Disney animated films such as

Copenhagen-based Kidz Entertainment merged with Eastern European licensing agency EEMC last year and now has offices in Prague, Warsaw, Moscow, and Budapest as well as Copenhagen, London, and New York. It is already looking at the possibility of opening an office in the Ukraine. Anna Lisa McBride, CEO at Kidz Entertainment/EEMC, says, "We're applying the business practices from the Nordic business—based on brand building—to the new regions."

She maintains that some of the individual Eastern European countries are up to 10 years behind the level of product licensing in the west, adding, "but that is good for building a business."

"The market is still doing promotions and one-off deals. It's an exciting challenge because that's not how we run our business. We really want to apply our principles to Russia and Poland, but they are not used to it yet—nor are the sales teams. EEMC has done a phenomenal job, for example, around movie releases. But because of our portfolio, it is now possible to start opening doors with different partners and to look at brands, and not just characters."

Although copying has been an issue in the past—and as in every market, there is counterfeit product—McBride maintains that "luxury brands are very well established and Russians would rather spend extra money on the real thing than cheaper copies. There is real social status in having real brands."

While the CEE and Russian markets have some way to go before they hit the sophistication of the still developing Western European, U.S., and Japanese markets, these emerging markets will develop at a faster rate—with licensors and licensing agents leapfrogging the learning years.

Says McBride: "These markets will become sophisticated much faster than the western markets have done. Look at the television markets—they have only taken two or three years to catch up. We can see the opportunity in CEE, and we are expecting that there will be a fast return."

While the licensed product markets in CEE and Russia are currently largely focused on characters and kids, the way the regions have embraced international luxury goods is an indication of how branded licensed goods are likely to find markets. Russia and Hungary are notable in their demand for luxury goods.

And the push from European retailers like Tesco and Carrefour, and brands—particularly into Russia, Poland, and the Czech Republic—have opened up the market for mass-and middle-market product.

According to Peder Tamm, president of Plus Licens, which includes Warner Bros., National Geographic, and National Hockey League among its clients, it was H&M that opened Poland for Snoopy after the retailer took the character into the country on clothing through its store in Warsaw, and created demand for other products.

Tamm emphasizes that the markets are very different in terms of which characters take off. "Bratz is huge in Russia, but does not work at all in Poland. Superheroes are seen as old-fashioned in Poland, but Shrek is phenomenal," he says.

"When we were first in the market, copyright laws did not exist so what we did was very much a publishing-based kids' business. It had to be serious and educational. Design came later. The products were mostly locally produced paper products. There was low awareness and low price points. The sophistication level and expectation was low. But now disposable incomes are increasing and the potential is there. We are now especially looking for hot homegrown properties."

As Brännström says, "The markets are moving ahead quickly and becoming more like our home markets. For example, a recent survey found that Russian women spend 30 percent of their disposable income on makeup—and brands are important in that market. And for the younger generations in Russia and in Central and Eastern Europe, the move to global brands is normal."

One thing that all agree on is that the limiting factor on how quickly markets will develop is how much disposable income individuals have to spend, and the development of retailing. As a result, each country will not move forward at the same pace—but there is little doubt that they will move forward to be just as sophisticated as the mature Western markets.